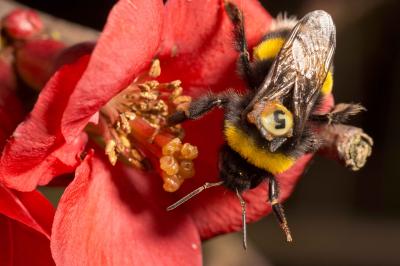 IMAGE: The secret lives of London’s bees will be uncovered thanks to a new project from Queen Mary University of London that attempts to find out what areas and which flowers they visit. Credit: Joseph Woodgate/QMUL

Hundreds of bees with individual coloured number tags will be released from the rooftops of Queen Mary University of London (QMUL) on Tuesday 21 June and over the next month for a project that hopes to uncover the secret lives of London’s bees.

Biologists from QMUL’s School of Biological and Chemical Sciences will attach weather-resistant number tags on the backs of bees, and encourage the public to identify them and take photos for a competition.

The London Pollinator Project aims to understand the bees’ preferred patches in London, in particular their favourite flowers, which reward them with nectar and pollen.

Five hundred bees will be released on Tuesday 21 June, and then several hundred more each week over the coming month as bee colonies mature.

Project leader Professor Lars Chittka, from the School of Biological and Chemical Sciences, said: “The fact that the bees have individual ‘license plates’ will allow anyone interested to develop their own science project, and ask scientific questions about the behaviour of bees.

“For example, citizen scientists might be intrigued to see the same bee return to their balcony and might record when during the day, how many times and which flowers they prefer. They may be curious about what these regular visits tell us about a bee’s memory for places and why certain bees prefer particular colour flowers.”

The project has already encouraged Londoners to plant flowers that are rich in nectar and pollen, like English lavender, viper’s bugloss, or spiked speedwell. Once the bees are released the researchers will be able to see how successful urban gardening efforts have been.

Professor Chittka added: “We hope that the observation of number-tagged bees in people’s gardens will raise an appreciation of insects as individuals – with individual memories of a particular flower patch, and with individual preferences for certain flowers that differ from those of other bees.

“And once you view animals as individuals rather than anonymous entities, you develop a connection with them, and a deeper understanding of why it’s important to assist with the conservation of threatened animals.”

The London Pollinator Project is funded by QMUL’s Centre of Public Engagement and School of Biological and Chemical Sciences.