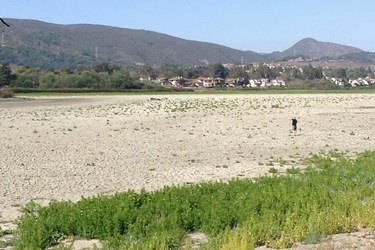 A company from Saudi Arabia is buying up water rights and setting up farming operations in the drought-stricken Southwest, ushering in a new round of controversy about the merit of American water laws that take pains to accommodate farmers.

“Almarai Co. bought land in January that roughly doubled its holdings in California’s Palo Verde Valley, an area that enjoys first dibs on water from the Colorado River. The company also acquired a large tract near Vicksburg, Ariz., becoming a powerful economic force in a region that has fewer well-pumping restrictions than other parts of the state,” The Associated Press recently reported.

Almarai is Saudi Arabia’s largest dairy company. The climate in the firm’s own country is too dry to farm alfalfa to feed to cows, the report said.

The land grab is controversial since Californians in urban areas are facing mandatory water cuts. Gizmodo described the circumstances like this: “Saudi Arabia is outsourcing its drought to California.” The purchases in the Southwest will enable the firm to benefit from U.S. water laws that are often accommodating to agriculture.

The AP reported: “The acquisitions have rekindled debate over whether a patchwork of regulations and court rulings in the West favors farmers too heavily, especially those who grow thirsty, low-profit crops such as alfalfa at a time when cities are urging people to take shorter showers, skip car washes and tear out grass lawns. Despite the widespread drought conditions, the U.S. is attractive to water-seeking companies because it has strong legal protections for agriculture, even though the price of land is higher than in other places.”

Gizmodo weighed in: “Why is the US such a great place to grow other people’s water-sucking crops? Because our government subsidizes agriculture in a way that many other countries do not. Which is great when you’re growing food to feed hungry Americans. But it doesn’t make a whole lot of sense when you’re using that land to grow foods that are shipped halfway around the world at a tremendous cost to the planet.”

“We’ve got them coming, moving in here and using our natural resources up. Why isn’t anyone paying attention to the ground we live on?” she said.

Christopher Thornberg, an economist at the University of California at Riverside, called alfalfa farms a “shocking waste of a resource,” according to the report.

“At some point in time,” he said, “we have to face the fact that the state cannot continue to prosper under the current circumstances.”

Curbed Los Angeles saw the Saudi land grab in another light: “This all falls into a push for water conservation in Saudi Arabia that’s translated into a ban on certain crops—this year Saudi Arabia will stop growing its own wheat. If there’s one thing to be grateful for in this continuing drought (at least, continuing in SoCal), it’s that we in California still haven’t gotten to [the Saudi level] of water rationing yet. Yet.”