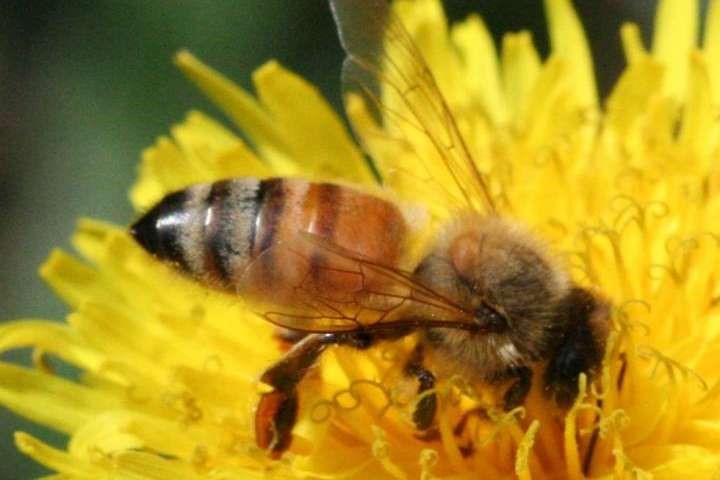 Honey Bee Abdominal Motion at 500 Frames Per Second (video) shows the motion of a honey bee abdomen at a frequency of 500 frames per second. view more

Honey bees are able to wiggle their abdomens in a variety of ways. Now new research published in the Journal of Insect Science shows how they are able to do it.

In 2015, a team of researchers from Tsinghua University in Beijing used a high-speed camera to observe how honey bees curl their abdomens while in flight and under restraint, confirming that bees can manipulate the shape of their abdomens, but only in one direction — down, toward the bee’s underside.

Now the same team has identified the mechanism behind that movement. Specialized membranes that connect a honey bee’s abdominal segments are thicker on the top of the abdomen than on the bottom, allowing curling in just one direction.

Honey bee abdomens contain up to nine overlapping segments that are similar to little armored plates. A thin, flexible layer of cells called the folded intersegmental membrane (FIM) connects the tough outer plates, allowing each concentric segment not just to attach to its neighbor, but to slide into the next one. The authors call this movement “telescoping.”

“Our research on the ultrastructure of the FIM is of great significance to reveal the bending and flexing motion mechanism of the honey bee abdomen,” said Professor Shaoze Yan, one of the co-authors. “During nectar feeding, a honey bee’s abdomen does high-frequency respiratory exercises and assists the suction behavior of mouthparts to improve the intake efficiency.”

In this experiment, the researchers looked at forager honey bees using the same combination of high-speed videography and scanning electron microscopy as they did in 2015. The engineers recorded the abdominal wiggling of live honey bees and the internal shapes of dissected bee abdomens. The flying videos were shot at 500 frames per second, and the dissected abdomens were imaged in thin slices.

The microscopy showed that the membranes along the top of the honey bee’s abdomen are two times thicker than those on the bottom. This asymmetry allows the segments to lengthen on top and contract on the bottom, resulting in the unidirectional curling the researchers observed in the bees they filmed.

It’s a design that the paper’s authors suggest is ripe for exploration by more engineers, perhaps for use in aircraft design or other applications.