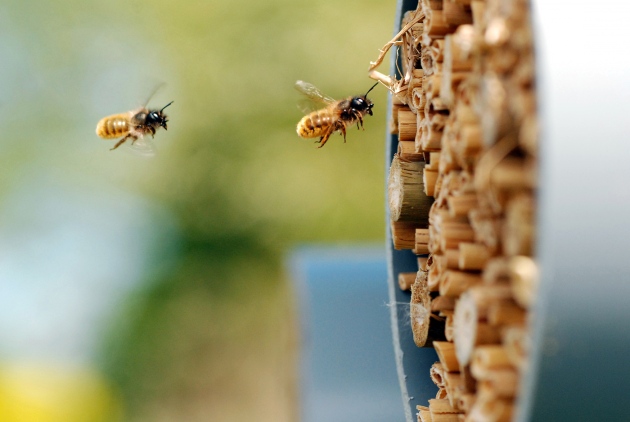 Researchers have monitored the health of the red mason bee (Osmia bicornis-rufa), which nests in hollow cavities.

Maj Rundlöf remembers the moment she changed her mind about neonicotinoids. In December 2013, in her office at Lund University in Sweden, she and postdoc Georg Andersson were peering at data from their latest study. It was designed to test what would happen to bees if they fed on crops treated with neonicotinoids — the world’s most widely used insecticides. “I didn’t expect to see any effect at all, to be honest,” says Rundlöf.

Hives of honeybees (Apis mellifera) weren’t greatly affected by the chemicals in their pollen and nectar, the study suggested1. But the data on bumblebees (Bombus terrestris) told a different story. Bumblebee colonies that hadn’t fed on the treated crops looked normal: they were packing on weight to survive the winter. But in the colonies exposed to neonicotinoids, the growth chart was a flat line.

When the Swedish study was published in April 2015, it made headlines around the world. It was the first to show that neonicotinoid chemicals — known as neonics — could harm bees in a real-world farming situation.

Bee populations are declining in many parts of the globe, a worrying sign for the crops and wild plants that rely on these pollinators for their survival. Parasites, disease and shrinking food resources are all prime suspects. But a link to neonics has become a major flashpoint.

Even before Rundlöf’s results were revealed, the European Union had placed heavy restrictions on the three most widely used neonics in flowering crops — plants that might be attractive to bees — amid rising concerns that the chemicals might harm pollinators. The restricted neonics were imidacloprid and clothianidin, made by agrochemical giant Bayer, and thiamethoxam, made by Syngenta. But farmers, the agrochemical industry and some scientists pointed out that the moratorium was precautionary and based on limited evidence, gathered mostly from lab tests.

Since Rundlöf’s paper, studies showing real-world evidence of harm from pesticides in the field have been mounting — and environmental organizations have demanded wide-ranging bans. Regulatory agencies will soon decide what to do about neonics, which have a global market worth more than US$1.5 billion per year. This month, the EU’s European Food Safety Authority is due to complete a re-evaluation of evidence for restricting neonics; the EU will then need to decide what action to take. The US Environmental Protection Agency is expected to complete its own review of the insecticides next year. France’s parliament has passed a law that would ban neonics in