The Asian honey bee on the right below is much smaller than the European species used for most Australian honey production. 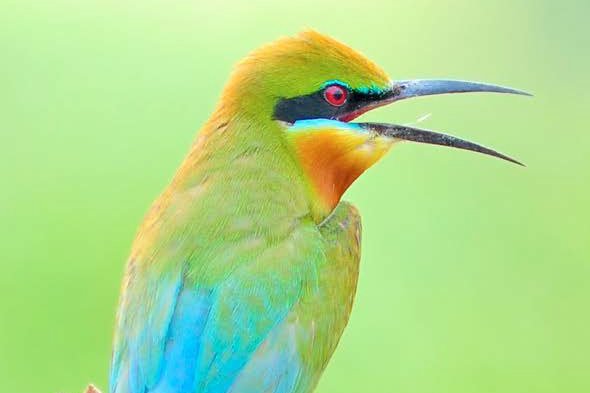 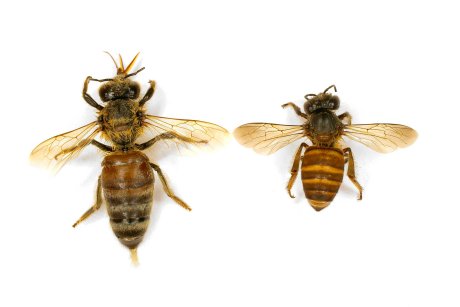 The rainbow bee-eater above can eat hundreds of bees a day, making its pellets a valuable resource for authorities.

(Supplied: Department of Agriculture and Fisheries)

The rainbow bee-eater can eat hundreds of bees a day, making its pellets a valuable resource for authorities.

It is a common dry season visitor throughout the tropical north, and now the rainbow bee-eater could hold the key to identifying the remaining varroa mite colonies that have made their way to Australia.

The biosecurity threat of a mite infestation could cost Australia more than $1 billion in lost production.

The National Varroa Mite Eradication Program (NVMEP) is calling on the public’s help to identify the rainbow bee-eater’s roosts in a bid to find any remaining Asian honey bee nests.

“The rainbow bee-eaters will actually regurgitate what they can’t digest throughout the day,” he said.

“We can then look at that regurgitated material and find the [indigestible] forewings of the Asian honey bee.”

The birds can eat several hundred bees a day, making the regurgitated pellets an excellent source of information about local bee populations according to Mr Anderson.

“It’s a presence and absence test, so we can actually tell whether the Asian honey bee is in the localised area,” he said.

“To date this year we’ve collected over 4,000 pellets and we haven’t found any Asian honey bee forewings in any of those pellets. So it’s all positive at this stage.”

With no confirmed Asian honey bee nests found since November last year, the eradication program has transitioned to a proof of area freedom stage that will continue until August 2019.

Mr Anderson thanked the public and beekeeping clubs for their help so far in fighting the varroa mite incursion.

“Without the public and local clubs being involved it would make our work a lot harder,” he said.

“The success of the NVMEP in Townsville depends heavily on community and club involvement.”

The new president of the Queensland Beekeepers’ Association, Bryce Jensen, said he has been happy with the hard work of the NVMEP but vigilance is needed.

The Kingaroy apiarist said the Asian honey bee infestation in Cairns showed that failure to manage invasive pests could cause a biosecurity headache.

“There was maybe only one nest missed, the guard was taken down and off they went,” he said.

“If we could find one more Asian bee in Townsville we would get full government funding again and a lot more government feet on the ground. That’s why we need to really be looking now in springtime when swarming happens.”

Mr Bryce said once established, the mite-carrying bees would prove impossible to eradicate.

“We know that it would have devastating effects. It would be a whole new learning field … a real battle.”