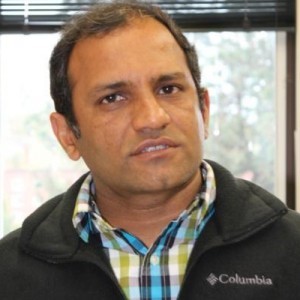 Protecting bees from pesticides just got easier with the release by Oregon State University of a smartphone app that farmers and beekeepers can use to consult a publication when they’re out in the field. The smartphone app accompanies OSU Extension’s 2013 publication, “How to Reduce Bee Poisoning from Pesticides.”

Farmers and beekeepers can now remotely consult the publication’s pesticide tables on their phones or tablets. The popular guide lists 150 insecticides, fungicides, miticides, slug killers and growth disruptors—all of them now searchable by trade name or chemical name in the new app.

“Our stakeholders have been asking for an app to go along with this publication, and they’re very excited that we now have one.”

“How to Reduce Bee Poisoning” was first published in 2006. It was expanded in 2013 by coauthor Louisa Hooven, a toxicologist and bee expert in the College of Agricultural Sciences, with an extensive update of the pesticide information.

“We looked at the crops grown in the Northwest,” she said, “and then at all the products that are likely to be used when the crop is flowering—which is when the bees will be foraging. Those were the pesticides we included.”

Products are sorted into three classes: highly toxic, toxic and “no bee precautionary statement on label.” The ratings are based on the cautions and restrictions required by the Environmental Protection Agency and listed on the products’ labels, Hooven said.

In addition, the guide estimates “residual toxicity” for several of the products—that is, how long their harmful effects persist in the environment. That information, which is not required by the EPA and may or may not be on the label, came from Hooven’s extensive search through EPA risk assessment documents and the toxicology literature.

“Pesticides will affect these species differently than honey bees or other managed species,” said Hooven, “because they have different life habits and are present at different times.”

West Coast agriculture is critically dependent on pollinating insects, said Sagili, who has authored or coauthored four other Extension publications on honey bees.

“Crops in the Midwest, such as corn and soybeans, don’t require insects for pollination,” he said. “But with our diversity of crops, especially our fruit trees, berries and seed crops, we really need them.”

Oregon beekeepers manage about 70,000 commercial honey bee hives, he said. The bees pollinate about 50 Oregon crops, including blueberries, cherries, pears, apples, clover, meadowfoam and vegetable seed. Sagili estimates the value of these crops at more than half a billion dollars yearly.

The best protection for bees, he said, starts with good communication between grower and beekeeper.

“Pesticide use and bee protection are not mutually exclusive,” he said. “There’s a balanced way to control pests and protect bees, both. We want this guide to be a useful tool for growers and beekeepers to make informed decisions together.”

The publication and accompanying app are available from OSU Extension and Experiment Station Communications (EESC). A user survey is included, and users are asked to complete it to guide EESC in future improvements of the app.

How to Reduce Bee Poisoning” was produced jointly by OSU, the University of Idaho and Washington State University. Its cost was underwritten by beekeeper associations in Oregon, Idaho, Washington, and California, and by the Oregon Department of Agriculture.