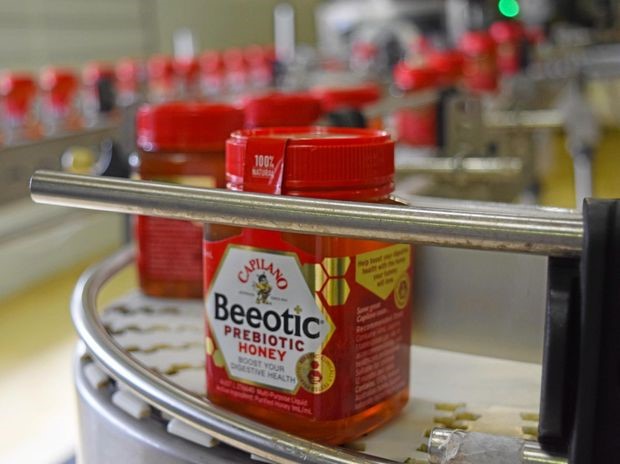 EMPLOYEES at Australia’s largest honey company have been working like busy little bees for the launch of the world’s first clinically-tested prebiotic honey.

Capilano Honey has unveiled its sweet new product, Beetoic, which has been formulated to raise the levels of good bacteria and suppress potentially harmful bacteria in a person’s digestive system.

Capilano worked closely with researchers from the University of New South Wales over a number of years to confirm how a prebiotic honey could provide health and wellness benefits to consumers.

Speaking at their Richlands head office and manufacturing warehouse, Capilano managing director Dr Ben McKee said his company had made a considerable investment into developing industry-first testing methods to identify honeys that deliver the prebiotic content.

“Each batch of Beeotic honey is independently tested using our pioneering technology which we are in the process of patenting,” he said.

“The tests look for particular sugar profiles in order to identify which honeys contain the required prebiotic components. Nothing is added, nothing is taken away. Beeotic is just 100 per cent pure Australian honey.

“Best of all this premium quality prebiotic honey is made right here in Australia, collected by our network of Australian beekeepers.”

This product, which has been made in Richlands with honey provided by Australian beekeepers, will be distributed to supermarkets both nationally and internationally.

Capilano Honey has been manufacturing its products out of Richlands for six decades. Its warehouse employs more than 180 people, with roughly 150 of those workers residing in the south-west region.