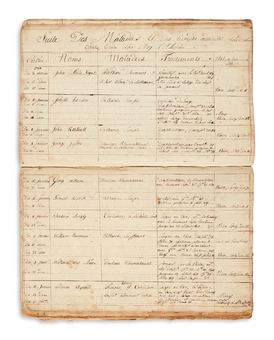 A fine selection of unique material features the archive of the Ponds, a missionary family living on the Minnesota frontier, valued at $30,000 to $40,000. Spanning nearly the entire nineteenth century, their correspondence recounts interactions with local Native Americans and attempts to convert them to Christianity.

A number of ships’ logs, both military and merchant, is led by an unpublished medical journal kept by physicians aboard the USS Deane and other ships in the Continental Navy from 1779 to 1788, estimated at $20,000 to $30,000. One of the doctors who contributed to the journal was a man named Peter St. Medard, who is additionally represented in the sale by the journal he kept between 1772 and 1822, during which he observed an American naval attack on Tunisia ($6,000 to $9,000). A whaling journal from a mutinous 1839-46 voyage to the South Pacific is valued at $8,000 to $12,000, while several logbooks feature ever-popular examples of whale stamps.

Making its auction debut is one of two known first editions of The Honolulu Merchants’ Looking-Glass, an 1862 pamphlet printed and distributed anonymously that slanders many of the city’s leading merchants and makes for a titillating glimpse into the lives of nineteenth-century Hawaiians. The present copy is believed to have belonged to the instigator’s compatriot, and passed by descent to the current owner ($6,000 to $9,000). Hawaiian material continues with The Second Interregnum: A Complete Resume of Events from the Death to Burial of His Late Majesty Lunalilo, 1874, with a tipped-in albumen portrait of the new King Kalakaua, expected to sell between $2,500 and $3,500.

A blossoming section of photography includes fine vernacular albums and portraits, led by a book of cyanotypes showing the construction of the Williamsburg Bridge from 1897 to 1903, compiled by W. Radford Bascome ($4,000 to $6,000). Also available is McClees’ Gallery of Photographic Portraits of the Senators, Representatives & Delegates, 1859, one of the earliest photographically illustrated books published in the United States, valued at $10,000 to $15,000.

Astonishingly, the first printed eyewitness report of the Wright brothers’ flight appeared in the January 1, 1905 issue of the periodical Gleanings in Bee Culture. Amos Ives Root, the publisher and author of the magazine, confesses that he had asked the brothers how they got the plane back up to the top of the hill after flying it off ($1,500 to $2,500).

An illustrated auction catalogue is available for $35. For further information and to make arrangements to bid, visit www.swanngalleries.com.