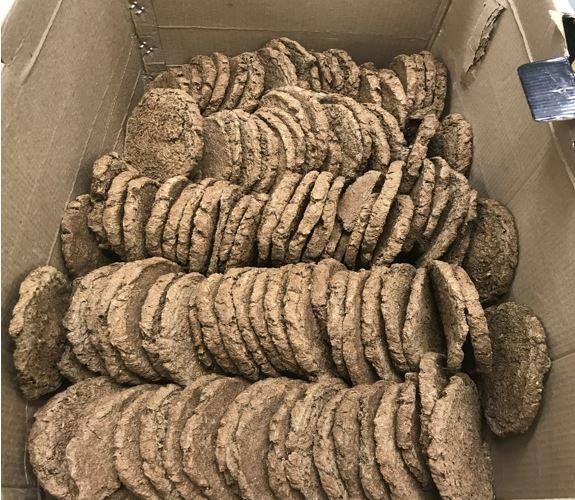 Australian border agents intercepted 296,606 biosecurity risk items –a one of them 12 lbs. of cow dung – at international airports last year.

The flood of threatening smuggled products forced the government to raise biosecurity spending by more than 23% to A$783.2 million (US$608.1 million).

The aim is to minimise the risk of exotic pests and diseases entering Australia and protecting the A$32-billion (US$24.8 billion) agriculture export industries as well as the unique environment and wildlife.

They only have to look 1,200 miles east to New Zealand, where a single honeybee queen smuggled in in a matchbox, decimated the country’s beekeeping sector because it was carrying Varroa mites.

Some of the items found have Australian agents scratching their heads.

They ranged from the cow dung detected in Brisbane to a live toad found hidden in shoes in Melbourne.

“We intercept a lot of biosecurity risk items and most of the time it’s a case of been there, dung that,” a spokesman said, tongue-in-cheek.

“However, we do sometimes come across things that make us think. This particular passenger told our biosecurity officers that he was carrying food items.

The patties were covered with ghee and going to be burned to help with meditation, but they could have been carrying a range of biosecurity risks.

One disease the Aussies worry could be brought in on these types of items is foot and mouth disease, which could cost Australia more than A$50 billion (US$38.8 billion) over 10 years and ruin the important beef, sheep, dairy and wool industries.

The black-spined toad took a nap in a shoe outside a Thailand hotel. The shoe belonged to a tourist who was on a plane back to Australia the next day. The tourist wore the shoes back to Australia and when they were being screened by a biosecurity officer, the shoe elicited a reaction from a detector dog.

It was a good intercept – the toad was a significant biosecurity risk, potentially more damaging than the cane toad.

“Although some of the finds sound like a bit of a joke, this is no laughing matter,” he says.

“Even something as harmless as a flower could be carrying exotic insects with the potential to cripple our horticulture industries.”

Littleproud is concerned that despite high-profile campaigns including warning broadcasts on incoming flights, the number of passengers trying to bring high risk food items, such as meat and fruit, into Australia is increasing.

Seafood interceptions were high across most international airports, with 7,717 items detected.

As well, the 6,000 strong Australian Border Force, which receives more than 52,000 reports a year from industry and members of the community, intercepted more than seven tonnes of major drugs, 380 tonnes of illicit tobacco and 1,700 illegal firearms.