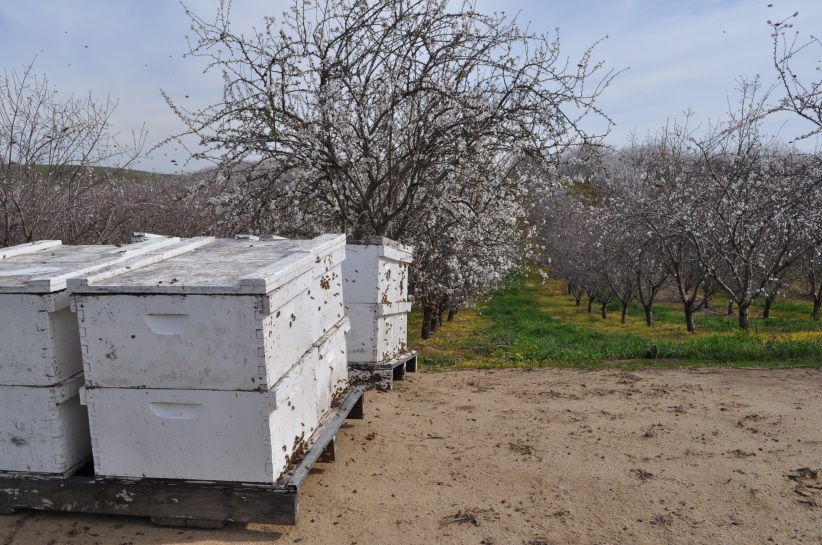 Did you know – pollination has become the top income source for beekeepers nationwide—accounting for $338 million in revenues in 2016, compared to $336 million for honey

Almonds and honey bees depend on each other, and pollination fees for almond orchards have stabilized after sharp increases a decade ago: Those are among conclusions of a report from the Giannini Foundation for Agricultural Economics at the University of California.

Titled “Bee-conomics Revisited,” the report said prices charged for almond pollination have remained steady “because an efficient system has quickly evolved to deliver bees to the expanding almond acreage, even with fluctuations in disease pressure on the honey bee industry.”

Citing U.S. Department of Agriculture statistics, the UC report said pollination has become the top income source for beekeepers nationwide—accounting for $338 million in revenues in 2016, compared to $336 million for honey — and that beekeepers “tend to specialize among revenue-generating alternatives.”

“The jump in the 2006 pollination fee was likely caused by a sudden reduction in supply when the colony collapse disorder (affecting beehives) first appeared over that winter, which left the almond orchards with too few bees,” the study said. “The jump in fees was needed to draw bees out of other activities and from across the United States with little preparation time.”

Since 2006, the report said, almond-pollination fees have stabilized at between $150 and $160 per hive, which appears sufficient, “together with income from other activities, to attract enough colonies to the almond pollination each February.”

In part, that could be because colony strength has improved, the study said, citing “informal evidence that the number of active bees per colony has increased over the past decade.”

The UC report also tracked pollination fees for other crops, noting a range in fees from $18 for prunes, which are pollinated after the almond-blossom season, up to $185 for plums, which overlap with almonds.

“The difference in fees between plums and prunes exemplifies the importance of pollination seasonality,” the study said, noting that the potential of honey revenue from a crop also appears to affect pollination fees.

According to the report, beekeepers face many challenges in supplying the approximately 2 million colonies needed for almond pollination.

“Honey bee disease management, control of mites and other pests, and effective and healthy long-distance transport are vitally important,” the study said. “The search for safe and secure forage before and after almond pollination, and cost-effective honey production, are also economic and management challenges facing beekeepers.”

With the close ties between beekeepers and almond farmers, changes in the almond market would also have significant repercussions for the bee business, the report said.

“When almond acreage stops growing or even begins to recede, pollination prices and hive counts in almonds will recede,” the study said. “With about two-thirds of all commercial hives relying on almonds for a large share of their revenue, any almond reversal is serious for the population of honey bees.”

The article was written by Hyunok Lee, a research economist at UC Davis; Antoine Champetier, a visiting lecturer at the campus; Daniel Sumner of the UC Agricultural Issues Center; and Jennifer Bond, a USDA economist.