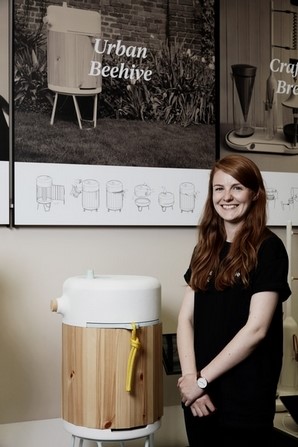 An industrial design and technology graduate from Loughborough University’s design school has created an intelligent beehive using UV-stablised polythene as part of her final-year project.

Ellie MacLeod wanted to create an urban beehive that would make beekeeping more accessible by removing the need for specialist equipment while also ensuring that her hive was the best possible environment for honey bees.

Her final product, Mella, reduces the risk of stings by removing as much direct contact as possible. Budding beekeepers can watch their charges by removing a wooden outer shell to look through the device’s clear plastic dome. This allows beekeepers to view inside the hive without opening it up, reducing the risk of disturbing the bees or introducing infection into the colony.

“The hive itself is mostly rotationally moulded from UV-stabilised polyethylene,” said MacLeod. “This allows for each plastic part to consist of two thin wall sections with a void in-between, which is perfect for creating better insulation. The temperature within the hive needs to be kept at a very steady and specific range to allow the bees to work with and mould the wax.

“There is a built-in honey collection system in the hive’s top section, which uses centrifugal force to release the honey from the comb. This then collects into a specially designed funnel where the honey passes through two varying meshes to remove debris such as wax and dead bees. The beekeeper can then siphon off the honey.”

The hive also features humidity and temperature sensors and a microphone to monitor hive acoustics. Data from these devices can be checked via a mobile app.

MacLeod, who was awarded the title of ‘New Designer of the Year: Runner Up’ at the New Designers 2016 Exhibition 2016 in London, is now looking for work at a design consultancy.

She added: “I’m really excited to see what will happen next with the project. I want to make beekeeping more accessible for the next generation of bee keepers and attract more young people to the hobby.”