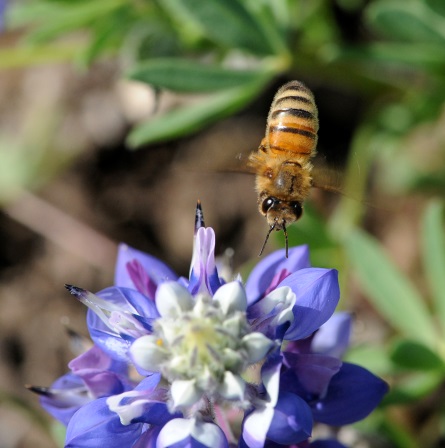 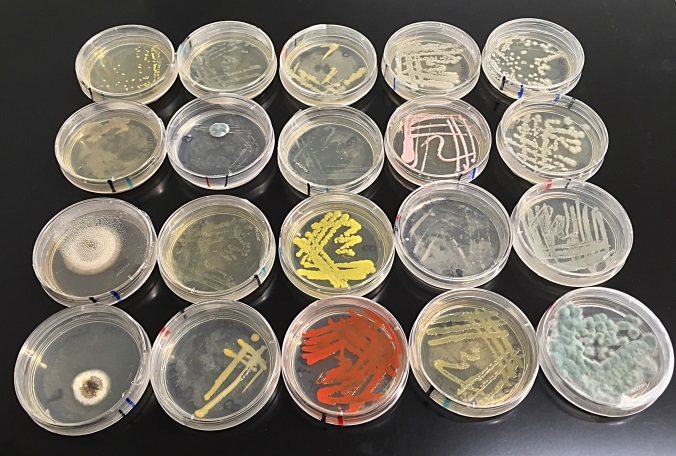 Above left: Honey bee heading toward lupine. Bees are drawn to the scent of blossoms but nectar-living microbes release scents or volatile compounds, too, according to newly published research by UC Davis community ecologist Rachel Vannette. (Photo by Kathy Keatley Garvey)

Hear that honey bee buzzing toward a flower? It’s not just the nectar that she’s scented.

The groundbreaking research, published in the current edition of New Phytologistjournal, shows that nectar-inhabiting species of bacteria and fungi “can influence pollinator preference through differential volatile production,” said Vannette, an assistant professor in the UC Davis Department of Entomology and Nematology.

“This extends our understanding of how microbial species can differentially influence plant phenotype and species interactions through a previously overlooked mechanism,” Vannette said. “It’s a novel mechanism by which the presence and species composition of the microbiome can influence pollination.”

“Broadly, our results imply that the microbiome can contribute to plant volatile phenotype,” she said. “This has implications for many plant-insect interactions.”

Their paper, titled “Nectar-inhabiting Microorganisms Influence Nectar Volatile Composition and Attractiveness to a Generalist Pollinator,” may explain in part the previous documented extreme variation floral volatiles that Robert Junker of University of Salzburg, Austria, and his team found; New Phytologist published their work in March 2017.

In their study, the Vannette team researchers first examined field flowers for the presence of nectar-inhabiting microbes, and in collaboration with co-authors Caitlin Rering and John Beck of the U.S. Department of Agriculture’s Agricultural Research Service (USDA-ARS), Gainesville, Fla, characterized the headspace of four common fungi and bacteria in a nectar analog. Next, they used an intricate setup to quantify the antennal and behavior responses of honey bees to the chemical compounds. Finally, when they examined the scent of flowers in the field, they found that flowers which contained high densities of microorganisms also contained volatile compounds likely produced by those microbes, suggesting that microbial scent production can be detected and used by pollinators.

Although microbes commonly inhabit floral nectar, microbial species differ in volatile profiles, they found. “Honey bees detected most of the microbial volatiles or scents that we tested,” Vannette said, “and they distinguished the solutions of yeasts or bacteria based on volatiles only.” This suggests that pollinators could choose among flowers based on the microbes that inhabit those flowers.

The yeast Metschnikowia reukaufii produced the most distinctive compounds (some shared with the fruity flavors in wine) and was the most attractive of all microbes compared. This yeast is commonly found in flower nectar and is thought to hitch a ride on pollinators to travel from one flower to the next. Its scent production may help it attract pollinators, which then help the yeast disperse among flowers.

The USDA and USDA-ARS funded the research.

Aaaah, summer…what can be better than summer’s many pleasures, like hearing birds singing, and watching bees and butterflies flit from flower to flower? Most…