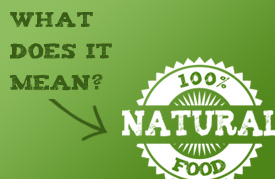 A FOOD Dive Brief: From www.fooddive.com

The Food and Drug Administration has still not defined the term “natural,” although a comment period on whether and how to define it on product labels closed in May 2016.

Meanwhile, several lawsuits have been filed against brands making natural label claims, sometimes leading to companies settling with consumers to avoid lengthy and potentially costly legal proceedings. General Mills had two legal cases over using it as a label claim. In 2014, it settled a lawsuit over use of the phrase “all-natural” on some of its Nature Valley products. The agreement prevents the company from describing products that contain high fructose corn syrup or maltodextrin as “natural.” Earlier this month, a lawsuit about whether the company could define its ingredients as “100% Natural Whole Grain Oats” — while the granola bars contained trace residue of weed killer glyphosate — was dismissed. The judge ruled the claims against Nature Valley were “simply not plausible.”

Defining the term is an undeniably difficult task for the FDA, considering the variety of ways in which consumers – and industry – understand it. The Grocery Manufacturers Association has said that agricultural practices, such as genetic modification and animal husbandry, should have no bearing on whether a food is deemed natural or not, since it could cause confusion between organic and natural products. However, according to consumer comments received by the FDA, many would like to see GMOs excluded from any definition of “natural.”

Nevertheless, GMA has urged the FDA to move forward with a definition to help dispel confusion surrounding the term.

The authors of this latest review also highlighted potential difficulties for novel food technologies, such as cultured meat and 3D food printing, predicting a low level of consumer acceptance if these products are perceived as unnatural. Proponents of cultured meat, for example, are already taking action on how the concept of lab-grown meat is communicated, with some companies favoring the term “clean meat” to highlight its lack of antibiotics, food safety challenges and waste contamination.