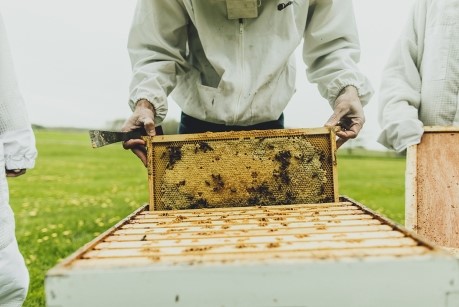 A small mite is causing big trouble for New York’s honeybee population and putting in peril the fruit and vegetable crops that depend on these pollinators.

The varroa mite is a common parasite that weakens honeybee colonies by feeding on bee blood and fat stores, and transmitting deadly viruses across the colony. One of those viruses, deformed wing virus, causes misshapen wing growth in infected bees.

“When colonies have high levels of deformed wing virus, the affected bees are unable to fly and die at a young age,” said Emma Mullen, honeybee extension associate and senior lead of the beekeeper team. “It can be quite detrimental – varroa mites and their associated viruses are a leading cause of death for honeybee colonies.”

Even more alarming, according to Mullen, is that 78 percent of operations had varroa mite levels that exceeded the economic threshold of 3 mites per 100 bees, an important predicator that the colony will die within one to two years or experience reduced honey production. Surpassing that threshold demonstrates that the mites are not being managed effectively and are posing a critical risk to colony health, Mullen said.

Mullen and Scott McArt, assistant professor in the Department of Entomology in the College of Agriculture and Life Sciences, have been collaborating with beekeepers throughout the state to find ways to keep their bee colonies healthy. Working in the Dyce Lab for Honey Bee Studies, the Cornell scientists are tasked with improving the profitability and viability of beekeeping businesses of all sizes.

When it comes to varroa mites, this collaboration is more necessary than ever. The Cornell team found that, despite rising infestations, only 36 percent of beekeepers were monitoring mites in 2016. The high mite levels suggest that the current management approaches New York beekeepers are using may not be effective.

David Hopkins, a midsized beekeeper with more than 40 years of beekeeping experience, says he once controlled mites by using simple methods such as dusting powdered sugar in hives. Now, because of the increase of viruses, he knows his colonies are always at risk of infestation and collapse, and require more intensive management practices than in the past.

“It’s been a challenge to stay ahead of the curve regarding varroa,” Hopkins said. “We’ve been flying by the seat of our pants as beekeepers and relying on the Dyce Lab to help us get along. Every beekeeper needs a whole cadre of scientists and interpreters behind them.”

The beekeeper team assists beekeepers like Hopkins by surveying their colonies for parasites, pathogens and pesticides, and analyzing the beekeepers’ management practices. The team works with the beekeepers to develop an integrated pest management plan that will reduce colony losses through monitoring and a variety of potential treatments. The team has also begun offering a business analysis and benchmarking program, led by Mary Kate Wheeler, the team’s agricultural economist.

“A lot of beekeepers we are meeting with are losing unsustainable numbers of their colonies each year. By helping with their colony health, we are helping their business,” Mullen said.

This summer McArt is also taking a citizen-science approach to combating varroa by encouraging beekeepers across the state to sample their own hives now and again in the fall. The beekeepers will then be surveyed about their management practices to determine the best methods for managing varroa in New York.

“We are committed to helping beekeepers maintain their business and help our farmers in the process,” McArt said. “We can see if there is year-to-year variation or if there are consistently certain types of management practices that are much better for beekeepers than others.”

David Nutt is a freelance writer.