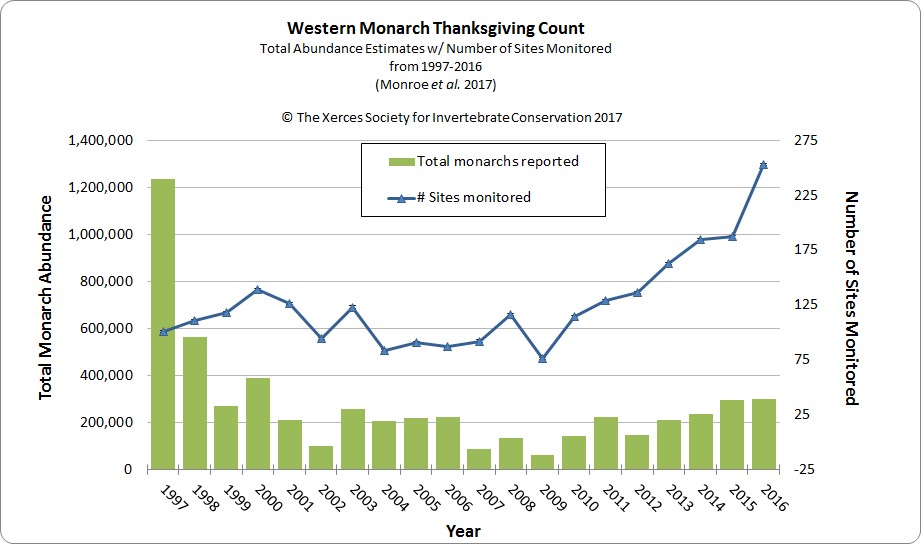 In the fall of 1997, a small group of dedicated monarch scientists and volunteers set out to count how many monarch butterflies were overwintering in California, an essential step in understanding and conserving this remarkable insect and its migration. Twenty years later, the Western Monarch Thanksgiving Count (WMTC) is established as one of the longest running insect conservation projects in the country and is the most comprehensive effort to monitor overwintering monarchs in California. The dedication is undiminished and the counting effort has swelled: The WMTC marked its 20th anniversary with more than a hundred enthusiasts spreading out along the California coast to find and count monarchs.

Thanks to the efforts of so many people, this year’s WMTC tallied a total of 298,464 monarchs. A glance at the graph suggests reason for celebration, but it’s not. This number is because more people visited more sites rather than there being more butterflies at each site—and the total is less than a quarter of the 1.2 million monarchs recorded in the late 1990s. Key sites such as Pismo Beach and Natural Bridges hosted fewer butterflies this year, and all but one of the 15 sites which have been continuously monitored since 1997 had lower counts than prior years.

This long term decline was illustrated by a recent analysis of the two decades of WMTC data, which documented a 74% decline in California overwintering population since the late 1990s—mirroring the steep decline observed at the monarch overwintering sites in the state of Michoacán, Mexico, to where a fraction of western monarchs migrate.

There are a few positive findings from this year’s results. Four new sites were documented in Southern California and a private site in Monterey County hosted over 39,000 butterflies, the largest aggregation observed in the last 10 years on the California coast.

This year’s count marks the 20th anniversary of the Western Monarch Thanksgiving Count. Volunteer participation continues to grow and this year over 100 volunteers monitored a record 253 sites, the single greatest effort since the count began. This big uptick in effort is also the result of a major effort in Santa Barbara County being led by WMTC regional coordinators Jessica Griffiths and Charis van der Heide and researchers Prof. Francis Villablanca of Cal Poly and Dan Meade, who are revisiting a similar survey completed by Meade in the 1990s.

The WMTC’s continued success would not be possible without volunteers and hard-working regional coordinators, including Mia Monroe, one of the count’s founders who has been the heart of the project for two decades. Mia has spent countless hours organizing, training and inspiring others. She noted that “Showing up to participate in studies like the Thanksgiving count connects us to a bigger body of conservation work, and lets us know we can make a difference. For me, getting out to count and encouraging others to do the same has been very worthwhile. I take pride in seeing how the count helps with monarch research and advocacy.”

Monarchs from as far away as Idaho, Utah, and Arizona converge to spend the winter in tree groves along the Pacific coast from Mendocino County, California, to northern Baja, Mexico. This gathering of monarchs provides a unique opportunity to gauge the health of the monarch population from the western United States.

This remarkable volunteer effort over the last 20 years has collected invaluable data that has given researchers and conservationists a reliable picture of the western monarch population. What it tells us is that monarch butterfly populations are far from recovered. We will still need a focused effort to address the many threats that monarchs face—from pesticide use and habitat loss to climate change and disease. Volunteers should take pride in knowing that their efforts are integral to western monarch research and conservation. Thank you!