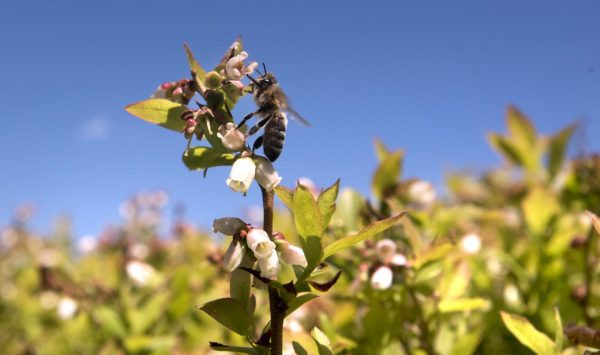 2017 saw US prices for blueberries plummet. A market glut, fuelled in part by competition from high-bush blueberries, drove prices so low that farmers were losing money on their operations. Growers in Hancock and Washington counties left portions or their fields unraked as the price of berries was too low.

Dave Yarborough, the wild blueberry specialist for the University of Maine’s Cooperative Extension, says the prices growers get for Maine’s low-bush, wild blueberries have decreased steadily. In 2012, farmers were getting 76 cents per pound. In 2014, that number was 60 cents. Last year, it was 27 cents. And this has hit wild blueberry pollinators, too, he says. In 2015 growers brought in 77,000 colonies, this year it was down to 27,700, nearly a 40% drop.

There’s been a bit of a turnaround in the market this year after bad weather and reduced operations shrank the yield across the state. Some growers are receiving 35 cents this year. This is the first season in which the industry has had fewer frozen blueberries in storage than the year before. Yarborough says that will probably bring  the pollination count up to about 30,000 colonies.

But that 35-cent figure doesn’t mean the problem is solved. Yarborough said most growers make money on their fields only when the price exceeds 45 cents.