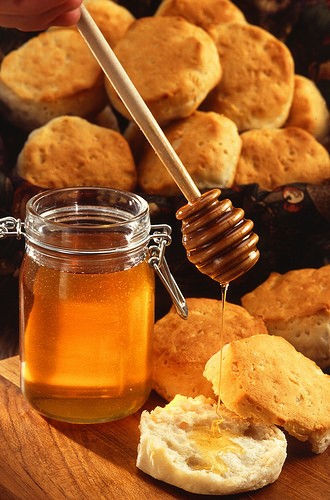 When ARS researchers wrote the definitive report on the composition of honey in 1962, they made it possible to detect whether other substances might have been added, thus allowing consumers to have confidence when the label says “100 percent honey.” (USDA-ARS photo by Scott Bauer).

This post is part of the Science Tuesday feature series on the USDA blog. Check back each week as we showcase stories and news from USDA’s rich science and research portfolio.

When you buy packaged foods at the grocery store, who makes sure what it says on the outside is true on the inside—whether you are reading “100 percent sweet honey” or checking the calories in a serving of nuts?

It never says so on the label, but many times the surety rests on the science of the Agricultural Research Service (ARS).

A team of ARS scientists wrote a report in 1962 that remains the definitive description of the composition and properties of honey. They had to analyze hundreds, if not thousands, of samples of honey from known locations and specific flower sources in order to record the natural variation in chemical composition. Having this reference made it possible to detect and document when honey has been counterfeited or adulterated, which refers to mixing in less expensive, inferior, and sometimes harmful substances.

It’s not easy to identify native U.S. channel catfish fillets from those of other imported fish species, especially basa and tra. Basa and tra are often incorrectly labeled as catfish by wholesalers and retail stores. So ARS developed a fast, simple field test that store buyers can use to distinguish between species, so that their customers can be assured they are putting home-grown—sustainably raised—catfish in their shopping carts.

The discrepancy found by the researchers could be attributed to evolving methods for calculating calories in foods. Calorie levels listed on labels for walnuts and other tree nuts are based on methods developed in the early 1900s.

Scientists in the 1950s grouped walnuts and other tree nuts with other plant-based foods, such as dry beans, legumes and peas, and estimated that each gram of protein or carbohydrate in those foods has an average of 4 calories of energy, while each gram of fat has an average of 9 calories. Baer said the system can work well for estimating calories in mixed diets involving several foods, but not as well for estimating certain individual foods such as tree nuts.

Other possible explanations for the discrepancy are that people don’t thoroughly chew nuts before swallowing them or that it is difficult to fully digest nuts’ cell walls, according to Baer. Either would reduce the bioavailability of energy in the harder nuts like almonds and walnuts.

Honey, catfish and nuts are just three examples of the many ways ARS research helps consumers.