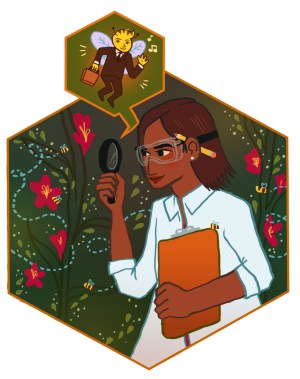 In the lobby of the new building on the University of Minnesota’s St. Paul campus, small, honey-colored hexagons protrude from the standalone centerpiece, which draws your eyes in like an abstract, frozen honey flow. Made in Portugal, it acts as an informal divider between the lobby and the offices; it lets curiosity guide you around its corner. Bee memorabilia lines the shelves in the wall, and West African beehives decorate the visiting space, thankfully lacking bees.

Bee Squad Program Director Dr. Becky Masterman led the tour of the new facility beginning with a brief history of the Bee Lab. The lab goes all the way back to 1913, when it was called “The Division of Bee Culture.” State-funded bonds covered two-thirds of the $6.45 million laboratory built by Alliance. The new facility brings together all the crucial parts for the Bee Lab into one building—a functional honeycomb, so to speak.

She led the tour group outdoors to the pollinator garden. Each part of the garden plays a crucial role for the bees. The trees planted on the edges provide resin for the insects, which is used in the formation of the honeycomb cells. The stone sculpture created by Craig David has the capacity and functionality to be a house for stem-nesting bees. Next on tour were the research labs.

The Bee Lab is composed of two labs–the honey bee and the native, or wild, labs. One of the projects that the honey bee lab is focused on is hygienic behavior and bee breeding. In this study, the long-term goal is to reduce the amount of pesticides and antibiotics used in hives. 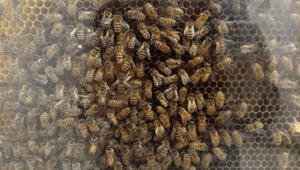 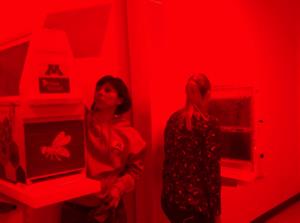 Currently, pesticides are used in many places to control parasitic mite populations, and antibiotics are used to control diseases. Hygienic bees can remove infected bees from a colony before the mites spread to other worker bees. The focus currently for the project is to help beekeepers select for this trait. A project being conducted in the wild bee lab involves restoration ecology. They are studying the colony formation of bees in restored prairie habitats.

Masterman explained the differences between honeybees and native bees. There are 420 species of native bees, and most are solitary. Honeybees, on the other hand, are not native, but are instead, managed. Both types are crucial to the environment—the wild type being efficient pollinators of some native plants, and honeybees, as we all know, are the primary type used for honey production. Minnesota ranks fifth in honey bee production, and in the U.S. overall, there are 2.6 million colonies. Bees are on the decline, endangering crops we depend on such as almonds, avocados, coffee and squash.

Everything in the labs has its place. Systematic and organized, there is space left for free thinking and space for collaboration.

At the back of the building are the bee boxes. Some of the bee boxes house European honey bees. These bees are relatively adapted to the cold through the use of thermoregulating. According to Masterman, the middle of a bee cluster can be as much as 70 degrees Fahrenheit. However, the bees only warm themselves up, not the boxes, “like penguins,” she said.

Masterman and the other researchers showed their zeal for working with bees during the tour. Cathy Shaw, a beekeeper visiting from Rochester, MN, said that her favorite part about beekeeping is “everything. You never know what’s going to happen.”

Dr. Masterman expects that the bee lab will grow collaboratively, and is hoping that since the lab is more integrated into the St. Paul campus, more undergraduates will engage with the lab. Currently, the lab offers one tour a month, but they are planning to increase it to two tours per month. The Bee Lab is “paid for by the people, so we want to give them access,” Masterman said.