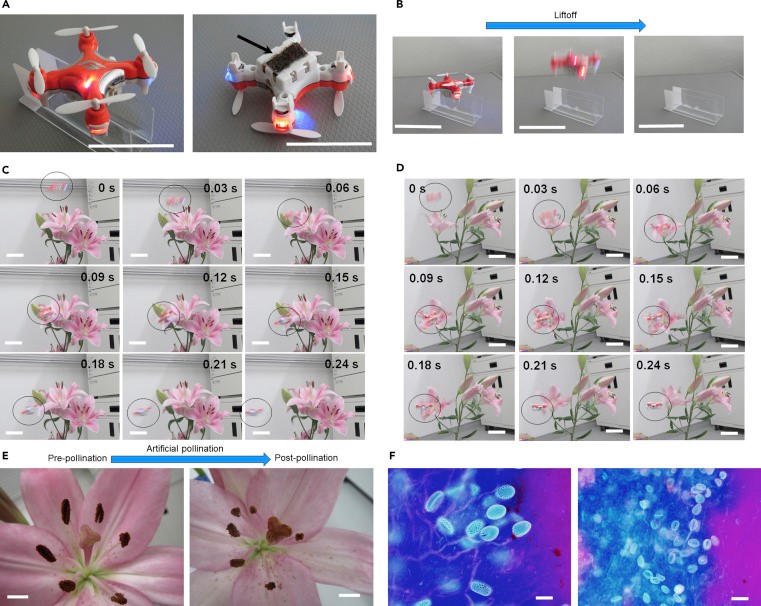 As bees slip onto the endangered species list in the United States, researchers in Japan are pollinating lilies with insect-sized drones. The undersides of these artificial pollinators are coated with horse hairs and an ionic gel just sticky enough to pick up pollen from one flower and deposit it onto another. Far from replacing bees, the drones’ designers are hopeful that their invention could someday help carry the burden that modern agricultural demand has put on colonies and in turn benefit farmers. The work appears February 9 in the journal Chem.

The gel used for the artificial pollinators was the result of an experiment gone wrong. In 2007, senior author Eijiro Miyako, a chemist at the National Institute of Advanced Industrial Science and Technology (AIST) Nanomaterial Research Institute, was working to make liquids that could be used as electrical conductors. One of his attempts generated a gel as sticky as hair wax, which he considered a failure. After a decade of sitting in a storage cabinet in an uncapped bottle, it was rediscovered unchanged during a lab cleanup. Inspired by concerns over honeybees and news reports on robotic insects, Miyako began to explore, by using houseflies and ants, whether the gel could work to pick up pollen.

“This project is the result of serendipity,” says Miyako, who worked with postdoctoral fellow and first author Svetlana Chechetka. “We were surprised that after 8 years, the ionic gel didn’t degrade and was still so viscous. Conventional gels are mainly made of water and can’t be used for a long time, so we decided to use this material for research.”

To determine whether the gel could grasp onto pollen, Miyako collected ants around his institute, put the ionic goop droplet on their bodies, and left them to roam free in a box of tulips. Compared with ants that didn’t have the material applied, the ants with the gel were more likely to have pollen attached to their bodies. In separate experiments using houseflies, the gel was also found to have a camouflage effect–changing color in response to different sources of light–which could help artificial pollinators avoid predation.

Miyako next needed a flying machine that was small enough to maneuver across a field of flowers, like a bee. He settled on a four-propeller drone, about $100 retail value, but simply placing the gel on its smooth, plastic surface wouldn’t be enough for it to effectively pick up pollen. Miyako and Chechetka collaborated with AIST colleagues Masayoshi Tange and Yue Yu on using horse hair to mimic the fuzzy exterior of a bee. The bristles create more surface area for pollen to adhere to and generate electric charge to keep the grains in place.

Miyako’s team flew the remote-controlled drones, with hairs and gel attached, over the flowers of pink-leaved Japanese lilies (Lilium japonicum). The robots absorbed the pollen and then could be flown to a second flower, where the grains were deposited, artificially pollinating the plants and causing them to begin the process of producing seeds. Drones without the gel and hair components did not have this effect.

“The findings, which will have applications for agriculture and robotics, among others, could lead to the development of artificial pollinators and help counter the problems caused by declining honeybee populations,” Miyako says. “We believe that robotic pollinators could be trained to learn pollination paths using global positioning systems and artificial intelligence.”

Although the work is still far from being used in the field, it is a creative first step to addressing a future with fewer bees. The goal would be to decrease the stress put on bee populations by commercialization so that they can do what robots can’t–make honey–while the drones take over the demands of crop pollination.