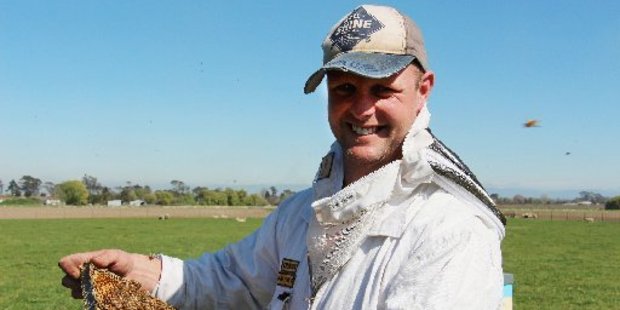 Nearly half a million Arataki honeybees have been stolen from a pine block north of Napier.

Arataki Honey’s John Walsh reported the theft of 19 hives when completing a weekly run to winter-feed the hives.

“We are just shocked that someone has targeted the site and taken the bees,” he said.
“We have been wintering these bees and spent a lot of time feeding and protecting them over the winter months.

He said it must have been a planned operation by somebody with expertise in bees.

“You don’t just take off with a boot-load of bees without having some beekeeping expertise.”

Security is being stepped up but he said it was challenging to monitor remote sites.
“We’re working hard on security and trying to get the hives behind locked gates, but these guys know what they are doing.”

Arataki beekeeper Duncan Johnstone said the theft was discovered on Monday.
He said over his 20 years on the job bee thieving was now the worst he had seen. Last season Arataki had 16 hives stolen off the Napier-Taupo Rd.

Arataki, based in Havelock North, is installing better surveillance systems in remote areas.
“We need to be monitoring these rural areas better. We are concerned that the problem’s becoming more widespread as the honey industry is on the up,” Mr Walsh said.

“I’m really annoyed because we put a lot of work into these hives over the winter, feeding the bees and running Varroa mite protection. It’s really gutting that this hard work has been put to waste.

“The industry used to be a real gentleman’s game and now all of a sudden this ‘underground’ element has crept in. It’s hugely disappointing.”

Mr Johnstone said the thieves sifted through the hives and took only the hives with the biggest populations. The hives are likely to be deployed near manuka, which starts flowering in September.

Manuka honey earns a premium over other varieties because of medicinal properties. New Zealand exports a tenth as much honey as China yet its value is greater – $47 million for June.

“Manuka honey is driving the crime as it is now one of New Zealand’s highest priced exports,” Mr Johnstone said.

“Honey and beehive theft has become a growing issue for New Zealand beekeepers over the last few years, with the total value of these thefts estimated in the millions,” she said.

Apiculture New Zealand and police have been working together to address the issue, including improving intelligence at a national and regional level, as well as educating beekeepers on actions to help keep their honey and hives safe.

Anyone with information related to the theft of honey and bees is encouraged to contact the local police.

Parasite Pressures on Feral Honey Bees. Feral Colonies Are Pathogen Reservoirs. A PlosOne Publication. Feral honey bee populations have been reported to be in…