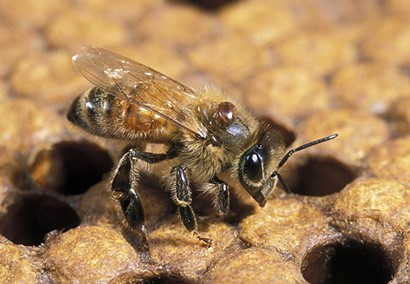 In the search for answers to the complex health problems and colony losses experienced by honey bees in recent years, it may be time for professionals and hobbyists in the beekeeping industry to look in the mirror.

In a research essay published last week in the Journal of Economic Entomology, Robert Owen argues that human activity is a key driver in the spread of pathogens afflicting the European honey bee (Apis mellifera) and recommends a series of collective actions necessary to stem their spread. While some research seeks a “magic bullet” solution to honey bee maladies such as Colony Collapse Disorder, “many of the problems are caused by human action and can only be mitigated by changes in human behavior,” Owen says.

Owen is author of The Australian Beekeeping Handbook, owner of a beekeeping supply company, and a Ph.D. candidate at the Centre of Excellence for Biosecurity Risk Analysis at the University of Melbourne. In his essay in the Journal of Economic Entomology, he outlines an array of human-driven factors that have enabled the spread of honey bee pathogens:

Regular, large-scale, and loosely regulated movement of bee colonies for commercial pollination. (For instance, in February 2016 alone, of the 2.66 million managed bee colonies in the United States, 1.8 million were transported to California for almond crop pollination.).

Carelessness in the application of integrated pest management principles leading to overuse of pesticides and antibiotics, resulting in increased resistance to them among honey bee parasites and pathogens such as the Varroa destructor mite and the American Foul Brood bacterium (Paenibacillus larvae).

Lack of skill or dedication among hobbyist beekeepers to adequately inspect and manage colonies for disease.

Stronger regulation both of global transport of honey bees and bee products and of migratory beekeeping practices within countries for commercial pollination.

Greater adherence to integrated pest management practices among both commercial and hobbyist beekeepers.

Increased education of beekeepers on pathogen management (perhaps requiring such education for registration as a beekeeper).

“The problems facing honeybees today are complex and will not be easy to mitigate,” says Owen. “The role of inappropriate human action in the spread of pathogens and the resulting high numbers of colony losses needs to be brought into the fore of management and policy decisions if we are to reduce colony losses to acceptable levels.”