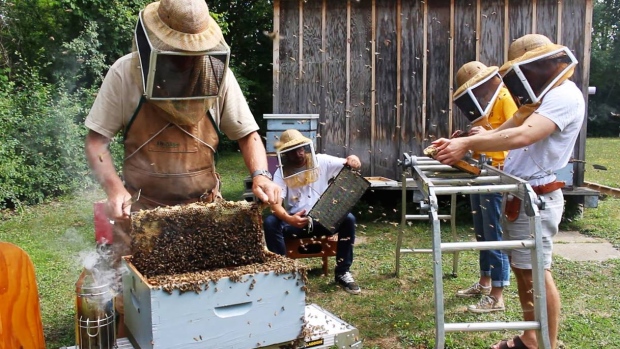 A pot of golden honey could be worth a pretty penny this year after production was down across Ontario in 2017.

The Ontario Beekeepers’ Association confirmed Monday in a press release that almost 57 per cent of Ontario beekeepers who responded to a survey reported production was down by half or more compared to last year.

In fact, the association said “many beekeepers reported honey production 25 per cent or less than what was collected last year.”

“It looked really, really promising first thing in the spring,” he said. “Everything was looking pretty strong – by which I mean lots of bees in the hives.”

Then came May, and with it weeks of cool, wet weather — the kind of weather that bees do not like, according to Kelly.

When bees swarm, the colony that lives in a bee hive divides, and half leaves the hive and sets out to find another place to live. The half of the colony that stays behind is less productive.

The less than ideal weather also meant queen bees were having trouble mating.

Due to the cool, wet weather, flowers produced less nectar, so less raw material for the bees to work with. (University of Guelph Honey Bee Research Centre/Facebook)

According to the Ontario Beekeepers’ Association, the cool, wet weather affected production across the province, but the Niagara and northwest regions were hardest hit.

By the end of the summer, most beekeepers thought they would have no honey at all to sell. But Kelly said the few weeks of warmth in September and early October saved them.

“At that time of year, goldenrod is very abundant,” he said. “There’s just so much of it growing that if we have the right conditions … they can produce a lot of nectar and our bees get a major nectar flow, which they can convert into honey.”

Still, one third of commercial beekeepers who responded to the OBA survey said they were very concerned about their business.

However, the association said very few beekeepers had an appetite for agricultural support programs, which they consider to be “too expensive, too difficult to apply [for] and too complicated.”