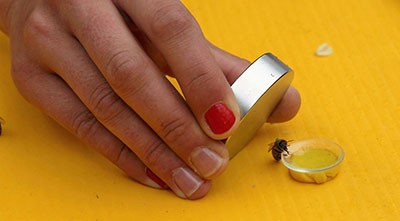 Honey bees appear to sense magnetic fields using a magnetic structure in their abdomens, according to a team of physicists and biologists in Canada. The researchers came to this conclusion by carrying out a series of physics and behavioural experiments on the insects, which showed that this sensory ability can be disrupted using a strong permanent magnet.

Bees are not the only animals that seem to navigate using magnetic fields, with some rodents, birds, fishes, reptiles, bacteria and insects appearing to have this ability too. What is not well understood, however, are the underlying mechanisms of “magnetoreception” that make this navigation possible.

One clue could lie in the fact that some of these organisms contain magnetite – a ferromagnetic oxide of iron that is also found in some types of rock. Indeed in 1997, Joe Kirschvink and colleagues at the California Institute of Technology showed that honey bees respond to local magnetic fields in a way that is consistent with magnetite-based magnetoreception.

What Veronika Lambinet, Michael Hayden, Gerhard Gries and colleagues at Simon Fraser University in Vancouver have now done is to show that a ferromagnetic material consistent with magnetite exists in the abdomen of honey bees. They found that the material can be magnetized using a strong permanent magnet and that magnetizing the abdomen of a live honey bee disrupts its ability to navigate using local magnetic fields.

The researchers first dissected a number of honey bees, separating the bodies into abdomens, thoraxes and heads before crushing the body parts into pellets representing the three sections of bee anatomy. They then used a superconducting quantum interference device (SQUID) to measure the magnetization of each pellet as it was exposed to an applied magnetic field of varying strength and direction. The resulting plots of magnetization versus applied field showed no evidence for ferromagnetism in pellets made from thoraces and heads – but a clear hysteresis loop indicative of ferromagnetism for the abdomen sample.

To see how this magnetization affected the ability of live bees to navigate to a food source, the team first trained a group of bees to locate a sugar reward in an environment where electrical coils create a magnetic field. Half of these trained bees were then magnetized and their performance was compared with an un-magnetized control group. The team found that the magnetized bees were unable to find the reward, suggesting that their magnetoreceptors had been disrupted by the magnetization process.

While the study does not provide direct information about the biological mechanisms involved in magnetoreception, Hayden says: “The fact that we were able to disrupt the magnetic sense may well help to open doors or provide traction for future lines of inquiry.”

Hayden adds that the team hopes “to eventually address questions such as the potential impact of industrial electromagnetic noise on the bees’ magnetoreceptor and their overall well-being”.

He also believes that future experiments could aim at investigating the microstructure of the magnetoreceptor. “Indeed, bees could become the model organism for studying magnetoreception,” Hayden adds.

The study is described in Royal Society Proceedings B.