Temperatures in Central Valley have been well above average; that means blooms along the Fresno County Blossom Trail are well ahead of schedule. Everywhere in Fresno county you can start to see blossoms in the orchards; in another week or so many of these trees will be in full bloom.

Apricots, oranges, and peaches are just a few of the valley’s signature crops that start out in this beautiful and delicate way. People from all over the world come to see the blossoms.

But due to the unseasonably warm start to February, the timing of this bloom is multiple week’s ahead of schedule, reported yourcentralvalley.com. On the surface this may not seem like a problem, but Stacie Grote with Simonian Farms says some growers are concerned: “If we were to get a frost in the next few weeks it could devastate the cherry crop.”

Cold temperatures are important during the winter so plants can go dormant, but when an orchard in full bloom is exposed to the cold, it could be an entirely different story. “There is still so much time for the weather to change; storms, frost. It’s not unheard of to have a frost in March. That’s making the farmers a little nervous,” said Grote.

If you have anything at all to do with almond pollination, or simply want to watch and learn about the greatest pollination event in the Universe, tune into the web page below, published by Blue Diamond on a regular basis during the almond season. Mel Machado does a weekly overview of bloom stage and anything else of interest or “need to know” for bees, beekeepers and growers for the entire valley, from north to south, on a weekly basis. It is without doubt the best source of what’s happening available. 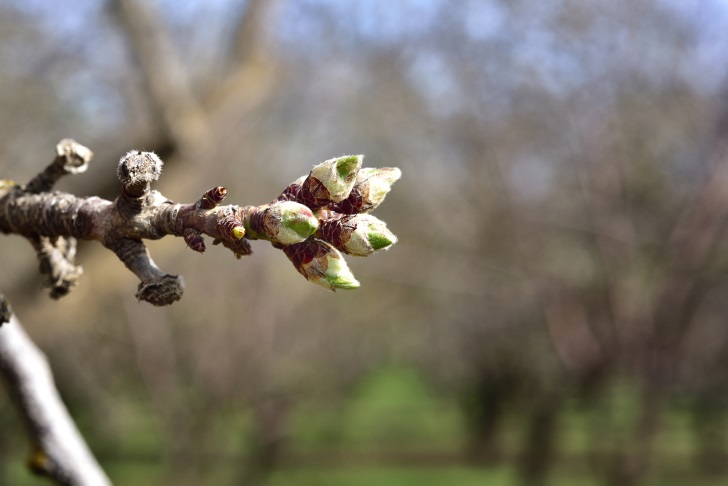 Dry conditions have dominated the fall and winter of 2018. Rainfall totals have been running well behind seasonal norms and the wet winter experienced last year. This has presented several difficulties for growers in all areas of the Central Valley. Winter sanitation, the removal and destruction of mummy nuts remaining in the trees after harvest has been particularly hindered by the lack of rainfall. Following the significant losses caused by Navel Orange Worm, NOW, in the 2017 crop, growers have been focused on removing and destroying this prime NOW over-wintering site. However, moisture from rain and fog is required to improve mummy removal and growers have struggled to adequately clean their orchards. 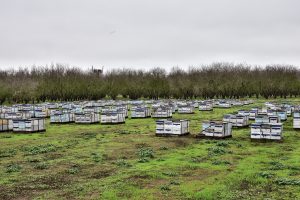 Hives waiting to be moved into orchards – Stanislaus County

Many growers with water available also started irrigating their orchard during December in order to maintain adequate soil moisture levels. While rain in recent weeks has helped, rainfall totals and more importantly, snow pack levels in the Sierra Nevada watershed are far below seasonal norms. Fortunately, storage levels in the state’s reservoirs are in good shape. Growers are hopeful that releases from the reservoir system will provide adequate water for irrigation during the 2018 growing season.

Beekeepers have been moving hives into the orchards for several weeks and will continue to do so until the start of the bloom. One point of concern is the lack of native forage available to support the bees until the start of the bloom. The lack of rain has translated into a lack of weeds in and around the orchards. Flowers from these weed species, including Chickweed and Sheperdspurse normally provide a source of nourishment during the pre-bloom period. However, this year, the lack of early rain means that weeds have germinated later than usual and there is currently very little for bees to forage on prior to the bloom.

Currently, advance examples of the early-blooming Sonora are moving rapidly into the green tip and pink tip stages, driven by the above normal temperatures that have reached into the lower 70’s. As may be seen in the accompanying photo, advanced examples of the early-bloom Sonora are now presenting a few “rogue” flowers. As this report was being prepared Nonpareil and the various California type varieties are also following closely, moving swiftly into the green tip stage.

We are anticipating beginning regular bloom reports on or around Friday, February 9, 2018. 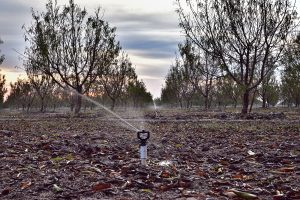 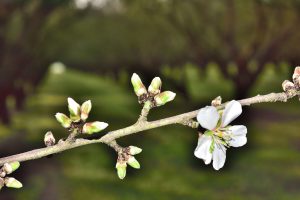 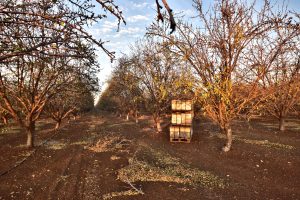 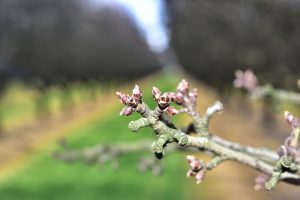