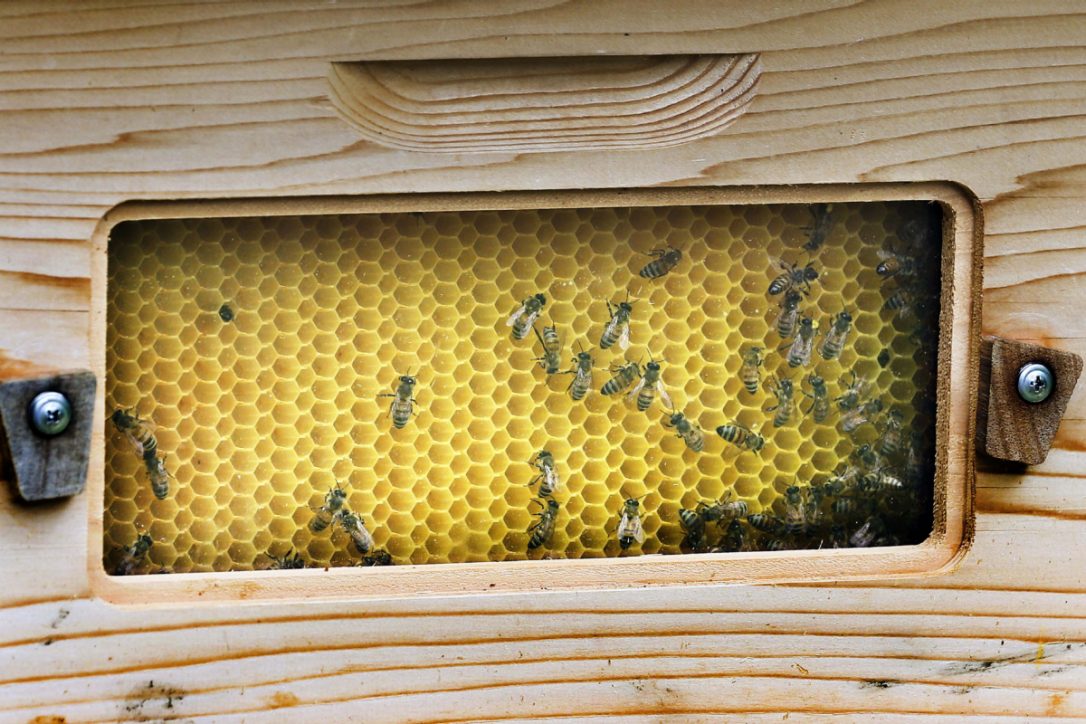 A method that’s supposed to make beekeeping simpler for novices by providing honey on tap has drawn criticism from some experts, who say it may encourage casual beekeepers to set up an apiary but not put in the hard work needed to maintain it.

The product is renowned for skipping many steps in the usually multifaceted honey extraction process with the simple turn of a lever.

In a traditional hive, beekeepers have to sedate the bees, remove the wooden frames from the hive, “decap” the honey from the frames, process it in a centrifuge, and then filter it.

In the FlowHive, the bees do their work inside the hive, and a few cranks of a lever split the comb, allowing pure, ready-to-eat honey to travel through tubes and into a bottle.

Instead of taking several hours, the FlowHive can extract its honey in about 15 minutes in the ideal warm and dry conditions, said Ian Baird, owner of Terre Bleu, a lavender farm in Milton that also produces honey.

Bees at work in the FlowHive at Terre Bleu Lavender Farm in Milton.

“Buying stainless centrifuges and mechanical devices to harvest and extract and clean honey (in the traditional method) certainly is not economical when you’ve only got a couple of hives,” he said.

Amid concern for a decreasing honey bee population in recent years, more people are pitching in part-time to keep the honey flowing. One in every three bites of food we eat also relies on bees for pollination, experts say.

But some beekeepers are concerned that adopting the FlowHive for small-scale beekeeping could do more harm than good for bees.

“Many people have gotten into beekeeping because of the FlowHive, but don’t know how to bee keep,” said Peter Chorabik, a Toronto beekeeper who runs over 250 hives.

The FlowHive, said Chorabik, can make new beekeepers think that the process is much less involved that it actually is, which puts the bees at risk of being attacked by pests and contracting diseases.

“You have to be responsible and know. . . what you’re signing up for when you get your own bees,” Chorabik said. “If you’re a farmer of cattle, and your cattle were sick and they all died in the winter, that wouldn’t be acceptable. But when you have honey bees and they all die in the winter because you can’t take care of them properly, it’s accepted.”

Shawn Caza, a long-time Toronto beekeeper, said he knew of aspiring beekeepers who bought a FlowHive and bees, but “planned a vacation during the time of the year when one would normally start a new colony.”

“The honey harvest is really the tip of the iceberg in terms of what a beekeeper needs to do maintain healthy hives,” Caza said.

Stuart Anderson, the co-creator of the FlowHive, said his company educates new beekeepers.

“We provide material on colony health and pests and diseases on our website and lots of educational videos and other content,” Anderson said in an email statement. “We actively encourage aspiring beekeepers to join a bee club and/or to connect with a mentor beekeeper.

“Our stand is that beekeepers are responsible for the health of their bees and this requires knowledge, skill and care. . .(I) am very proud that the invention of the FlowHive has brought tens of thousands more people into beekeeping.”

For all the speed and utility the FlowHive has to offer, professional beekeepers also have critiques of the product.

One concern is that the FlowHive produces a lower yield than a traditional hive, a pattern that Baird has noticed in his operation. Baird will stick with the traditional hives for the bulk of his honey-producing operation.

Sometimes, getting the honey from a FlowHive can be an issue, according to Caza.

“Others had the honey spill out of the comb within the hive and subsequently leak out the bottom,” he said. “I also heard from people with the opposite problem, the honey came out through the intended path, but was extremely slow.”

Fred Davis, a Toronto-based beekeeper, said a really hot summer is needed for the honey to flow well.

“Last year, it was scorching hot, which helped,” he said.

Davis also believes that bees do not like the plastic frames used in the FlowHive as much as the wood frames in traditional hives.

For all his criticisms, Davis said the FlowHive has no effect on the honey’s flavour.

“The taste is the same, honey is honey,” he said.

Anderson stands by his product, saying that the FlowHive has been tested in Canada and it’s been found to work successfully in colder climates.

“People in every region of the U.S.A. are harvesting successfully with the FlowHive,” he said.

The beekeepers the Star talked to may disagree with Anderson, but they do see the FlowHive as a useful educational tool.

“Our farm is an agritourism ecotourism farm and we thought it would be also very educational to show the public,” Baird said.