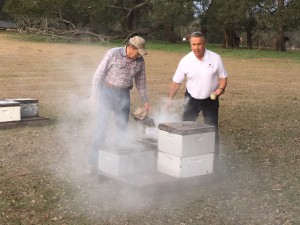 Bee keepers across Florida and the nation are wondering what the future holds.

That’s because bees are dying by the millions and that could spell higher food prices at the store.

“Honey bee population in Florida is really in a crisis,” said Dave Hackenberg.

He rents his bee hives to farmers so bees can pollinate crops.

But for the last 10 years, the bee population has dwindled, and Hurricane Irma didn’t help.

“Irma probably took out 75, according to state’s numbers, took out 75 to 80 thousand hives of bees just from flooding and wind and damage and so on,” said Hackenberg.

“If you don’t think that bees matter, watch when a pint of blueberries goes to six bucks,” said Lee Rosen, CEO of Healthy Bees, a Miami Beach company that makes a supplement for sick bees.

Rosen believes the product, called BeesVita, could save the bee population.

Bees eat it and, according to Rosen, become stronger.

“The high winds and the flooding kill the food so the bees leave the hive, go out to look for food, and there is no food,” he said.

While most people think of bees for their honey, Hackenberg said that’s a sideline business for him.

“One out of every three bites of food that you put in your mouth is put there by the honey bees. The fruits, the vegetables, the nuts, and a lot of things, all those things that need pollinated, the blueberries, apples,” said Hackenberg.

Hackenberg said the solution to the declining bee population is additional research to find out what is killing them off, and how to stop it.

The food supply depends on it.