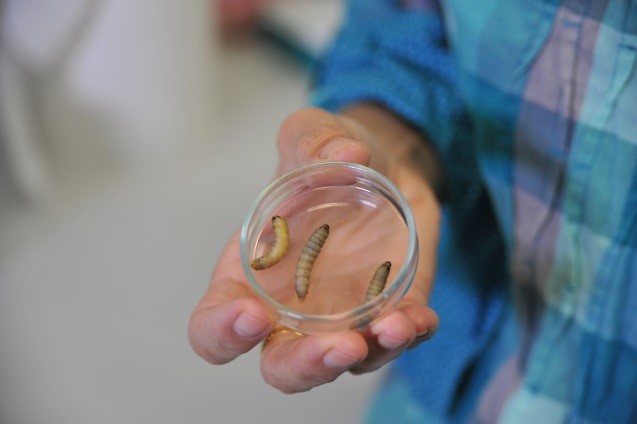 A beekeeper’s accidental discovery of a plastic-eating caterpillar in her hives may offer the solution to the shopping bag pollution now clogging landfill sites around the world.

The discovery that the caterpillar commercially bred for fishing bait eats polyethylene, one of the toughest and most used plastics, was made by Spanish researcher Federica Bertocchini, an amateur beekeeper.

She was removing parasitic pest wax worms – the larvae of the common insect Galleria mellonella or greater wax moth – from the honeycombs in her hives.

The worms were temporarily kept in a typical plastic shopping bag that quickly became riddled with holes.

The wax worm is a scourge of beehives across Europe. In the wild, the worms live as parasites in bee colonies. Wax moths lay their eggs inside hives where the worms hatch and grow on beeswax and other colony components – hence the name.

Bertocchini, from the Institute of Biomedicine and Biotechnology of Cantabria (CSIC) in Spain, worked with colleagues Paolo Bombelli and Christopher Howe at the University of Cambridge’s Department of Biochemistry to conduct a timed experiment.

About 100 wax worms were exposed to a plastic bag from a UK supermarket. Holes started to appear after just 40 minutes, and after 12 hours there was a reduction in plastic mass of 92 milligrams from the bag.

The team says this degradation rate is extremely fast compared to other recent discoveries, such as bacteria reported last year to biodegrade some plastics at a rate of 0.13 milligrams a day.

“If a single enzyme is responsible for this chemical process, its reproduction on a large scale using biotechnological methods should be achievable,” says first author Paolo Bombelli of Cambridge in a study published in the journal Current Biology.

“This discovery could be an important tool for helping get rid of the polyethylene plastic waste accumulated in landfill sites and oceans.”

Polyethylene accounts for 40% of total demand for plastic products across Europe – where up to 38% of plastic is discarded in landfills. People around the world use around a trillion plastic bags every single year.

Plastic is highly resistant to breaking down, and even when it does the smaller pieces choke up ecosystems without degrading.

The researchers say the beeswax on which wax worms grow is composed of a highly diverse mixture of lipid compounds: building block molecules of living cells, including fats, oils and some hormones.

While the molecular detail of wax biodegradation requires further investigation, the researchers say it is likely that digesting beeswax and polyethylene involves breaking similar types of chemical bonds.

“Wax is a polymer, a sort of ‘natural plastic,’ and has a chemical structure not dissimilar to polyethylene,” says CSIC’s Bertocchini, the study’s lead author.

The researchers conducted spectroscopic analysis to show the chemical bonds in the plastic were breaking. The analysis showed the worms transformed the polyethylene into ethylene glycol, representing unbonded monomer molecules.

To confirm it wasn’t just the chewing mechanism of the caterpillars degrading the plastic, the team mashed up some of the worms and smeared them on polyethylene bags, with similar results.

“The caterpillars are not just eating the plastic without modifying its chemical make-up,” Bombelli says. “We showed that the polymer chains in polyethylene plastic are actually broken by the wax worms.

“The caterpillar produces something that breaks the chemical bond, perhaps in its salivary glands or a symbiotic bacteria in its gut. The next steps for us will be to try and identify the molecular processes in this reaction and see if we can isolate the enzyme responsible.”

Once the molecular details of the process are found, the researchers say it could be used to devise a biotechnological solution on an industrial scale for managing polyethylene waste.

“We are planning to implement this finding into a viable way to get rid of plastic waste, working towards a solution to save our oceans, rivers, and all the environment from the unavoidable consequences of plastic accumulation,” Bertocchini says.