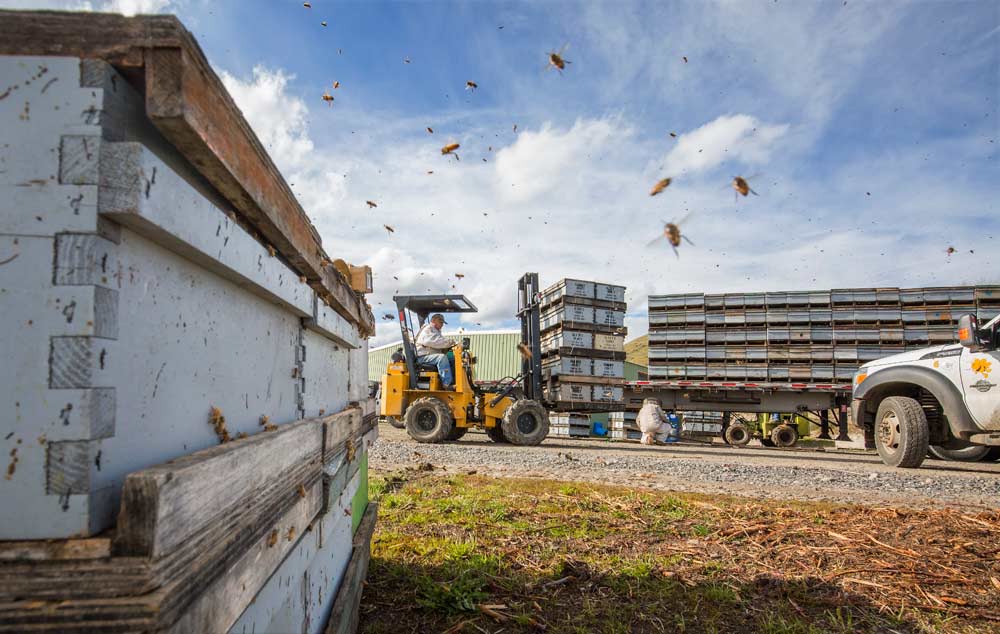 Beekeepers had joined a group of livestock producers in asking for more time to comply with new laws that require all trucks to use electronic logging devices, or ELDs.

ELDs are hardwired to commercial trucks to keep track of driving time, limited by federal safety laws. By Dec. 18 this year, they will become mandatory for all other drivers, replacing paper logs kept honor-code style by the drivers themselves.

The new law would not change existing hours-of service rules, which limit truckers to 11 hours of driving following a 10-hour rest with a host of exemptions for agricultural drivers.

Beekeepers and other livestock owners fear the devices could arbitrarily force a driver to stop driving in the middle of a hot day, putting the animals they carry at a health risk. Beekeepers already struggle to find enough drivers to haul bees from California orchards in the Northwest and Midwest in time for bloom.

The groups had petitioned Congress for a year-long exemption through federal budget funding clauses. On Nov. 20, the U.S. Department of Transportation, responding to those concerns, granted the 90-day waiver for all agricultural hauling to evaluate exemption requests and provide guidance on existing exemptions to hours-of-service. Concerned about the health of their already embattled honeybee colonies, the nation’s beekeepers have joined with livestock producers in asking the U.S. Congress for a year’s reprieve from regulations mandating the use of electronic logging devices on trucks.

The new federal requirements are scheduled to take effect Dec. 18.

However, beekeepers fear the devices would force drivers to stop their trucks during warm periods of the day, putting the bees at risk. The breeze created by the moving trucks makes bees want to stay safe inside their hives during transport.

The industry already sometimes has trouble finding drivers willing to haul loads of bee colonies from California to fruit orchards in the Northwest, Midwest and Northeast.

Loads have been known to wait for a driver in California almond orchards for a week to 10 days, said Gene Brandi, a Los Banos, California, beekeeper and president of the American Beekeeping Federation. “We certainly hope it doesn’t get worse but it may.”

“There are some two-person driver teams (including husband-wife teams), but some trucking outfits say they will no longer haul bees after (the change in rules),” said Joe Traynor, a Bakersfield, California, bee broker who sends hives to pollinate blueberry plots in Maine each year. “Others will likely raise their rates significantly.”

The federation has joined pork, cattle and fish production organizations in asking the U.S. Congress to give them a year-long exemption from the ELD rule to make sure the devices allow the haulers enough flexibility to make sure their live animals stay alive during the haul.

“We’re not pushing an exemption from the regulation, we’re just trying to get our folks a little more time to use it properly,” said Fran Boyd, a Washington D.C. lobbyist hired by the groups. The American Trucking Association supports the ELD mandate, but also supports granting the one-year waiver for the live animal haulers.

The groups are waiting on Congress to pass a 2017-2018 federal budget. The House of Representatives has agreed to the extension in its version, the Senate had not yet decided as of press time.

The ELD requirement changes nothing about how long drivers can be on the road, only the method of tracking those hours, said Duane DeBruyne of the Federal Motor Carrier Safety Administration.

The transportation safety board estimates the ELDs will prevent 26 fatal crashes and 562 injuries per year, most of them to people riding in passenger vehicles, DeBruyne said.

Current rules limit the drivers to 11 hours following a minimum 10-hour rest but grant agricultural haulers a host of exemptions. The livestock groups worry the ELDs will trigger infractions automatically with no regard to those exemptions and have asked for the extra year to sort that out.

“There’s going to be a lot of violations on those electronic logs because guys can’t do it,” said Dwight Price of Price Trucking in Yakima, Washington, which transports between 80 to 100 loads between Washington and California each year. If drivers stop in hot weather because their ELD tells them to, they’re going to end up with “$100,000 worth of dead bees,” he said.

Bees will try to come out of their hive in any weather over 75 degrees, said Eric Olson, a Yakima orchardist and retired longtime beekeeper. Weather in March and April, when they make the trip from California for pollination, often gets that hot.