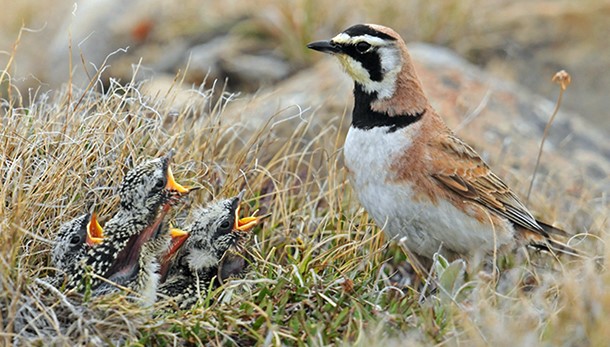 Photo: Horned Lark, one of hundreds of bird species affected by use of chlorpyrifos. (Photo by Middleton Evans)

From The New York Times

Scott Pruitt, the head of the Environmental Protection Agency, moved late on Wednesday, March 29, to reject the scientific conclusion of the agency’s own chemical safety experts who under the Obama administration recommended that one of the nation’s most widely used insecticides be permanently banned at farms nationwide because of the harm it potentially causes children and farm workers.

The ruling by Mr. Pruitt, in one of his first formal actions as the nation’s top environmental official, rejected a petition filed a decade ago by two environmental groups that had asked that the agency ban all uses of chlorpyrifos. The chemical was banned in 2000 for use in most household settings, but still today is used at about 40,000 farms on about 50 different types of crops, ranging from almonds to apples.

Late last year, and based in part on research conducted at Columbia University, E.P.A. scientists concluded that exposure to the chemical that has been in use since 1965 was potentially causing significant health consequences. They included learning and memory declines, particularly among farm workers and young children who may be exposed through drinking water and other sources.

But Dow Chemical, which makes the product, along with farm groups that use it, had argued that the science demonstrating that chlorpyrifos caused such harm is inconclusive — especially when properly used to kill crop-spoiling insects.

An E.P.A. scientific review panel made up of academic experts last July also had raised questions about some of the conclusions the chemical safety staff had reached. That led the staff to revise the way it had justified its findings of harm, although the agency employees as of late last year still concluded that the chemical should be banned. Mr. Pruitt said the agency needed to study the science more.

“We need to provide regulatory certainty to the thousands of American farms that rely on chlorpyrifos, while still protecting human health and the environment,” Mr. Pruitt said in his statement. “By reversing the previous administration’s steps to ban one of the most widely used pesticides in the world, we are returning to using sound science in decision-making — rather than predetermined results.”

“It means that this important pest management tool will remain available to growers, helping to ensure an abundant and affordable food supply for this nation,” Sheryl Kunickis, director of the U.S.D.A. Office of Pest Management Policy, said in a statement Wednesday.

Dow Agrosciences, the division that sells the product, also praised the ruling, calling it in a statement “the right decision for farmers who, in about 100 countries, rely on the effectiveness of chlorpyrifos to protect more than 50 crops.”

But Jim Jones, who ran the chemical safety unit at the E.P.A. for five years, and spent more than 20 years working there until he left the agency in January when President Trump took office, said he was disappointed by Mr. Pruitt’s action.

“They are ignoring the science that is pretty solid,” Mr. Jones said, adding that he believed the ruling would put farm workers and exposed children at unnecessary risk.

The ruling is, in some ways, more consequential than the higher profile move by Mr. Trump on Tuesday to order the start of rolling back Obama administration rules related to coal-burning power plants and climate change.

In rejecting the pesticide ban, Mr. Pruitt took what is known as a “final agency action” on the question of the safety and use of chlorpyrifos, suggesting that the matter would not likely be revisited until 2022, the next time the E.P.A. is formally required to re-evaluate the safety of the pesticide.

Mr. Pruitt’s move was immediately condemned by environmental groups, which said it showed that the Trump administration cared more about catering to the demands of major corporate players, like Dow Chemical, than the health and safety of families nationwide.

“We have a law that requires the E.P.A. to ban pesticides that it cannot determine are safe, and the E.P.A. has repeatedly said this pesticide is not safe,” said Patti Goldman, managing attorney at Earthjustice, a San Francisco-based environmental group that serves as the legal team for the Natural Resources Defense Council and the Pesticide Action Network of North America, which filed the petition in 2007 to ban the product.

The agency had been under court order to issue a ruling on the petition by Friday. The environmental groups intend to return to the Ninth Circuit Court of Appeals in San Francisco to ask judges to order the agency to “take action to protect children from this pesticide” Ms. Goldman said on Wednesday.

As a result, the American Bird Conservancy issued a statement:

Chlorpyrifos, one of the most-used pesticides in the United States, has been killing birds and poisoning the environment for the past half-century. Because of those risks to wildlife and to human health, ABC has been calling for a ban on the use of chlorpyrifos for years. Environmental Protection Agency scientists agreed and were on course to ban the pesticide this month.

But late yesterday, EPA chief Scott Pruitt rejected the conclusion of the agency’s own pesticide experts, who had recommended that EPA forbid use of the pesticide permanently at farms nationwide. Rebuffing a petition filed by environmental groups a decade ago, Mr. Pruitt took “final agency action,” which may not be revisited until 2022.

Studies show that women and children are particularly at risk from exposure to chlorpyrifos. ABC is also very concerned about the documented threat chlorpyrifos poses to birds, especially to endangered species.

This past summer, EPA’s draft biological evaluation on threatened and endangered species found that chlorpyrifos is “likely to adversely affect” 97 percent of all wildlife, including more than 100 listed bird species.