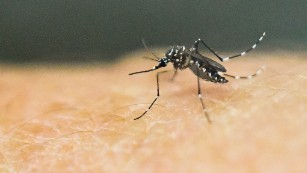 After the first locally transmitted cases of the Zika virus were identified in a small area north of downtown Miami, officials began to spray an insecticide over a 10-square-mile portion of Miami-Dade County on Thursday morning. But what was in the insecticide, and how does it work?

The main ingredient of the insecticide, Dibrom, is the chemical Naled. It works by killing mosquitoes on contact. Sprayers produce very fine droplets that are small enough to stay airborne and intercept mosquitoes in flight.

Naled does not pose a health risk to either people or pets when sprayed in low concentrations, according to both the Environmental Protection Agency (PDF) and the Centers for Disease Control and Prevention.

The Mosquito Control Section has applied Naled via an ultra-low-volume spray for many years, officials said in a news release. In fact, Dibrom has been used in the United States over the past 50 years, said Timothy J. Donnelly, vice president, chief administrative officer and general counsel of AMVAC Chemical Corp., which makes the insecticide.

“It is regularly sprayed in 12 states on over 15 million acres each year,” Donnelly said.

Since the variety of mosquito that carries Zika is most active predawn and at sunset, all spraying must take place at those times. Special precautions are not necessary, Miami-Dade County officials advised, though people with allergies may want to remain indoors. During any insecticide operation, it is recommended that beekeepers cover their bees.

Thursday’s spraying, which lasted about an hour, was recommended by the CDC and Florida’s Department of Health to reduce the population of adult mosquitoes, some of which may be capable of spreading viruses, including Zika. Originally scheduled for Wednesday, the aerial spraying operation was delayed because of poor weather conditions.

“When Naled gets sprayed, it knocks out the mosquitoes, but if sprayed over water, it breaks down quickly,” said Bryn Phillips, a specialist in the University of California, Davis environmental toxicology department.

His research indicates that the insecticide breaks down into different chemical versions of Naled. One of these versions, dichlorvos, is quite toxic to aquatic species at the “low end of the food chain,” like aquatic insects and frog larvae — “basically fish food,” Phillips said.

If the chemicals are rotated and managed properly, an environmental area can recover, Phillips noted.

Naled spray droplets stay airborne for an extended period, and the chemical begins to break down once exposed to sunlight or water. Very little of the low-concentration spray settles on the ground. Those who worry that they may have come into contact with the chemicals should wash, county officials advised; any food that may have been exposed should be rinsed before eating. Since concentrations are far below what is harmful to humans, symptoms, such as skin irritation or headache, are unlikely.

Zika was discovered in 1947 in Uganda. An outbreak that began in Brazil in 2015 has spread throughout the Americas. Florida reported the nation’s first local transmission of Zika from an infected mosquito in late July.

Zika has been shown to be responsible for an alarming increase in microcephaly, in which babies are born with small brains and heads, as well as other hearing, vision and developmental disorders.

Although spraying insecticides raises concerns about toxicity to aquatic life, policy-makers must weigh the potential costs to human health by not spraying and costs to environmental health by spraying, Phillips said.

“You talk to the mosquito spraying guys, and they’re all about human health, and they’re OK with some impacts to the environment,” he said. Yet some environmentalists are not OK with any effects to land and sea, he said.