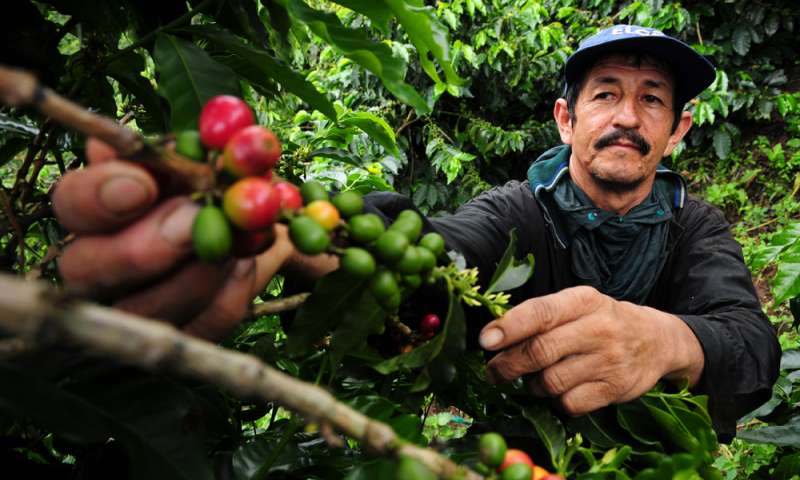 That’s a key takeaway of the first major study of climate change’s projected impacts on coffee, and the bees that help coffee to grow. The findings appear in Proceedings of the National Academy of Sciences (PNAS).

“Coffee is one of the most valuable commodities on earth, and needs a suitable climate and pollinating bees to produce well,” says Taylor Ricketts, director of the University of Vermont’s (UVM) Gund Institute for Environment and study co-author. “This is the first study to show how both will likely change under global warming – in ways that will hit coffee producers hard.”

While other research has explored climate-coffee scenarios, no other study has explored the coupled effects of climate change on coffee and bees at the national or continental scale. The study forecasts much greater losses of coffee regions than previous global assessments, with the largest declines projected in Nicaragua, Honduras and Venezuela.

“Coffee provides the main income for millions of the rural poor, so yield declines would affect the livelihoods of those already vulnerable people,” says Ricketts, who is also a professor in UVM’s Rubenstein School of Environment and Natural Resources.

A new study finds that global warming could reduce coffee growing areas in Latin America — the world’s largest coffee-producing region — by as much as 88 percent by 2050. Credit: Neil Palmer (CIAT).

The study also identified future coffee regions where the number and diversity of bees are likely to increase. This could boost coffee productivity regionally, offsetting some negative climate impacts, the researchers say.

“If there are bees in the coffee plots, they are very efficient and very good at pollinating, so productivity increases and also berry weight,” says lead author Pablo Imbach of the International Center for Tropical Agriculture (CIAT). “In the areas projected to lose coffee suitability, we wanted to know whether that loss could be offset by bees.”

The study highlights the importance of tropical forests, which are key habitats for wild bees and other pollinators. While 91 percent of the most suitable area for coffee in Latin America is currently within a mile of tropical forests, that is projected to increase to 97 percent by 2050, meaning conservation of those habitats will be crucial.

“We hope the models we have created to make these projections can help to target appropriate management practices such as forest conservation, shade adjustment and crop rotation,” says Lee Hannah, senior scientist at Conservation International and a co-author of the study.