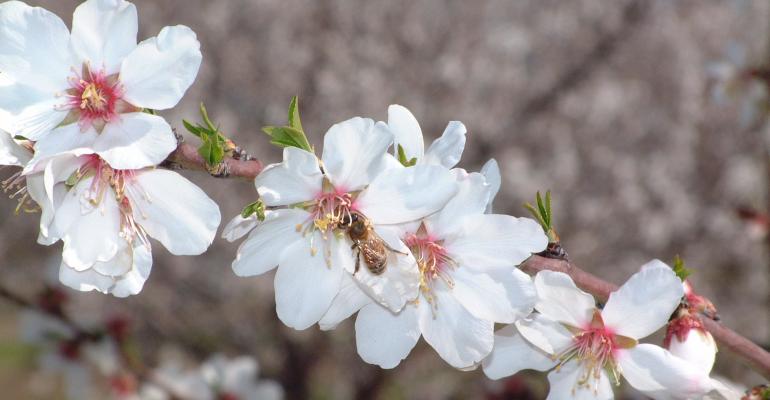 As California’s producing almond acreage continues to grow, so does the demand for pollination services. USDA Pollination Survey figures suggest 1.9 million honey bee colonies — about three-quarters of the nation’s colonies — will be needed for almond pollination this year.

American Beekeeping Federation President Gene Brandi, who is also a longtime Central Valley beekeeper, says he is hearing that bee supplies could be short, or that hive strength could be compromised. Hives from out of state providers have been arriving in California in recent weeks, and are already being moved into orchards as weather allows.

California beekeepers are reporting at least a 20 percent loss of hives, Brandi says, with some reporting losses as high as 50 percent. Consensus, he says, is that there is no single cause for the losses, but rather a combination of mite infestations and pesticides.

Bee broker Joe Traynor, in Kern County, says there is a lot of uncertainty about the coming pollination season. He cites major bee losses over the past year, up to and including this January. In addition, two of his major suppliers cancelled out last month on over 2,000 colonies, and he says, other bee suppliers have reduced their hive commitments.

Traynor and Brandi cite a number of reasons for the strong hive shortage. Natural disasters in other parts of the nation have affected colony numbers. Although California did have better forage supplies for bees last summer, wildfires during the fall reduced foraging.

Traynor says the consensus among beekeepers and researchers is that the parasitic varroa mite, and the viruses it spreads, are primary contributors to bee losses. The mites are also developing resistance to control chemicals.

With pollination season fast approaching, almond growers should already have pollination contracts in place, Brandi says. Those who don’t could come up short this year. It could also be a challenge for beekeepers to fulfill high frame count contracts due to winter losses.

There were 1 million producing acres of almonds in California last year, according to the USDA. The agency’s Cost of Pollination Survey shows that 1.7 million colonies were used for almond pollination in 2016, at an average of 1.9 colonies per acre.

Self-fertile varieties of almonds, which represent less than 3 percent of total acreage, are not expected to impact hive demand, as at least one colony per acre is recommended to achieve desired yields.

According to the Almond Board of California’s 2017 Sustainability Report, the number of U.S. honey bee hives is at a 20-year high. The report also notes that beekeepers still experience significant in-season losses and work hard to maintain healthy apiaries.

Bees are still moving into California for the pollination season, many from indoor overwintering sites, says Bob Curtis, director of agricultural affairs for Almond Board of California.

Curtis, who administers the board’s production research program, says the industry is aware of the damage many southeastern beekeepers sustained last year during two major hurricanes. In California, beekeepers lost hives and bee forage due to wildfires.

In the last few years, even as almond acreage has increased, there has been a sufficient supply of bees for pollination, Curtis says. In spite of health issues with apiaries, beekeepers have stepped up to supply enough hives for pollination.

“We’re cautious with the increase in acreage and bee health issues,” Curtis says, “but we have always had sufficient bees to produce record crops.”