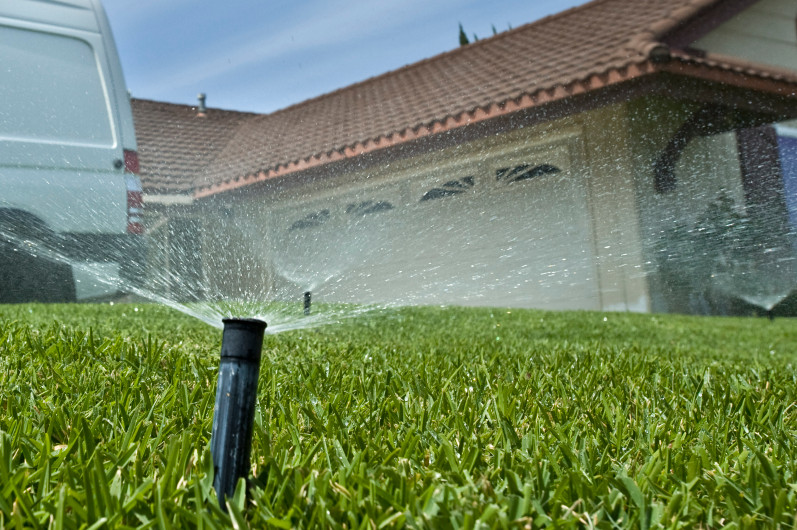 Sprinklers spray water on lawn of an east Anaheim home during mid-day on April 3, 2015. New water-wasting restrictions could become permanent in the state. (Photo by Joshua Sudock)

Anyone caught wasting water in California may be fined as much as $500 under new rules being considered by the state water board, officials said Monday.

The State Water Resources Control Board is expected to adopt regulation coming before the board on Feb. 20 that would make it a crime to commit any of seven wasteful water practices — from lawn over watering to street median irrigation. Those rules would take effect April 1.

“These are permanent prohibitions on wasteful water uses,” said Max Gomberg, a climate and conservation manager for the state board. The ruling would formally make the rules part of the state code.

This means the powerful agency would no longer need a “drought emergency” declaration from the governor to act, like the ones issued by Gov. Jerry Brown during the state drought between 2012 and 2017.

Acting on Brown’s orders, the board in July 2014 adopted mandatory monthly conservation requirements for every city and urban retail water agency in the state. The rules took effect in May 2015

Those that routinely missed the mark were sent warnings or were fined. A ban on wasteful water practices also was included. The result of the orders was an almost 25 percent drop in water use statewide.

But plentiful rain and snow fell mostly in Northern California in the winter of 2016-2017, filling reservoirs to overflowing and piling up the snow pack in the Sierra, key sources of more than 30 percent of Southern California’s water supply.

Brown declared the drought over in April last year. The regulations — including laws against wasteful water practices — expired on Nov. 25.

The new rules would outlaw, in perpetuity, the following practices:

“This is one step in making conservation a way of life in California,” Gomberg said.

He said the state would rely on residents to rat out water wasters for enforcement. One way to do so is to fill out a complaint form with the address of the potential violator by going to www.savewater.ca.gov.

No one would be above the law, Gomberg said — as proposed, the regulation applies to residents, businesses and government, including state governmental entities such as Caltrans.

The agency will investigate each allegation of misuse when the complainant shows “good cause” or the board believes a misuse has taken place, according to the regulation.

The water board will send a fix-it letter, and if the violator complies, the issue is resolved. But if the inspector deems the business or residence to be repeat offender, a fine of up to $500 per day would be issued along with a cease and desist order.

If the user continues to waste water, the state can rescind the holder’s water permit or license. If the violator ignores the order, the state board can ask the state attorney general’s office to take action.

Gomberg said the agency’s current enforcement staff can handle the complaints. “I do expect an uptick but we can do it without hiring new people.”

Ending grass medians in the state by 2025 will be among the biggest changes enacted in the new regulations, Gomberg said. Unless a city or county can prove the irrigation is necessary for a community purpose, or that the median is irrigated using reclaimed water, the grass there will either have to go brown or be replaced by rocks or woodchips.

While trees can be planted in medians, they must be more climate-compliant trees. These can and should be watered, he said.

If pending legislation passes that gives cities and counties the authority to issue fines for water wasting, then the state’s enforcement role will be diminished, Gomberg said. But such legislation would take effect on Jan. 1, 2019 at the earliest.

In an email, Joseph Ramallo, a spokesman for the Los Angeles Department of Water and Power, said the agency supported the water board’s expected actions and saw regulation “as a part of making water conservation a California way of life.”

“It is just good common sense not to allow the water to run off the sidewalk and to fix your broken sprinklers,” said Dan Arrighi, water resources manager for San Gabriel Valley Water Co., one of the largest water retailers in the state.

Many cities in Los Angeles, San Bernardino and Orange counties get their water from the ground. It will take years of replenishing with water piped in from Northern California to return the aquifers to safe levels, he said.

“Even if a March miracle does come and we get rain, we are still not out of the woods,” he said.