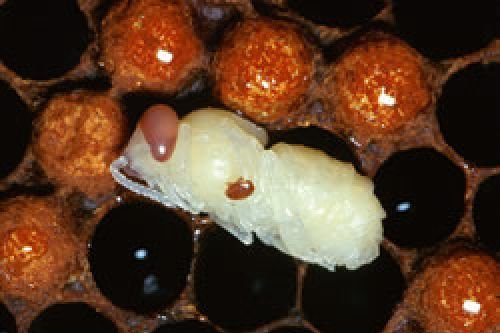 Bees in the United States and Europe are starting to evolve through natural selection to survive a mite that has been decimating their populations.

Professor Stephen Martin, chair of animal ecology at Salford University in the United Kingdom, said in some instances bees were living with varroa mites and an associated virus, without any other treatment.

“We are trying to understand what is happening,” he said.

Although the process of evolution is slow, it has given the industry hope and sparked an interest in better beekeeping methods, with people entering the industry to try and save the bees.

“Without the beekeepers in some areas, the honey bees would have disappeared completely,” Dr Martin said.

“One of the benefits for Australia is if we can understand what is going on, we can tell you [Australian beekeepers] what to look for, what sort of set-ups work, what treatments are needed.

“It used to be very bleak for a long time, [but] the bees are sorting themselves out.

“We just need to help the beekeepers understand how to speed up that process.”

Australia will not be immune from mite

However, Dr Martin, who was a keynote speaker at the Queensland Beekeepers Conference, also warned the devastating varroa mite would get into Australia and cause serious damage to the nation’s honey bee industry and native bee populations.

He said it was a matter of when, not if, the varroa destructor mite established itself in the country’s bee colonies.

“It is a testament to your biosecurity service that it is not here yet, but we live in a global community and, as a case in Townsville recently showed, it is just a matter of time,” Dr Martin said.

“It will just come in accidentally on a passenger or in a shipping container. You are lucky so far, but eventually it will arrive.”

Dr Martin said he would not wish the introduction of varroa on anyone.

“It has spread around the world, but it is not the complete devastation some think it might be,” he said.

Beekeeping has not collapsed in Europe or America, but it requires a huge amount of management, more intervention, and increased use of pesticides into colonies to control the mite.

“You will suffer a large number of colony losses of up to 80 to 90 per cent initially, until people start to get used to it,” Dr Martin said.

“The other big problem is you will lose all your feral colonies as well, and [with] that free pollination disappears.

Every colony that dies breeds mites and they go back to reinfest colonies even if they have been treated.”

Dr Martin said the impact on the bees was subtle because it was usually a couple of years before the colonies started to die.

But by that time, the mite had established itself around the country.

He said while the varroa mite sucked the blood of the bee, it was the transmission of a virus into the bee that really caused the damage.

“In areas where there is no virus, the bees and the mites can live together, but this is extremely rare,” he said.

“The mite is simply the vector for the virus to get into the bee.

“In Europe and America almost every single bee has got the virus.”

Dr Martin said there had been massive colony loss in the US and Europe, and many commercial beekeepers had lost their livelihood, while hobby beekeepers had stopped keeping bees.

Compounding the problem, he said, was the fact that miticides quickly developed resistance, and the virus appeared to be impacting other pollinators.