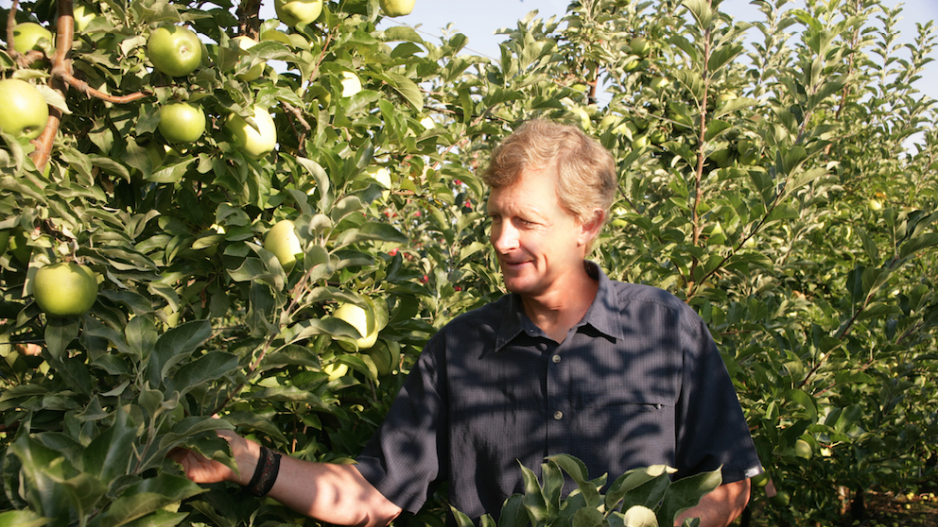 Okanagan Specialty Fruits president Neal Carter founded his company in the Okanagan before selling it to U.S. biotechnology giant Intrexon.

Okanagan Specialty Fruits’ target to generate US$1 billion in sales by 2030 moved a small step closer on January 30, when the Canadian Food Inspection Agency and Health Canada cleared the way for the B.C. company’s third variety of genetically modified apple, the Arctic Fuji apple, to be sold on Canadian grocery shelves.

In 2015 and 2016, the two government organizations approved domestic sales for two other Okanagan Specialty Fruits varieties of non-browning apple: the Arctic Golden and the Arctic Granny.

The ambitious Summerland-based company has yet to sell any apples in Canada, and it started selling its first products in the U.S. only a few months ago. Ramping up to substantial production is possible, however, because deep-pocketed U.S. biotechnology company Intrexon (NYSE:XON) bought Okanagan Specialty Fruits in 2015 and made the venture a wholly owned subsidiary.

“The only thing that changed was that instead of having 45 shareholders, we now have one,” said president Neal Carter, who co-founded the company.

He told Business in Vancouver that Okanagan Specialty Fruits has 280 acres of orchard in production in Washington state and is preparing about 400 additional acres to be in production by May.

“We’ll add another 800 acres next year and 1,000 acres the year after that,” Carter said. “By 2022, our company will produce more apples than the entire Okanagan Valley. Our orchards are new, state-of-the-art, high-density orchards that produce three times more apples per acre than ones do here in B.C.”

Buying and operating orchard land in the Okanagan is unlikely, he added, because land costs are significantly higher than in Washington state, where all of the added orchard land up until 2019 will be located. Starting in 2020, Carter expects that the company will start managing orchards in either Eastern Canada or the eastern U.S.

“Rather than trucking apples across the country, we’d rather grow and slice them closer to the marketplace,” he said.

The U.S. Food and Drug Administration (FDA) approved the company’s first two non-browning apple varieties but has yet to approve the company’s Arctic Fuji apple.

Not everyone is happy with Okanagan Specialty Fruits’ progression, although critical voices have softened in the past five years.

Some people oppose all genetically modified foods; others, such as many Okanagan apple growers, have had concerns about their own businesses.

“If they’re growing in the U.S. then all the power to them,” BC Fruit Growers’ Association president Fred Steele said of Okanagan Specialty Fruits.

But Carter rejected both concerns.

Okanagan Specialty Fruits’ non-browning varieties do not add DNA from other apple varieties. Instead, an enzyme is turned off.

As for labelling, Carter said all of Okanagan Specialty Fruits’ products have so far been sold in pre-sliced form, in 285-gram packages that are clearly marked.

“We want to grow the Arctic brand.”

Carter has no plans to sell whole, fresh apples, although he said the company might branch into selling dehydrated, sliced apple products.

Other companies’ dehydrated apple products that are on the market require chemicals to make apple flesh look pale.

Carter believes his company will be permitted to state that its dehydrated apple slices have no artificial additives.

Okanagan Specialty Fruits employs 20 people at its Summerland headquarters, eight at a research office in Saskatoon and 150 at its Washington orchards.