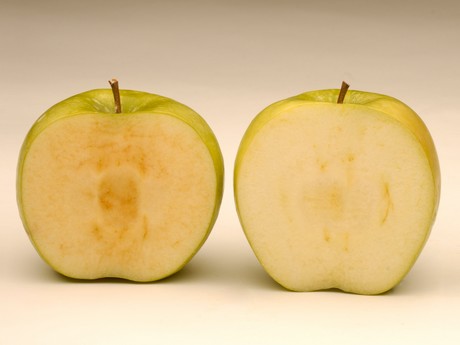 This month, up to 400 Midwest grocery stores started quietly testing packages of sliced “Arctic Apple” GMO apples. The company won’t label its apples “GMO” because, according to Intrexon’s CEO: “We didn’t want to put ‘GMO’ and a skull and crossbones on the package.”

Positive outlook for the market

Arctic® apples are making their debut in stores across the United States over the next few weeks. The apples will initially be available as a sliced apple product that has been developed to avoid turning brown once sliced, bitten, or bruised. The company behind the product, Okanagan Specialty Fruits, saw an opportunity to bring to the market a sliced apple product that retains its appeal, without the use of any preservatives. They hope that people will be more likely to consume apples with the new Arctic® apple range.

The apples have been in the thought process for a long time for the head of Okanagan Specialty Fruits, Neal Carter. He explained the background that led to their development. “The development of Arctic® apples has certainly been quite the adventure. I am a bio-resource engineer and in the mid-90s I came across research done by CSIRO – an Australian federal government agency for scientific research – to improve potatoes with a non-browning trait through biotechnology. As an apple grower, I was very aware that apple consumption had been declining for decades while obesity rates had simultaneously been sharply rising. My wife and I felt that we could help boost apple consumption through a similar biotech approach with apples, as non-browning apples would be more appealing and convenient.”

Carter also said that he hopes to see a reduction in food waste when it comes to apples. “Additionally, we felt this small genetic change could significantly reduce food waste, as nearly half of all apples produced end up wasted, many due to superficial bruising,” he said. “Our long journey has also included years of research and regulatory reviews before we were able to get to this point, but we’re pleased to share that Arctic® apples are now among the most studied foods on the planet, and regulators like the USDA and FDA have agreed that they’re just as safe and healthful as their conventional counterparts.”

One of the appeals of apples are the numerous varieties available in the fresh market, each with their own characteristic flavor and texture. Arctic apples will also be available in several different varieties, the first of which will be Golden, followed soon by Granny Smith and Fuji. They will initially be available in 10oz packs designed to be conveniently taken with you as a snack.

“Arctic® Goldens will be the first of our delicious, non-browning apple varieties available to consumers,” Carter announced. “In 2017, these –

For the rest of this article click the following link… http://www.freshplaza.com/article/183745/Arctic-apples-now-available-in-US-stores