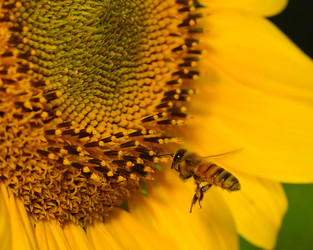 Flowers emit mixtures of scents that mediate plant-insect interactions such as attracting insect pollinators. Because of their volatile nature, however, floral scents readily react with ozone, nitrate radical, and hydroxyl radical. The result of such reactions is the degradation and the chemical modification of scent plumes downwind of floral sources. Large Eddy Simulations (LES) are developed to investigate dispersion and chemical degradation and modification of floral scents due to reactions with ozone, hydroxyl radical, and nitrate radical within the atmospheric surface layer. Impacts on foraging insects are investigated by utilizing a random walk model to simulate insect search behavior. Results indicate that even moderate air pollutant levels (e.g., ozone mixing ratios greater than 60 parts per billion on a per volume basis, ppbv) substantially degrade floral volatiles and alter the chemical composition of released floral scents. As a result, insect success rates of locating plumes of floral scents were reduced and foraging times increased in polluted air masses due to considerable degradation and changes in the composition of floral scents. Results also indicate that plant-pollinator interactions could be sensitive to changes in floral scent composition, especially if insects are unable to adapt to the modified scentscape. The increase in foraging time could have severe cascading and pernicious impacts on the fitness of foraging insects by reducing the time devoted to other necessary tasks.

by Connie Krochmal A number of seed and oilseed crops happen to be good sources of forage for bees. This group includes safflower, sesame…