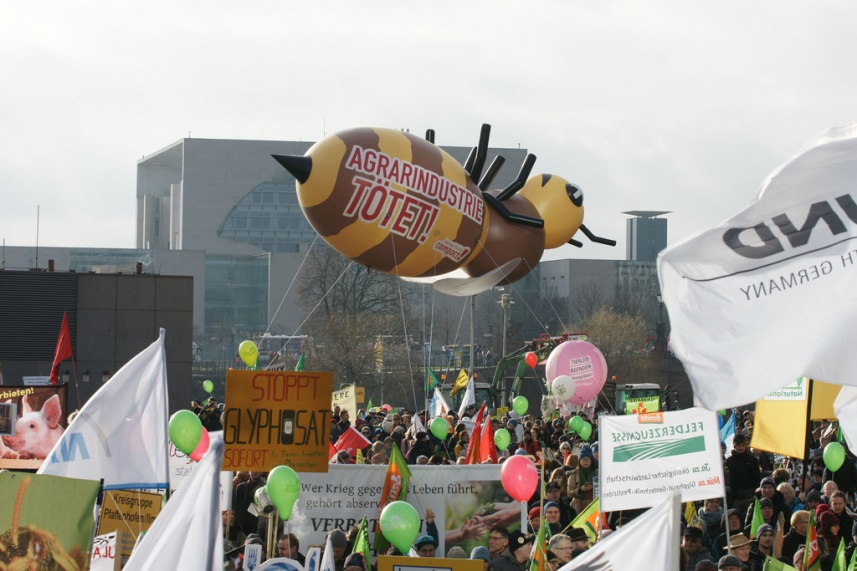 Over 33,000 people took to the streets of Berlin, 20 January 2018, to demand a new food and farming policy that benefits small farmers and protects the environment.

Farmers, consumers, beekeepers and food activists joined the march that was led by 160 tractors and ended in front of the Brandenburg Gate. Equipped with colourful posters and creative costumes, they walked under this year’s motto “Stop the agro-industry!”.

Many dressed up as cows or chickens, others buzzed across the city as bees or butterflies.

A giant dead bee was floating in the air, lying on its back and carrying the slogan “Agro-industry kills”. Farmers from all across Germany had travelled for many hours by tractor to take part. The event was organised by a broad alliance of more than 100 farmers’ organisations: environmental, animal welfare and development organisations, known as “Wir haben es satt!” (we are fed up).

It was the eighth year in a row that the protesters demand a fundamental chance of course in agriculture during the International Green Week – Europe’s biggest agricultural fair that currently takes places in Berlin.

The protesters called on the future German government to show courage and quickly introduce a greener agricultural policy.

“The industrial food and farming industry is causing problems for farmers, the climate, animals and the environment, both at local and global level,” said a spokesman for the alliance, Jochen Fritz.

“Politicians must not delay any longer the urgently needed conversion to an agricultural system that is friendly to the environment, animals and the climate and in which farmers can live well from their work,” Fritz added.

Many protesters called for a ban on the controversial weed killer glyphosate. Others marched for animal welfare and less meat consumption, against the global close-down of small farms and against subsidies for the agro-industry.

“Food is political – more and more people start to realize this. But politicians nurture an agricultural sector that detrimentally affects the environment and animals in the name of productivity,” Fritz said.

The organisations behind the march also demand a reform of the EU Common Agricultural Policy and call for an immediate end to subsidy payments for investors who buy up land without actually being farmers.

“Farmers who cultivate the land in an environmentally-friendly way and operate ethical animal farms should be supported with direct-payment subsidies,” said Georg Janßen, the head of the farming association Arbeitsgemeinschaft bäuerliche Landwirtschaft.

To make their voices heard, many demonstrators joined the march with pots and spoons for a noisy protest concert. (ab)