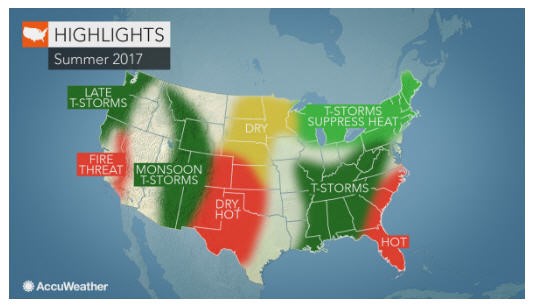 AccuWeather Global Weather Center – April 26, 2017  – AccuWeather reports wet weather and severe storms will keep extreme temperatures at bay in the Northeast and mid-Atlantic this summer, while heat and humidity plague the South.

Meanwhile, California will be at risk from wildfires due to abundant vegetation as the Northwest grapples with outbreaks of severe weather.

Early storms to hold back extreme heat in Northeast; Thunderstorms aim for mid-Atlantic

Unlike the summer of 2016, when drought conditions gripped the Northeast and mid-Atlantic, this summer will bring on-and-off wet weather to both regions.

“Especially in June and July, we should see some showers and storms from time to time,” AccuWeather Lead Long-Range Forecaster Paul Pastelok said.

The moisture will help to hold back extreme and prolonged heat.

“I think we’ll have some hot weather, but it won’t be as prolonged as we saw last year a couple of times,” he said.

However, northeastern I-95 cities, including New York City and Boston, may end up with slightly more 90-degree days than normal – although still fewer than last year.

“[Areas] farther south may be at or slightly below normal due to a little bit more moisture over the summer,” Pastelok said.

More than 100 fires have ripped across Florida this spring, and the threat shows no sign of relenting into the summer season.

“The only thing that can really save them early on will be a tropical hit that could take place,” Pastelok said.

“The chances are a little bit low on that, so we’ll probably have to deal with more smoke in the air down in central and southern Florida going into the early summer,” he said.

Areas more likely to be impacted by the tropics early on include the western Gulf Coast, including New Orleans and Houston. The Carolina coast may also be at risk.

“I’d be concerned about Charleston up to Cape Hatteras,” Pastelok said, adding that water temperatures are already running above normal in that area.

Severe weather will also threaten the Carolinas in June.

Across the Southeast, showers and storms will be widespread. With humidity levels running high, flooding downpours may result.

Early in the season, periods of warmth across the northern Plains will trigger severe weather.

However, the storms are not expected to last long. Drier conditions will set in from mid- to late season, allowing temperatures to climb.

How persistent the heat is will determine whether a mild or moderate drought is likely to develop. Prolonged dryness could put stress on crops later in the season.

“This is a tricky area that we’re watching very closely,” Pastelok said.

Despite significant rain and mountain snow across California early this year, wildfires will still pose a threat this summer.

Significant precipitation has led to abundant vegetation which can serve as fuel for fires, Pastelok said.

Early in the season, heat may be inconsistent across California, but temperatures are predicted to rise significantly in July, increasing the chances for fires.

Meanwhile, the Northwest will face periods of severe weather.

Shower and thunderstorms will strike in June at times, but the latter part of the season will bring the greatest risk for severe weather across the interior Northwest, including Spokane, Washington, and Boise, Idaho.

By Will Dunham, from Green Business Earth is home to just over 3 trillion trees – the redwoods of California, the olive trees of…