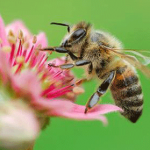 The Umbelliferae family is a treasure trove of pollinator plants. This group is named for the flower heads, which are typically umbrella-shaped. It contains carrot, parsley, and some commonly cultivated vegetables and herbs.

A number of these perennial or biennial species grown as annuals are good nectar and pollen sources. Parsnip, a biennial, can provide a small honey crop of 10 to 50 pounds per colony. Celery is another good honey plant.

The cultivated carrot (Daucus carota) and its naturalized counterpart, the wild carrot or Queen Anne’s lace, were introduced to America by the Europeans. Queen Anne’s lace grows wild in all mainland states. This species is an excellent source of nectar and pollen.

The nectar flow is best during hot weather and also when the plants are growing in heavy soils. This species can sometimes bring a surplus honey crop of around 65 pounds per colony.

Carrot and Queen Anne’s lace honey ranges from white to various shades of amber to dark yellow. Varying from mild to strong flavored, it has a distinctive taste and an aroma much like that of the plants. This honey readily granulates within a few months.

This article provides an in-depth look at three herbs in this family – chervil, fennel, and parsley, all of which are superlative choices for bee gardens. Additional carrot family herbs will be covered in a future article. 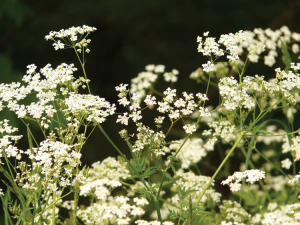 This herb was originally native to Asia Minor and Western Asia. It was first cultivated in Syria. Chervil was introduced to southern Europe where it naturalized. The common name comes from a Greek word that means “herb of rejoicing.”

Chervil was used by the ancients, especially in Europe. The Romans have been credited with its introduction to various parts of the continent.

Widely used in ancient Rome, this herb is most popular in France where its main use is in herb blends. For best results, add this mild flavored herb at the last minute to hot dishes for heat diminishes its subtle flavor. Normally, chervil is used in combination with other flavorings rather than alone.

A related native species in Europe and Britain called cow parsley (Anthriscus sylvestris) can be used the same way as chervil. It features a slightly stronger flavor than chervil.

Chervil is a superb herb for bee gardens since this tends to bloom rather quickly – usually within six weeks or so from planting, especially during warm weather. Several successive sowings of this can be planted several weeks apart, depending on the climate.

This species can provide a small to moderate honey plant. In addition, chervil is especially rich in pollen.

Although chervil has some resemblance to the curly leaved parsley, this annual is more upright. It bears finer cut foliage that is rather sparse when compared with that of parsley.

Sometimes self sowing, this species is extremely tolerant of frost. Easy to grow, chervil can be planted during the Fall or Winter in warm areas. The plant doesn’t respond well to hot weather.

Chervil seeds can also be sown during very early Spring as soon as the ground can be worked. It prefers night temperatures of 55°F or below.

Fresh chervil seeds germinate best. These can be stored for about three years, although the germination rate tends to fall. Avoid covering the seeds.

These will sprout in about 10 days. Chervil doesn’t transplant as easily as some herbs. For that reason, use peat pots if you plan on starting it early indoors. This ensures the roots won’t be disturbed when transplanting to the garden.

Chervil plants should be spaced eight inches or so apart. Keep the soil evenly moist. The plants experience few insect or disease problems.

This herb prefers light shade, especially in warm climates. It can tolerate slightly more shade than most other herbs. A sandy, rich soil high in organic matter with a pH of 6.5 to 8 is ideal.

Several varieties of chervil are available to gardeners. Curled chervil is a variety that is slightly less hardy than the species. In addition, this vigorous plant is easier to grow than the species. It also begins yielding earlier and provides a larger overall yield. The attractive, curled foliage is milder flavored than that of plain chervil.

Vertissimo chervil is an European variety that is tolerant of cold and heat. The dense, vigorous plants are the same height as plain chervil. The lacy, shiny, flat, deep green leaves offer a very mild, anise-like flavor. This variety tends to bloom late in the season. 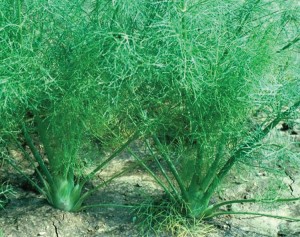 This is also known as sweet fennel. Native to Europe, fennel was used by the ancients. The plant grew in the fields where the marathon or Battle of Marathon took place in ancient Greece.

Charlemagne is credited with introducing the plant to central Europe where it was grown on his estates. The Anglo-Saxons used the plant before the Norman Conquest. In medieval times, people believed the plant could protect them against witches.

The plant was introduced to America by European colonists. It has naturalized in all states except Montana, Idaho, Wyoming, Colorado, the Dakotas, Minnesota, Oklahoma, Arkansas, Mississippi, Indiana, Vermont, and New Hampshire.

Fennel was used as a food and flavoring in ancient times. The young shoots were eaten as a vegetable. The anise-flavored leaves are added to salads. The seeds also serve as a flavoring. The oil appears in perfumes, soaps, and candy.

This nectar and pollen plant can yield a good honey crop, especially in California. The nectar is readily available to bees over a long period. Each of the individual blossoms can provide 0.012 to 0.035 mg of nectar daily.

On average, fennel can bring 25 to 110 pounds of honey per acre. This is light amber.

Sometimes grown as an annual, this erect, branched perennial typically reaches four to five feet in height and 2½ feet across. It features a ridged, blue-green stem. The feathery soft leaves resemble those of dill. They consist of thin, thread-like segments.

In California, fennel typically blooms from May to August. Elsewhere, flowering extends from July to October, depending on the location. The very small blossoms are pale yellow. They form large flat umbels, which can contain fifteen to twenty-five single flowers.

The oval, ridged seeds are flat. For culinary purposes, fennel seeds are harvested when they turn brown.

Hardy in zones six and higher, fennel prefers full sun. A rich to average, well drained soil is preferred with an alkaline pH of 6.0 to 8. Thriving in light soils, fennel is intolerant of heavy clay and wet conditions.

This herb can withstand frost and heat. Avoid planting it near wormweed or coriander for they can harm fennel. Likewise, fennel can have a detrimental effect on kohlrabi, tomato, bush beans, and caraway.

Fennel is grown from seeds, which should be planted 1/8 inch deep after the danger of frost has past. This herb is typically direct sown since the plant doesn’t transplant well.

Sometimes, fennel is started early indoors in peat pots. Avoid damaging the roots when planting these pots into the garden. This plant can experience root rot and nematodes.

Fennel plants should be spaced 12 inches or so apart, depending on the type. A number of varieties are available. Florence fennel is less suitable for bee gardens since the bulbous base would be harvested before the plant has a chance to bloom.

Bronze fennel is a very good choice for pollinator gardens. It is sometimes grown as a hardy annual mainly for the very attractive, lace-like foliage. Initially purplish-brown, the leaves mature to a lovely reddish-bronze or rust. The vigorous, two-foot-tall plant tends to bloom later in the season, mostly from July onward when compared to the species. The flat flower heads contain ocher colored blooms. 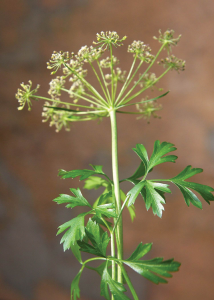 Parsley originated in southern Europe, Greece, Lebanon, and the eastern Mediterranean. Once it was brought to America by the European colonists, the plant naturalized in many areas. It now grows wild over much of the mainland with the exceptions being Oregon, Wyoming, Colorado, New Mexico, Arizona, the Dakotas, Nebraska, Oklahoma, Minnesota, Missouri, Wisconsin, Illinois, Indiana, Kentucky, Tennessee, Alabama, West Virginia, Virginia, Vermont, New Hampshire, and Maine.

This is now commonly used as a garnish and herb. Yet, ancient people associated this plant with the underworld and considered it to be “a harbinger of death.” According to Greek myths, it supposedly “sprang forth from the blood of Archemorus, the forerunner of death.”

Ancient Greeks used the plant in funeral rites. Parsley was also associated with Hades and with the myth of Persephone, who spent part of the year in the underworld.

The seeds are extremely slow to germinate, sometimes taking four to six weeks. This reluctance to sprout gave rise to the saying that “it goes nine times to the Devil and back before breaking into leaf.”

The ancient Romans used the leaves, stems, and seeds as flavorings. One of King Henry VIII’s favorite foods was parsley sauce. The root of the flat leaved variety is also used to flavor foods.

Parsley is a source of nectar and pollen. It can bring a modest honey crop of 55 pounds or so per colony.

This much branched, hardy biennial is typically ½ to 1¼ feet for much of its life. Once parsley begins flowering, the plant’s height can easily double. The leaves can be either flat or curl, depending on the variety. Around 300 B.C.E., Theophrastus, the Greek writer, provided descriptions for both types.

Parsley normally blooms the second year. However, if the first Summer is very warm and dry, the plant can bear blossoms. The usual blooming period is from late Spring to early Summer. The greenish-yellow flowers form flat clusters.

Hardy in zones three and higher, parsley is cold tolerant, but abhors hot weather. Grown from seed, the plant can self sow. It prefers full sun or light shade.

The plant can be direct sown or started indoors in peat pots. To hasten germination, there are several options. Methods that seem to work well are freezing the seeds or soaking them in boiling water before planting. Fresh seeds sprout the best of all, so avoid using old ones.

Wait until the soil has warmed to 50°F before direct sowing, which is typically done three to four weeks before the last frost. Plant the seeds ¼ inch deep.

Space parsley a foot or so apart. Seedlings that are started indoors can be transplanted outdoors about two to four weeks before the last frost.

Keep the soil evenly moist for parsley. Potential diseases of this herb include crown and root rot. The most common insect problems are caterpillars-especially the parsley worm, and carrot weevils.

A large number of parsley varieties are available. The two that are best suited to bee gardens are the following.

Moss curled leaf parsley is a popular, traditional variety. Improved strains of this are available. The vigorous, compact plants are typically less than 1½ foot tall. This variety can tolerate light frost. Easy to grow, it adapts to most regions. The deep green, uniform leaves are so tightly curled that they look almost mossy.

Plain leaf parsley is another widely grown, standard variety. The erect plants are vigorous. This heirloom dates to the early 1800s. It bears shiny, vivid green, flat, long-stemmed leaves, which are flat and finely cut.

Connie Krochmal is a long time plant writer and beekeeper. She has recently relocated to Kentucky.