The Great State Of Kansas 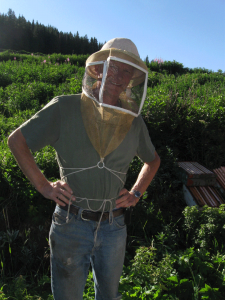 My gal Marilyn and I just love Kansas! We took the scenic route back to Colorado from the Kansas Honey Producers meeting in Hays. South through Schoenchen and Liebenthal – German Catholic Kansas, with religious billboards and graceful stone churches in even the smallest towns. Then east on lonesome highway four through corn and milo and Winter wheat, to the Cuartelejo Pueblo ruins.

It’s not on the map, but we stumbled onto Battle Canyon, site of the 1878 Battle of Punished Woman Fork. With winter looming, starving Northern Cheyenne under Little Wolf and Dull Knife slipped away from the reservation at Fort Reno, Oklahoma and headed for their ancestral home in the Yellowstone country.

They dug in at the limestone caves of Punished Woman Fork, waiting for the pursuing United States Army. You can visit the Indians’ rock-rimmed rifle pits on the bluffs above the caves and creek bottom. Below huddled 261 women and children. When 250 troops from Fort Dodge arrived in the late afternoon of September 27, the Cheyenne tried to lure them into ambush in the shallow canyon leading to the caves. When that failed, 92 warriors engaged them on open ground.

The Cheyenne subsequently retreated into the canyon, and the infantry thought they had them surrounded. But on a dark and windy night the Cheyenne somehow slipped away, ever wending their way towards home.

Things you can learn if you just get off the Interstate!

I gave two talks in Kansas, but only one was on Varroa mites.

Before I gave a sugar-shake mite test demonstration, I quipped that I hoped I could find a mite or two, because it would be pretty pathetic if I couldn’t, right? Well, I’d worried needlessly, because my 250-bee sample yielded some 75 mites, which works out to a 30 percent infestation rate. That hive should have been dead, and by now it probably is.

It wasn’t all serious mite talk. I told those Kansans the tale of the morning I got stung (twice!) on the worst place any man can imagine getting stung, and how on that very same day I ran into the ghost of a dear dead friend!

For her talk, Marilyn recounted our trip to the international bee congress Apimondia 2013, in Kiev, Ukraine. We were invited by beekeeper and Ukrainian ex-president Victor Yushchenko, who can boil up a mean carp soup.

A week later I got elected president of the Colorado State Beekeepers Association at our semiannual meeting in Castle Rock. But not before getting grilled by a couple of members who challenged my ideological purity on the neonicotinoid pesticide issue. These guys blame neonics for honey bee losses. I’m not so sure.  I said, “Look, I’m not convinced that, properly applied, neonics kill honey bees. I do believe they’re hell on bumblebees and other native bees. I just call it like I see it. I’m offering you half a loaf. You should take it.” Ultimately they did, and one of these gentlemen was kind enough to nominate me for the presidency.

Keith Delaplane from the University of Georgia gave fascinating lectures on the importance of queen bees mating with multiple drones, and on the hive as a superorganism. Later, at supper, he confided, “I’ll tell you a dirty little secret. Honey bees aren’t very efficient pollinators. For many crops, our native pollinators do a much better job.” The exceptions, he pointed out, are Old World species like almonds and apple that co-evolved with honey bees. He told us about a hardworking native bee that specializes in pollinating  Georgia blueberries.

When we got home, it was nearly November, and I hit the deck running. I segregated my hives: Ten frames or better got set aside on four-way pallets to go to the California almonds on one of Paul’s loads. The remainder stay here. So there were a lot of loads of bees coming into yards, and leaving them. A weak hive would get moved out, and a strong one would come in to take its place on a four-way pallet. All this is hopelessly complicated, because you can’t just consolidate hives, four to a pallet. If you move hives more than three feet within the apiary, you’re going to wind up with foragers who can’t find their way home, and we wouldn’t want that.

After countless days moving bees, Paul mentioned something that I once learned but inexplicably forgot. They talked about this at a bee meeting I went to in July. You can combine hives to make the grade for the almonds, if you do it a special way. Here’s how: You combine all the bees from one hive into a single deep super, and you put two pollen patties side by side on top. Then you put the second hive on top of the first, again, shaking its bees into one box.

Paul said he never had any luck combining hives for the almonds until he started doing it this way. Weak colonies would just poop out, even after the addition of another weak hive. Now his combination hives return from the almonds rarin’ to be split. You don’t use newspaper, like they tell you to in the bee books. Just pollen patties. You don’t have to send your bees to California to try this. You could do this for any hive unions but especially for overwintering colonies. The old saying is to take your losses in the fall, not the Spring. That’s sound advice.

I have no idea why uniting hives this way would work better than with newspaper. It seems like hives either unite peacefully under one or both queens, or they don’t. But I do know one thing. I know who to listen to.