Just down the road from Colby Farm, I caught up with veteran Colorado beekeeper Paul Limbach at his honey house. He was just back from a fishing trip to Canada and Alaska. After he regaled me with tales of his Far North adventures, I coaxed him into talking about his life with honey bees.

Paul, so you were born into beekeeping . . .

I was born in 1947 in a little one room house in Grand Valley, Colorado, which is now Parachute. My dad started working for John Holzberlein in 1946. John was a very famous beekeeper at the time. He was president of the [American Beekeeping] Federation. He was the first guy from Colorado to go to California to raise nucs and queens. He did that clear back in the 40s and 50s. 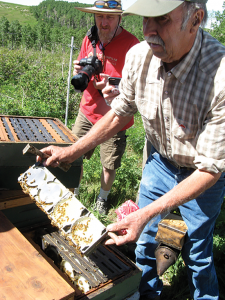 Did you have bigger honey harvests in the old days?

Absolutely. My dad retired with a 120-pound average. We got our honey from alfalfa just like we do now, but back in those days they cut with horses, or a tractor and a sickle mower, and it took ‘em a long time. If you had a big ranch, by the time you had the first cutting up, the second cutting was starting to bloom on the other end. So you almost always had something blooming, alfalfa-wise.

There was a lot more sweet clover back then, and I blame the county weed spray programs that eliminated it along the highways and roadsides, and then they started spraying the ditch banks, too. Sweet clover’s pretty easy to kill. There was white sweet clover and yellow sweet clover, and that’s all basically disappeared now. The alfalfa’s still there but they don’t raise seed from it anymore because there’s too many deer. The deer eat all the seeds.

Average since I took over the business is a little under 50 pounds. The high was 100. Of course we have a lot more bees now. If you only have four or five hundred hives you can put a lot more energy into each hive than you can with 2500.

What did you major in at Colorado State University?

Entomology. I looked for something I could do other then keep bees, and I couldn’t ever find it.

I heard you were a ski bum for awhile.

When my dad ran the business, I wasn’t busy in the winter, and the first few years I was out of college I worked up in Aspen for about five years. I worked for a ski lodge that had about 30 guests. I cleaned rooms, and we got done about noon every day. We could ski the rest of the day.

Did you ever quit beekeeping?

No, I’ve done it my whole life. I’ve kept bees in Texas and California, and I worked bees in Australia for one Winter. In Australia all the honey came from eucalyptus. There’s something like 600 species of eucalyptus trees, and something was always in bloom. That guy’s bees were spread out for miles and miles. That was in 1972 or 1973, and he was much more mechanized than most of the beekeepers in the U.S. at the time. He had a Bobcat forklift, a semi, and 1000 hives.

How long were you president of the Colorado State Beekeepers Association?

I don’t remember, but I was president or vice-president longer than probably anybody else.

What were the big issues back then?

Pesticides. That was back when Penncap M and Furadan were big problems. Beekeepers used to get taxed by the state, and that was a big issue back then, too.

How did University of Minnesota bee researcher and MacArthur fellow Marla Spivak come to work for you?

I’ve ended up having several people who are in research work for me. Bob Cox worked for me for a lot of years. He worked at the Weslaco bee lab for a long time. Marla, I met her when I went down to learn to inseminate queens from Steve Tabor at the University of Arizona. That was in the early seventies.

Marla was one of the students who helped teach me insemination. Marla had a friend named Abby who also taught me, and both Marla and Abby worked for me for a year or two after that. They wanted to come to Colorado.

Tell us about your business today.

Our business today is kind of unique because we’re also the only business that has a permit to put bees on the National Forest. We run bees in the high country [on the Flat Tops.]

We’re really spread out, and we drive 150 miles to work some of our bees. Some of it’s dry-land alfalfa, and for some reason there’s not many insects bothering the alfalfa. Some of it’s in the CRP (Conservation Reserve Program), so once it starts blooming, it blooms until it gets too dry. They can’t harvest it if it’s in the CRP.

You have bees all over northwestern Colorado.

Right – Rifle, Silt, Meeker, Craig, Hayden, and then on the Flat Tops. We have some other bees in the high country on private in-holdings, too, up towards Trappers Lake.

And you send your bees to California to pollinate the almonds.

Before that, we left them in permanent locations. I almost never moved bees, until I started running them up on the [National] Forest. I started on the Forest just as I got out of college. I think I’ve had that permit since 1972 or 1973.

Were you the first person to do that?

Yes, back then it was easy. Now it’s tough. I got grandfathered in.

So you have a wife, Nanci, who runs a wildlife rehabilitation facility, and she does a lot of work rescuing bears. And I know you spend a lot of time keeping them out of your bee yards. How’s that work out between you two? Do you argue about bears when you take your fall trips?

(Laughs) Well, I don’t believe any of her bears have gotten into a bee yard once she released them. They get a tag when she lets them go. I can’t blame her for any of my problems. There’s just so many bears these days.

My father was in business 30 years, and he had one bear get in his bees.

To what do you attribute the resurgence of bears?

In the old days they had a Spring bear hunt, and they also allowed people to hunt bears with dogs. In the Spring, the bears were coming out of their dens, and people knew where they were. One of the good things about Colorado is that the state provides beekeepers with [solar powered electric] fences. We’re very lucky that way.

We maintain about 75 fences. That alone is a tremendous amount of work.

You told us how old you are. We know you like to fish. What are your retirement plans?

(Laughs) Well, I’m just going to keep keeping bees as long as I’m physically able. I’ve enjoyed the heck out of it. I feel like I’m one of the luckiest people in the world, because I enjoy my job immensely.

Work ‘til you drop, huh?

Yeah, I’m hoping these young guys working for me are going to start taking over more of the business, because I’m physically not going to be able to do it too much longer.

My wife Nanci would like to see this place put in some kind of a conservation reserve type system where it preserves the beekeeping and her wildlife rehab center. That’s pretty complicated, but she’s got a lady that wants to keep it going, and [Paul’s manager] Derrick wants to keep the bees going, so between them we’re hoping something like that could work out.

As October evening shadows lengthened, our interview ended. I didn’t want to keep Paul any longer. He had to pack. He was leaving in the morning for Montana – to go fishing.