Last November down by the Colorado River, Paul and the boys stacked four-way pallets of bees three high. Semis rolled in three and four times a week to haul the little darlings to the land of almonds and honey. Derrick and his crew pamper them through the California Winter with pollen patties, sweet syrup and oxalic acid. In February they move them into the almonds. By late March, they’re home again, cheerfully bustin’ out of their boxes. In a good year.

I piggybacked most of my best colonies on one of Paul’s loads. I had ‘em jacked up on pollen substitute, and on the day I’m going to tell you about, I was getting them all sorted and ready to go.

About 11 a.m. the landowner came by on a four-wheeler with some hunters in tow. He asked Paul how long we were going to be, because his hunters wanted to shoot at some elk bedded down by the river. We’d be in the background. 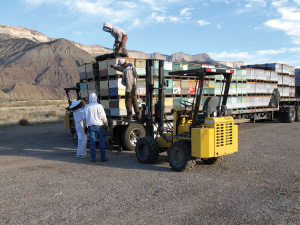 I ate lunch up the river under a mighty ancient cottonwood, then stretched out and tumbled into dreamland on the banks of the Colorado. I awoke to a rainbow of sunlight shimmering on a gentle riffle. I found this magical moment so satisfying that I went back to sleep.

A little before one, I heard repeated gunfire from downriver. “Let ‘em have their sport,” I mused. “They’ll move on, and I can go back to work.”

By 1:30 I was back on the job, pulling Apivar mite strips – slow going, because they can be hard to find suspended between the frames. You sometimes have to smoke the bees off the top bars to see the strips.

I was under the gun, because I was behind schedule, which for me is pretty typical. Paul was coming back the next day to do the final hive stacking. The truck schedule kept changing, but he wanted to be ready.

A couple of hours later, I was still pulling strips, when I heard shots again. Across the river two or three hundred yards away, someone in blaze orange was shooting at elk running along the riverbank. I was directly behind the elk.

I hit the deck, and sprawled behind four-way pallets of bees. Very undignified! The firepower was impressive. It sounded like the Battle for Mosul. I have no idea how many animals got shot or how many hunters were shooting. I waited for a lull, then took a peek. I saw more hunters but no dead animals. Could they have missed that many shots? Then I heard another volley. Were they warning me to get the hell out of there? The whole situation felt creepy, not to mention unsafe, so I closed up the hive I’d been working on, grabbed my smoker and hit the road, leaving gear scattered everywhere. You could call it an inglorious retreat.

Things move pretty quickly at the holding yard. Itineraries change. Trucks roll in. Bees get loaded and trucks roll out. The next day I never had time to combine a handful of colonies that had fewer than the requisite ten frames of bees for the almonds.  You do what you can. In the bee world, nothing ever goes quite as planned. I’ll pay the shipping to send all these bees to California, and once they arrive, Derrick can combine the ones that need it. That’s just the way it is. As the gal Marilyn likes to say, “Don’t let perfection be the enemy of progress!”

I always keep some bees back to Winter in Colorado. I don’t like to put all my eggs in the same basket. I have some apricot pollination customers near Grand Junction. They need bees in March, normally before mine return from California. I make less on these contracts than I would shipping those bees to California, but I enjoy the ritual of taking them into the orchards and watching them work their magic in the fruit blossoms. My growers are grateful to have a reliable supplier of pollinators. I feel it’s a public service.

It’s nearly mid-November as I write. My bees arrived in sunny California, as far as I know. They’re in Derrick’s hands now, and God’s. The home bees are well fed. I have a little beeyard puttering to do, but I’m basically ready to take a break until February. Maybe I can catch my breath.