Last Fall on my gal Marilyn’s birthday trip to Cortez, Colorado, we visited the Pueblo cliff dwellings in Lion Canyon on the Ute Mountain reservation, adjacent to Mesa Verde National Park. Nobody lives on this part of the rez. I asked our Ute guide Bev about beekeeping. She said there wasn’t any. When we arrived at Lion Canyon, I figured we were at least 40 miles from any managed beehives.

But there were bees on the rabbit brush on the canyon rim. In the age of Varroa, these were almost certainly true survivors. God bless ‘em!

Marilyn and I decided at the 11th hour that we ought to go to the 2017 North American Beekeeping Conference this week in Galveston. This is a joint meeting of the American Honey Producers Association, the American Bee Federation and the Canadian Honey Council. For us, this was a complicated decision that factored in, among other things, our lower middle class budget. But Marilyn was ready to get the week off from her school bus driving route. TJ would take care of her blue heeler Pepper. All that remained was to line up a chicken and goose sitter. Howard always comes through for us, and we return the favor. He sits more for us than we do for him, so we generally owe him.

We dropped by Howard and Margo’s to drop off a Christmas card. But before I got around to telling Howard about Galveston, he said, “Don’t forget. We’re leaving town on January 11 for two weeks.”

“Howard, I’m glad you reminded us,” I deadpanned. I looked at Marilyn. She gulped and looked back. Howard had given notice clear back in November. We’d pledged our word. We were on the hook to chicken and cat-sit the same week we’d planned to go to Galveston.  But we never let on to Howard.

This time Marilyn made the sacrifice. “You need to go on this trip,” she told me later. “I’ll chicken sit. I won’t have to take time off from work, and I can use the money.”

You need to understand. Marilyn is the traveler. I’m more the homebody, when I can get away with it. But she knew this time I had a bunch of reasons to go.

I booked my flight on Frontier. Very reasonable! The convention hotels were full, but Marilyn found a cozy Airbnb 10 minutes by car from the convention center. The amiable owner said there was a bike I could borrow, or maybe she could shuttle me to the convention.

All I needed was to drive 160 miles, over Vail Pass, in January, in a 30-year-old-Toyota 4WD, to catch an 8:30 a.m. flight out of Denver. Hopefully there wouldn’t be a blizzard that day.

Maybe there was a better way. Marilyn and I put our heads together. I could leave early the day before, catch the local bus into Glenwood Springs, then the once-daily, 7 a.m. bus from Glenwood to Denver. Sleep at Marilyn’s angelic sister Nancy’s place in the cozy guest bed.  Then, a 5 a.m. light rail trip to the airport. This wouldn’t be so bad. Marilyn convinced me.

I’d still have to get through security and find my gate. That might sound easy to you, but airports are not my best trick. And my flight needed to land on time in Houston, in order for me to catch the mid-day shuttle to Galveston. Tight airport schedules can be a recipe for frustration. We all know that.

There’s a commercial beekeeper I need to mend some fences with. I called Paul to learn if he thought this mutual friend might be going to Galveston. Paul said he wasn’t sure. Then it hit me. I said, “You’re not going to the conference yourself, are you?”

“Yeah,” he said. “This is a meeting of the ABF, the AHPA, and the Canadian beekeepers. We might not have a meeting like this one for a long time.”

“When are you flying down?” I queried.

“I’m driving,” he said. I leave at noon on Monday, and I should be there by Wednesday morning.”

I was speechless. How is it we’d never thought to connect on this trip?

We were leaving the same day. At first I thought I’d ask Paul for a ride to Denver, but then it hit me. He needed a co-pilot for this 1,250 mile journey. When I called back and offered to help with the driving all the way to Galveston, he didn’t hesitate to say yes.

Paul’s not staying for the whole conference. I am, so I’ll still fly back. I’ll take a beating on the non-refundable flight down there and the shuttle, but so what? How often do you get to take a road trip with a friend?

We leave tomorrow. The Denver forecast is for blue skies, and from there it’s all downhill to Galveston. But first we have to get over Vail Pass. They’re calling for a blizzard. 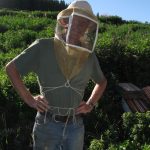