This past year, Bobby and I had a fairly prolific garden. It was so prolific, in fact, we wasted a lot of food (we are shamed like shaved alpacas). We spend a lot of time trying to organize the calendars to meet the crazy demands of our schedule and food can often be the last thing on the list. There are many times we come home from work and can’t figure out what to make for dinner. We thought having a large garden would ease some of that, but it takes a lot of time to properly care for a garden, or just pick the things you want. Part of our problem was that our must-haves far outpaced what we actually wanted to eat, or had room to grow, or time to make.

In total, we had at least 18 different varieties of tomatoes of varying size, taste, texture, and usefulness. We purchased the artisan pack from Johnny’s Seeds and one of my favorite tomatoes came from these – a Bumble Bee variety. Out of the seven varieties included, I only liked the Pink Bumble Bee. Now we have another 60 plants with tomatoes that nobody will eat. We had Sweet 100s, which were delicious, but there were thousands of them and they were so tiny! We had Wapsipinicon Peach tomatoes, which were really cool, but I couldn’t get past the fuzzy. The Brandywines barely made it in the house with the Mister Stripeys and Zebras. Normally, German Johnsons are my favorite, but I didn’t eat a single tomato sandwich this past year (shamed again). The most use we had from tomatoes was 20 Roma plants where we were able to make a delicious sauce out of the majority of the tomatoes. 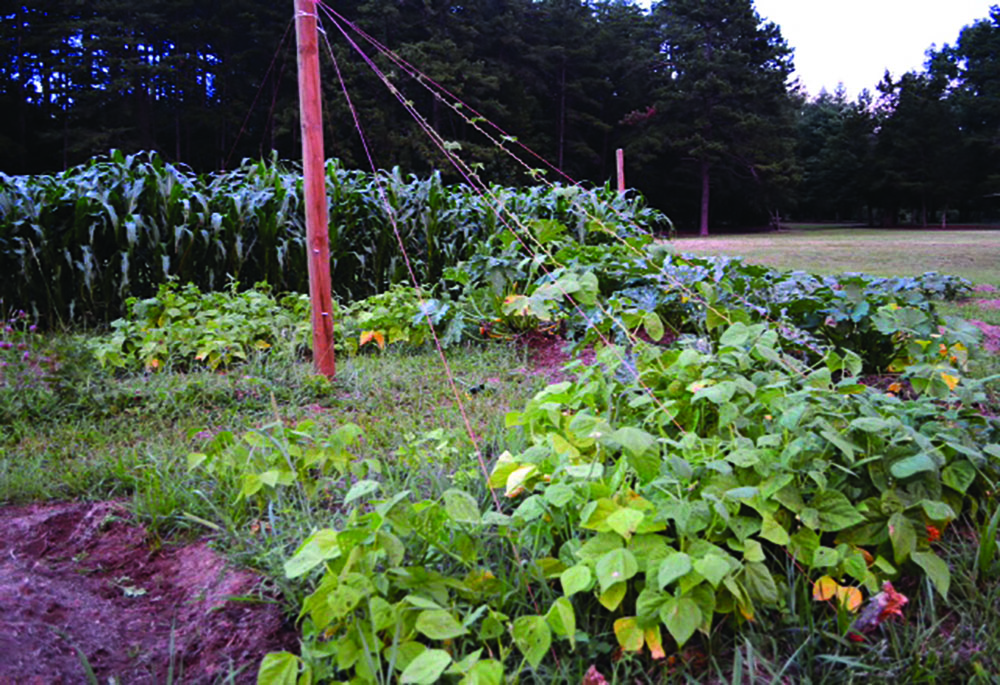 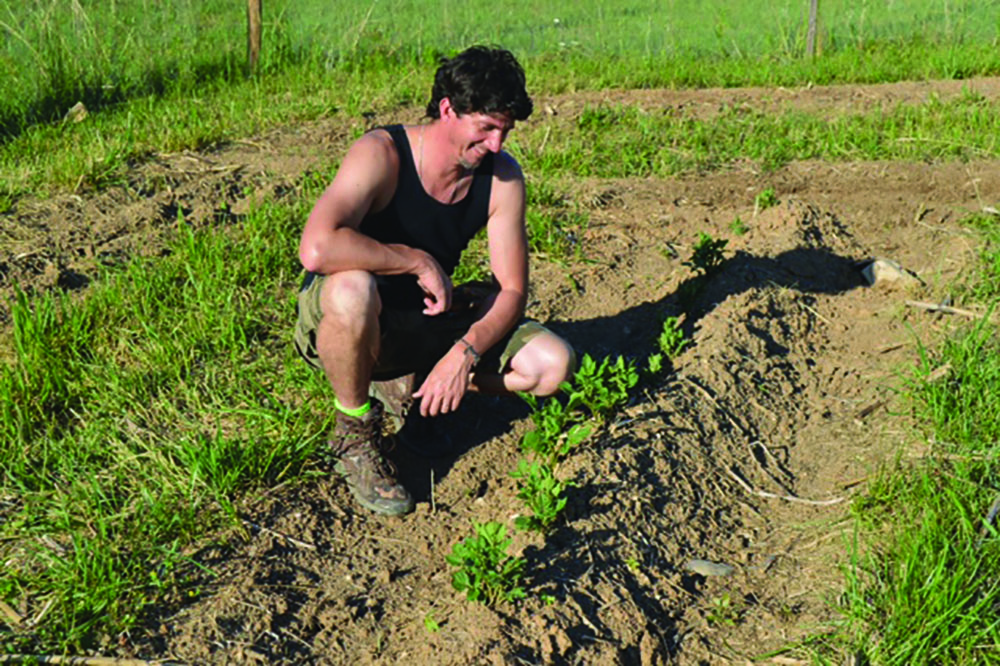 Bobby in the potatoes.

We also tried a few other things. We had tons of beans, okra, squash, zucchini, and corn. Our blackberry vines from last year started to pan out with the first few fruits of their short existence. We had some that did awesome and some that did terrible, but now we can’t find the tags that tell the variety. I think we wrote it down somewhere, and hopefully we can find it at some point. Our beans mostly went to waste because we didn’t take care of them, but they were very pretty. The okra was barely touched, except for the last round that was pickled with some of the habanero peppers that pulled through their neglect. We had a ton of squash and zucchini, and we actually ate a lot of that. I cut it up and put it into pasta at least once a week (pasta is a staple), or cooked it with chicken, or sliced and eaten raw. We still have some in the freezer, but it seems a little freezer burned. This year was the first time we grew a lot of corn, and it was awesome. We had Trinity and Silver Queen, and they were glorious on the grill, or boiled, or even raw. It was delicious. We still had a lot leftover because we planted about a pound of corn seed. We also tried to grow some Glass Gem and Painted Mountain popcorn. It. Was. A. Waste. Don’t get me wrong – they were pretty! They just weren’t worth the effort to grow.

We had a rough time with our melons. They all grew to the size of large softballs, maybe slightly larger, then they either were eradicated by raccoons, or they contracted a disease. I think we might have eaten two of our mini watermelons that were almost too small to actually be considered a melon.
By comparison of our eating habits vs. garden habits, we did a crappy job. Of all the vegetables, the kids eat broccoli the most (weird, right?) and we didn’t grow any. They love corn, but we had more than we could eat because we only did two succession plantings and should have planted at least three or four. We eat a lot of asparagus and actually had it planted, but it was only in the first year so we didn’t have anything harvestable. Strawberries are a pretty big hit, but we did not have the first plant. The blackberries lasted exactly for the second that it took for someone to see a ripe one and then it was gone into the mouth of oblivion. Our edamame did terrible, but the kids love it so we will have to work on that one this year. We only used a couple heads of lettuce that were planted, but the rest of the year when we didn’t have lettuce it seemed to be everyone’s favorite. Our spinach went completely to waste, but then we were buying truckloads of it later in the year. Obviously, we need some work on our planning.

This Summer, start thinking about next Summer’s plan. This year is the year of the Great Planning. Most of my resolutions this year revolved around better planning for the various aspects of our life together to make things a little easier and more organized. I hate wasting so much from the garden because it takes a lot of effort to grow, and it’s so terrible to waste it and spend unnecessarily on additional food. I’m hoping my planning steps can be useful to other people who have issues with over-ordering or under-utilizing their gardening capabilities.

The first thing is to keep a food diary for your family to see what you eat. Not everything is important, but just having a record of the things you eat that you can grow is useful. This will not only give you a good idea of what you can grow, but how much you should be growing. If you are eating a salad once a week, then you could plant some lettuce and spinach, but just a little and staggered so that it would be ready every 10 days or so. If you like to make vegetable soup, you need to calculate how much of each vegetable you need to make one batch, then how many batches you plan to make. Let’s say it takes you 30 Roma tomatoes to make the tomato base, a handful of basil leaves, a smidge of oregano and thyme, three ears of corn, four carrots, two potatoes, 30 pods of peas, 25 green beans, and one clove of garlic. You’d probably be better off buying the produce from the farmer’s market or grocery store first and making a batch to see how many quart jars your recipe produces, and use that to determine how many jars you want to make.

The next thing you want to do is choose all the seeds you want, but categorize them into a few different sections. There’s the “must have” section of the things that you know you will eat or you can’t bear to not have in your garden. The next group would be the seeds that are for different purposes, like bee attractive flowers, or just flowers in general. Another division would be test crops that you haven’t tried before, but want to make sure you can find it useful before you order a pound of seed. The last category would be the “I don’t know what I would do with this, but I want it” section. If you have extra space, or you really want to grow it, but don’t know what to do with it, or probably wouldn’t eat it, then it should be here. For me, that would be cabbage because I think it’s really pretty, but I hate to eat it and nobody here will touch it, except Bobby. Depending on your budget, you’ve now created an order to purchase the seeds from most important to least important (I know, they’re all important, but you get the idea). A suggestion that I have for those extras is to drop them off at your local food pantry if you have time. I know ours appreciates fresh produce.

Now that you’ve chosen your seeds, you need to determine the exact amount of space you have available and what will grow best there. This should help you with the quantity of seeds you order, or to cut down in other places if you were having problems deciding what to order. We are doing something a little different this year with some broken bee boxes where we use them for planters. I think they will be really good for carrots, but Bobby is particularly excited about trying them out. We’ll keep you posted on how that works. Planning the space that you have is crucial to your working system because it can maximize the area if you have an idea of what to put together, or exactly how many plants you can fit in one area.

The last part is making a basic calendar of your gardening activities. This includes the overlap of cool season crops to Summer crops to Fall crops and onward, depending on your zone. You need to know how long you have to put up a small hoop house on your lettuce, estimated germination rates for your seeds to know when to start succession planting, when to add compost to your garden, expected harvest dates, etc. You also want to use this to consider your storage capabilities and see if you need to clear out freezer space, take a canning class, or maybe use this as an excuse to build a gigantic pantry, root cellar, and canned food area onto your house. You know, if you wanted. The point is, if you have a plan in place, you at least can see ahead of time what your schedule might be and where you could potentially have problems.

We’re trying to keep ourselves in check this year to avoid waste and work that is not productive. There will still be some surprise additions to the group, and there will still be plants left by the wayside from neglect and sadness. Hopefully, we will be able to at least do a better job than last year and move in the right direction for next year.