During the 2011 EAS conference, I attended a workshop called “Making Pysanky Eggs” with Carolyn Fluehr-Lobban. I’ve always been interested in Ukrainian eggs but never had a chance to try it. I had a blast in the class and completed my first egg (bee themed, of course!) to take home with me. After that, I decided to foray into the wilderness of egg decorating on my own.

For those of you who may be wondering what Pysanky has to do with bees, the creation of an egg is only possible by using beeswax in a batik method. Batik is called wax-resist dyeing and is only created with beeswax. Basically, you use wax in an area of fabric, or in this case, eggshell, to resist color change to create patterns. Then, you heat the wax to melt it off your medium and show the finished product. Pure beeswax must be used to decorate the egg, and not just for traditional eggs. Although originally it was the only form of wax that was readily available (Psyanky dates back to pre-Christian), there are logical reasons to use beeswax. Most of you guys probably know that beeswax candles are better than all the other candles because they are so pure that they suck impurities out of the air, and they have a higher melting point because they last longer. In this instance, the purity keeps the egg clean because other waxes (like paraffin, for example) have trace oils that can smudge, damage, or completely ruin the dye or pattern on an egg. Also, the higher melting point is much safer because you have to either use an electric kitska* or a traditional kitska, which is heated over a candle flame to melt down the wax enough to draw designs. A lower melting point causes a higher likelihood of explosion. Nobody wants exploded wax on their face (or anywhere else, really). *The kitska is the implement used to draw the wax on the egg. It’s basically a stick with a copper funnel attached by copper wire. Different sized funnels indicate the size of the wax line that will be drawn. 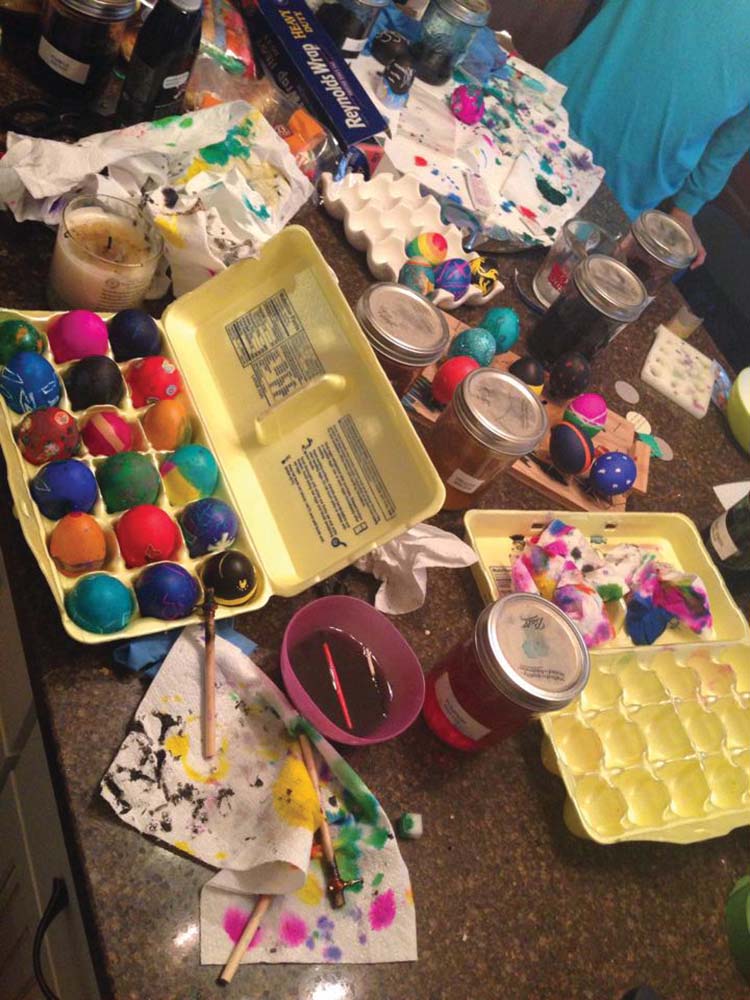 For about the last 1,000 years, the pysanky egg has been associated with Easter. The women of the household would make them for friends and family to be blessed by the priest at Easter, and then they were given out. As with most Christian traditions, pagan rituals were incorporated into the conversion to help with the transition. Originally, the eggs still had religious meaning, but were associated with the sun god. Eggs also hold a lot of myths and superstitions, but are always a sign of life. A family would make sometimes up to 60 eggs during the Lenten season to give away at Easter. 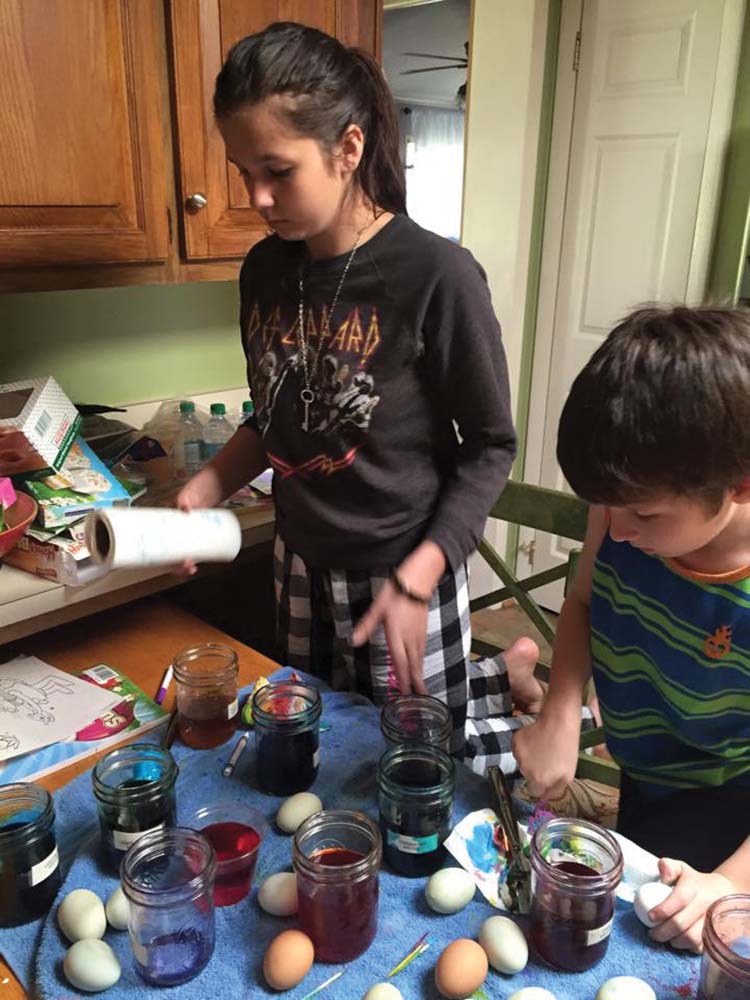 Maggie and George on egg dyeing.

Each egg was created specifically for the recipient, with certain patterns and colors that were meant to bring the most good fortune. Darker colored eggs were given to older people because they had lived so long, while eggs with more white or brighter colors were given to younger people because their life book wasn’t written yet. Eggs were not just made for friends and family. The barnyard would receive at least one or two, the bees would get at least one to ensure a good honey flow for the next year, and the chickens would get one back in the nesting boxes to encourage the hens to lay. Eggs with spiral designs were thought to trap demons for all eternity and keep a house safe. For deceased family members, eggs were put in the casket at the burial of the person. During lent, eggs were made for the graves of family members, and a few extra were made in case of the death of a family member within the next year. Most of these eggs would be made in mostly black and white to symbolize respect for the souls of the dead and mourning. 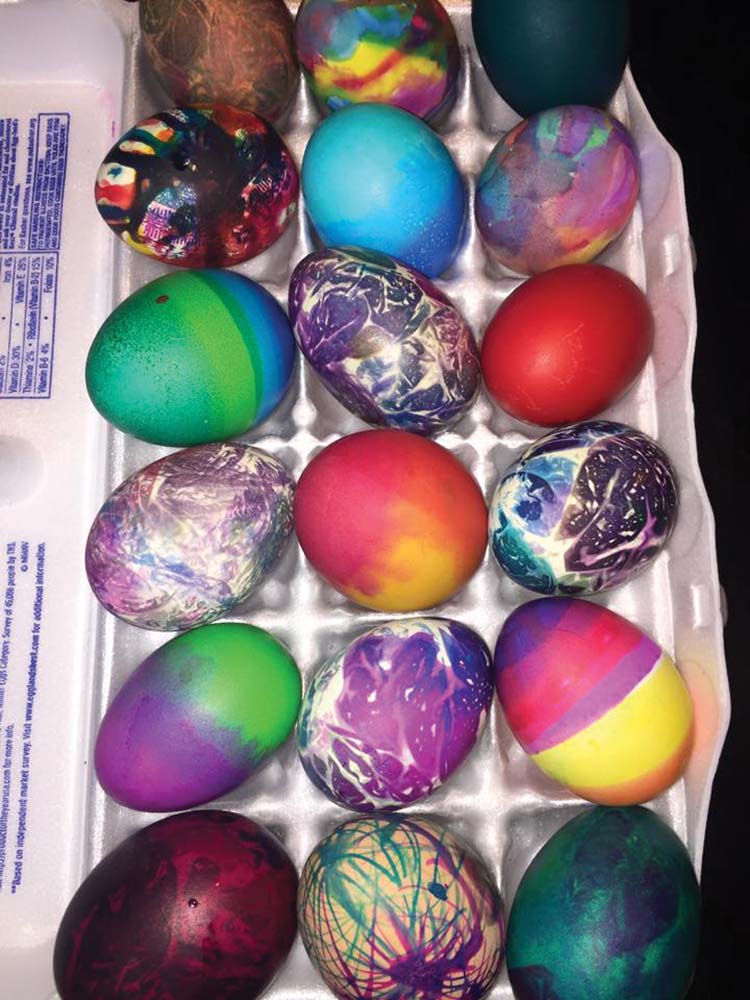 Louque-style Pysanky eggs by the kids.

While in a lot of ways I am a traditionalist, I also like the idea of adding some modernity to something like this that is creatively driven. I like the thought of giving something to loved ones that represents your hope for their wellbeing, and I like the personal touch that comes with a gift made specifically for someone. I can appreciate the hard work to create an egg, but I’m sure you’ll agree that the point in time where you switch from a traditional kitska to an electric one is the day you support a change to modern times. Occasionally there is also the fear of incorrectly using a symbol or a color group that really shouldn’t go together, but that’s a bit along the lines of a superstition – if you don’t know it, then it doesn’t affect you or mean anything.

In 2012, it was the Year of the Dragon for the lunar New Year. My friend Xiaoyan gave me a really cool fish design cutout on red paper that was supposed to bring luck for the upcoming year. She also fed me some authentic Chinese food that she made by herself. I wanted to give her something to start her new year that matched the theme, while giving it a twist to make it a unique gift. This seemed like a good time to try out my Pysanky skills in a non-traditional manner. As a present, I made Xiaoyan an egg that had a symbol of the dragon as the main artwork, with a black dragon on a red background. This is typically an abhorrent color choice because they two together symbolize unrest or unease, but are perfectly fine in Chinese culture. 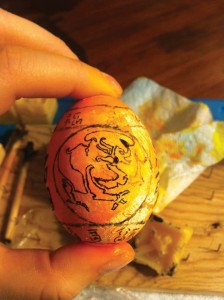 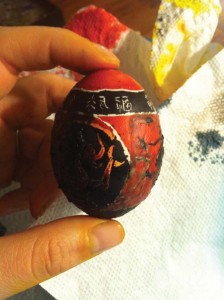 Cleaning the wax off the Chinese New Year dragon.

The past couple years, we have decorated Easter eggs with the kids, but merged the traditional Pysanky with the usual egg dyeing. The Pysanky dyes are brilliant colors that are meant to last; a nice change from the chalky pastels that accompany Easter eggs. The kids all enjoy dyeing in a Pysanky style with the bright colors too, but it can occasionally cause some accidents. Last year, Charlie wasn’t paying attention and knocked a full mason jar of electric purple dye across my mom’s kitchen. It’s mixed with vinegar to make it hold better, and let me tell you – it’s not called dye for no reason. That was some frantic cleaning to get it up before it stained every visible surface. The skin and clothes contact was a lost cause, but everything else was salvaged enough to not notice purple to the untrained eye. Other than the occasional spills, we have a good time with the eggs. Maggie likes the traditional Pysanky a little more than the boys, but also possesses the ability to perform acts of creativity with hot wax and dye (the boys might not have that skillset). In traditional Pysanky, eggs are either left whole for the interior to eventually dry out, or may be poked and have the egg blown out. In our Easter eggs, they are hard boiled for the safety of the egg and the kitchen floor. There is another form of Ukrainian egg dyeing called Krashanky where you dye the egg one color after boiling it to eat for Easter. I like to think we are just combining the two traditions into one Louque family spectacle. We probably veer off the Krashanky course around the time that the egg hunts devolve into a rampant egg attack in a take-no-prisoners war. 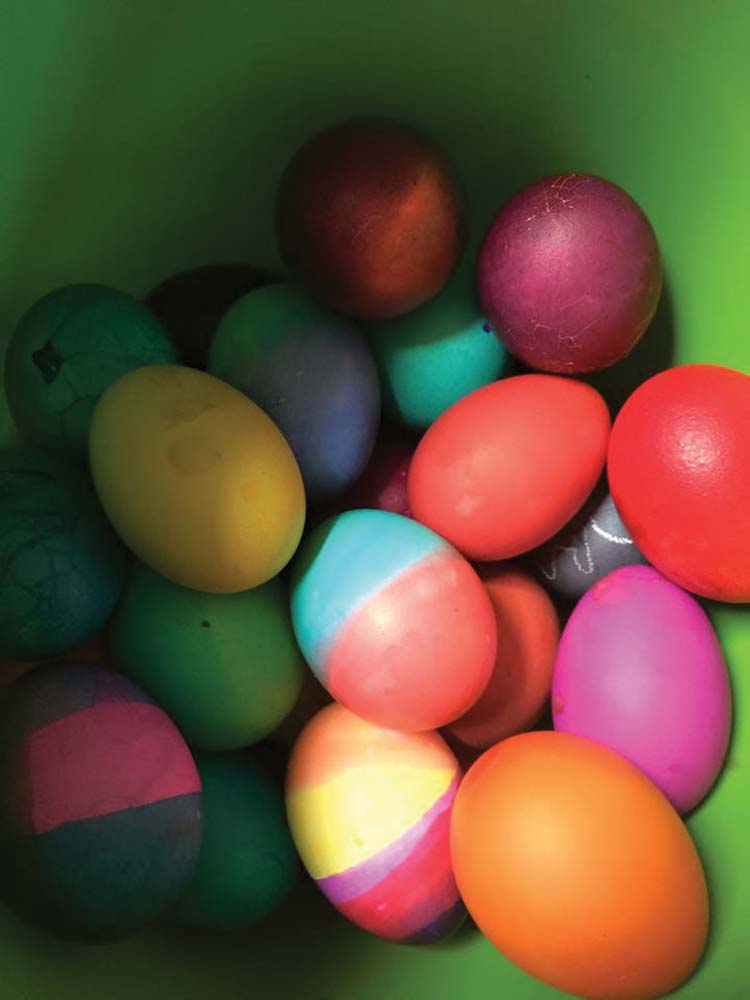 Finished Louque kid eggs waiting to be hidden for Easter.

I am hoping with Maggie getting older that she will enjoy the Pysanky tradition enough to learn the traditional methods of creating eggs. It’s a little exciting because it’s one more tradition we can do together as a family, but a little more time as a Louque ladies activity. Let’s be honest – with four guys in the house, it’s nice to do something sometimes that the guys aren’t even interested in seeing (safer for us, the eggs, the dye, and the surrounding surfaces). My goal is to slowly build up as she gets older in creating eggs for the most important people in our family’s life, and making a holiday tradition that adds excitement to Lent for the anticipation of Easter, as well as including our loved ones in the tradition. Our family, as far as we know, doesn’t have any roots in the Ukraine, but we are hoping to be able to alter just enough of the process to make it special to our family and make it our own. Being able to use a product from our bees while creating a gift that takes thoughtfulness, time, and energy is a great way to connect with our favorite people in a way that is unmatched in personalization and love. Hopefully, the kids will learn how important thoughtful gifts are that don’t necessarily cost a lot of money, but will be cherished for its meaning for years to come.