The Business of Bees: Part III 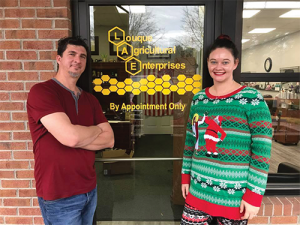 Our office door with the first graphics.

To fuel the side addictions of birds and bees, most people do have to have a real job. I’m still waiting to win the lottery so I can start a farm of pygmy goats and mini-attack donkeys and emus, but since I don’t play it might be awhile. In the meantime, I feed the hobby with some fairly intense honey bee research. It can be a lot, but there’s no denying the education that comes with full immersion into something different, whether it be a foreign language or bees. As of last year, Bobby and I together reached the threshold of completing Colony Condition Assessments (CCAs) on over 10,000 colonies. This is where we go through each hive and record the percent coverage of adult bees on both sides of the frame, then record the percent coverage of honey, nectar, bee bread, capped brood, open brood, eggs, and empty cells. This goes down to percentages of five, and must be done for every frame in the colony, whether it be 20 frame sides for a single deep, or 80 frame sides for a quad. You can learn a lot about bees with that sort of in-your-face work, but what it doesn’t tell you is the background noise of running a business.

We have a pretty small industry in our group, but it’s similar to other types of research. As I’ve mentioned before, honey bee testing is the last in a long line of efforts to put out a product. Similar companies have existed for years at a “Mom and Pop” level where they only do RAC trials that determine the level of residues left from pesticides in various plant matrices, but typically the fruit of the plant or whatever part of that agricultural commodity will come into contact with people. All these smaller companies know they’re never going to get rich, but you can make a good living if you have good people and high expectations for quality work. Getting off the ground can be tricky though. 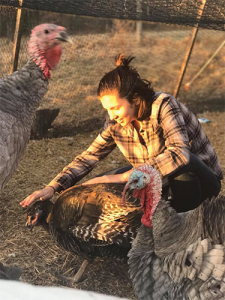 You probably noticed that in the past, I didn’t mention a lot of what was happening, leaving many people to wonder what in the world were we doing over here. I have a bit more freedom now with my own business, but in the end, there’s only so much even I can say. For everything we do, each contact, client, lab, or field team has to have a Non-Disclosure Agreement. A lot of the information is either still in the nascent stages, or the studies aren’t complete. In particular, the pesticide or chemical being tested is not allowed to be discussed until the final report is released. Some of you may have seen my pesticide presentation, either through a bee club or if I taught your applicator’s licensing update, and it has a lot more information on how to find what’s been released by the EPA. Sometimes that can be difficult to find if you don’t know where to look. Aside from the compound itself, a lot of companies jealously guard methodology on how the studies are conducted because you don’t want to show your competitors something that might give them an edge over your work. The biggest part of that comes from how we extract nectar and pollen samples from different types of flowers. Having the correct methodology can mean the difference in hours to days of work to have a sample large enough to use, or you may have just wasted several thousand dollars.

Each business doing contract work also has to have a pretty big policy for liability insurance. Depending on the work you do, it’s likely going to be well above the $1M mark.  When we do the work, we develop an expertise that only experience teaches. However, our end product is literally data. It’s thousands and thousands of sheets of data, usually collected by hand, writing down all of the observations and output and everything relevant to the study. It’s not unusual to turn in over 30,000 sheets of bound data, divided by type of data, to be archived in case the study comes up for review. All of that data is compressed into a final report that can be as small as a few hundred pages or as large as a few thousand pages. Everything we record in the data is about reproducibility. We want to know that if we had to go back and do the study again, we could exactly replicate all of the completed actions that went into conducting the study. In theory, this should give you the same results, although bees oftentimes have a mind of their own and can react differently from year to year just based on weather differences or other uncontrollable variables. In reality, you’ll usually get a similar data comparison, even if the numbers aren’t the same. The liability insurance covers the amount it would take to reproduce a study in the event that all of the data was lost. We’ve had everything from hurricanes to tornadoes, but we’ve yet to have a major crisis where we’ve lost our raw data. 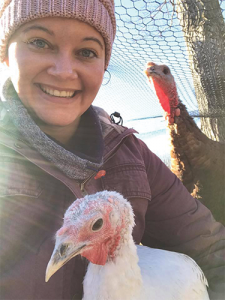 Princess and Devin Jr. in for a photo op.

We also have fairly strict guidelines following the Good Laboratory Practices, which at some point I will write about in the most boring (but informative) article I’ve ever written. To even be considered as a company open for bidding, you have to have job descriptions in place to explain who does what and how it’s covered and what the minimum educational and experience requirements would be for each level, you have to have a master schedule that outlines the expected timing of events for each study on the books, and you have to have your Standard Operating Procedures (SOPs) in place. These are the overview of the basic practices and procedures used by your employees, some of which are mandated, and some are created to fit the needs of the type of studies conducted at the facility. We have SOPs on everything from how we move bees to how we make sugar syrup. This is the method that should be followed every time and how you teach your people to do each process so everything is always as similar as possible. Creating these SOPs aren’t cheap though, because they need to be edited/audited by a Quality Assurance person, and can run you a good few thousand dollars, depending on the extent of your paperwork.

There’s also the equipment needed to run a study. Just starting out, you’ll need temperature monitors, freezers, freezer monitors, fireproof archiving, chemical storage, and a fair amount of other necessities just to pass your facility inspection to be allowed to bid. You also have to be prepared to do the work. In our case, doing Tier II tunnel studies requires rolls of mesh that will cost another ten thousand dollars or more once shipping is paid, and has to be ordered several months in advance for delivery only once per year. Hive equipment needs to be ready to go, and bee packages need to be ordered before you even possibly have a study that will need them. We usually use at least 100 colonies per year in studies, all of which is an up-front investment for the business. This is not including supplies like microcapillary tubes, amber vials, or more permanent lab equipment, like analytical scales that easily weigh to milligrams or lower, and weather stations that are mounted in a field. All of this has to be kept in secured areas, and you have to have everything from a lab/office space to barns with tractor trailer access. 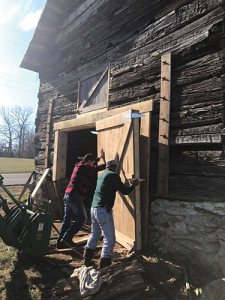 Bobby and Mike putting up doors on the old stable.

You may have seen photos of our sugar rampages, but we go through around 40,000 pounds of sugar a year sometimes. Sugar has to be ordered by the full truckload, which is 18 pallets at a time. These need to be stored in a climate-controlled area that is also kept in a low humidity state. Preferably, this is near your sugar syrup tank with an excessive hot water heater. We ended up having to build a 30,000 square foot ag barn that has a separate section for cold storage with tractor trailer access, a platform for a 500-gallon mixing tank for sugar syrup, and hot water access on the outside of the building. That doesn’t include shelter space for trailers and other equipment. We ended up having to “remodel” two of our old tobacco barns where we can store the hundreds of hive bodies and frames and feeders so they aren’t out in the weather. It’s a good excuse for one of them to be repaired though, as it was built by my family well over a hundred years ago and needed some attention. The other also could use the repair, but it was just a silly 60 years old or so, practically an infant.

This is just the basic outline of what it takes to run headfirst into a bee research business, not counting health insurance, employees, training, meetings, and the terrifying thought of no guaranteed paycheck and having to take care of your people and family. I think we’re off to a good start, but time will tell. In the meantime, if you terribly miss the turkeys, you can stalk pictures on my non-private Instagram account of queenofthebees2016, and you can find Louque Ag on Facebook and see our cool old barn being fixed by our agronomist and Bobby, or pictures of our trailers and other things we think are fun to post.

Jessica Louque is a Research Scientist – Apiologist. She and her husband, Bobby, run Louque Ag, a Contract Research Organization (CRO) in North Carolina.

Shaloo Tiwari   TheHealthSite.com Growing beard and grooming it well has recently become a trend that seems like it is here to stay. Many…