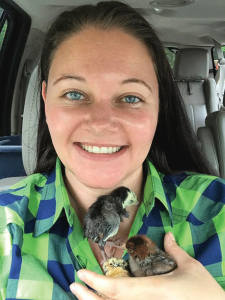 Bring baby turkeys home with the sick emo turkey at the top.

Sometimes, I get a few complaints from readers that my article has nothing to do with bees, or is vaguely related to bees. This is going to be one of those articles, so if you don’t ever plan to have turkeys, skip this page! Otherwise, here’s some words of wisdom to those of you who are in the process of homesteading and thought you might want to get turkeys one day.

I ordered turkeys last year from McMurray Hatchery. Usually I go overboard researching things before I do them, but I didn’t realize what I needed to even look for when the turkey craze started. I thought a mixed order from the hatchery would be my best bet and go from there, and I’d be good to go. When they came in with an order of chickens and guineas, I was super excited but maybe also vaguely concerned about how dumb I was to order so many birds at one time (I’m not telling you how many, but let’s just say there’s a minimum order for shipping and I definitely exceeded it). The turkeys were little weirdos right from the start, but I loved their little knobby buttons on their heads and their inquisitive nature. 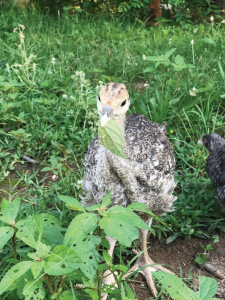 When you get baby birds, they are always so cuddly and precious and snuggly, mostly because you’re warm and they’re not so they love you because they have no choice. Give that a day or two and guinea keets will scream their head off to keep you away from them and trample each other to death to get away. Chicks might not run away, but they don’t really run to you either. Peafowl are outright stuck up about people unless you raise them by themselves and they have to bond to you. Turkeys, however, seem to really bond with people.

It’s probably not even possible to explain how much I now love turkeys. I’d say it’s a good possibility that I won’t ever be able to eat a turkey on our farm, so they are essentially useless as a meat source. Once I know what they’re good for out here, I’ll be sure to let you know. They are just the sweetest things, and once you spend some time with them, they will follow you all over your yard and bark at you and cheep at you and make these adorable little noises when they’re happy, kind of like a cat purr but in a bird form. None of the other birds make noises like the turkeys. 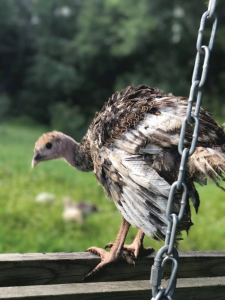 A baby turkey sitting on the edge of the swing set.

When they were little but just made it outside, I would take them kale and feed them from the chicken tractor door, which taught them to run to the door when they saw me coming. Sometimes, I would go all-out and boil them eggs, put chia seeds on it, get some blueberries, and add some kale for a super treat. In fact, that’s the breakfast I made on Father’s Day – for the turkeys. Not Bobby. He’s a good sport, though.

If I sit on the swing outside, they will hop up and swing with me. One learned to swing on my foot so it’s like it had a mini-swing of its very own. They also only want to eat and drink if I sit with them to do it, which is really cute but kind of sad. Now, they sit at the back door and stare in at the cats waiting for me to come outside when I get home from work. They’re on a cat watering fountain because sometimes they’re too stupid to drink “flat” water and have to hear it running to know that it is water. The cats have to drink out of the dog bowl, and I’m fairly sure they resent losing attention to outside birds more than normal. 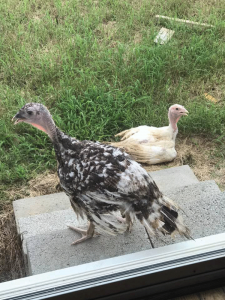 Soon to be “house turkeys.”

The most unfortunate thing with turkeys, now that I’ve told you the fun parts, is that they die. The war with turkeys to keep them alive is ridiculous. I don’t mean like, one or two or five die after you receive them like occasionally happens with poultry shipments, but they seem totally healthy and then the next day they are dead. Here are some of the things that have happened to me, why I think it went wrong, and what might be done to rectify the situation.

1) Ordering with chicks – I wanted to raise them with chicks because I had read that turkeys have a hard time learning to eat and drink without a chick to teach them how. It seems that they are a little worse off than normal poultry babies without their mother to teach them, and can die by overeating or drowning easily. They immediately went into our brooder with the chicks that came in, and I learned later this is a big no-no because chickens carry a worm that is spread to turkeys and causes a disease called Blackhead. It doesn’t really affect chickens, but it can kill turkeys and peafowl. For the first four weeks or so, they were in the brooder (it’s maybe a 50-75 gallon water trough on the back porch) and I think I only lost one and it really wasn’t in great shape when it arrived. I had no idea what kind of turkey it was since I had ordered a random assortment, but we called them the emo chicks because they looked like they had a black teardrop under their eyes. Once they were older I think they were called Royal Palms, but I’m not sure because none survived to eight weeks. Once we put them out into the chicken tractor, the turkeys just started dying. One day, I lost four in an hour. Overall, I don’t think the Blackhead disease is what killed them, but I think I had too much competition within the area. I did notice that some of the turkeys were prone to laying on the ground, and they looked almost like they were stepped on and damaged. It is considered an absolute no-no in commercial circles to mix chickens and turkeys, but there’s no way there’s an inch of space here that hasn’t been walked over or pooped on by a chicken or a guinea or a quail. This seems to be up for debate as some people seem to successfully raise their chickens and turkeys together, but the major downside here is that the only medication that seems to cure Blackhead is now banned. Some people have luck with cayenne pepper, but there is no real, accepted cure for the disease.

2) Not understanding their shortcomings – they will literally starve to death or overeat, drink themselves to death or drown or thirst to death. Turkeys need a lot of babying when they are young. A LOT more than you would expect with normal poultry. They just don’t do as well without their mother to teach them, so they become these anarchist rebels that try everything without understanding anything. They will die of thirst next to a waterer because (I learned this too late) that they don’t understand how to drink water well and they don’t like stale water, so if you don’t replace the waterer every day, they won’t drink it. They don’t always understand that the same waterer is their water source if you move it from where they expect it to be, and they don’t do well finding new waterers. I had to switch to the “pet fountain” which entails dragging an extension cord around the house and out to the turkeys, but they love running water so much better. They also have a difficult time eating because they will peck at most anything that is definitely not food. You have buttons on your clothes? Peck. You have shoelaces, a watch, a ring, nail polish? Peck. You have camo pants that look like plants in the pattern? Peck. You have a handful of food, a hanging feeder, a trough feeder – no peck. Maybe on the feeder itself, but not into the food. It took a couple tries, but they LOVE egg whites. I am not sure why, but they don’t like egg yolk. After sitting with my babies and losing all but two of them, I think they died mostly from stupidity or being stepped over.

3) Not researching breeds – I should have ordered a heritage assortment. Somewhere in not paying attention, I ended up with these super sweet big blue eyed babies that can barely walk because they are so bow-legged and get so big they can’t really stay mobile. My white giant and broad breasted bronze (the two that survived) both will get so large that they cannot physically reproduce, will not be able to fly, and will have difficulty walking. I might end up pity-eating them but for once, I’m not sure I could eat my turkeys. In my next run, I will be ordering heritage turkeys only, and will just get turkeys so I can focus on them. We will see how that goes, as I am trying to talk Bobby into letting me get another batch of turkeys for my birthday in August this year. They are pretty expensive for the spectacular failure I’ve had so far, especially with the heritage babies. Hopefully my mistakes can be rectified the next time around.

If I can talk Bobby into another batch of turkeys, there will definitely be some things done differently. I will most likely start them with cayenne pepper in their food to help prevent a few things, and keep broiler booster in their water for at least the first month. I’m not sure how that works with a pet fountain filter, but I can take that out if it doesn’t go well – the moving water is more important. Most important of all is that you know, if they get cold in the Winter and I can’t get them little turkey sweaters, I guess they’ll have to be house birds and roost in the living room. Bobby can make them a turkey couch perch for Christmas. I won’t tell him about that until after he agrees to the next shipment though.