This was going to be the year. We were determined to harvest honey this year. I hadn’t had a honey crop since the year before I was married. Something about suddenly adding four kids to your every day life seems to suck a lot of your time into other activities, I guess? This year, the kids are old enough to either leave (temporarily) them to their own devices or have them help us in the bees. We made a specific effort to make time for the bees, even at the expense of some other “necessary” chores. I should probably take this time to apologize to all my (one) neighbors who have had the privilege of watching our yard slowly grow into a jungle. The quail were a good excuse to not mow, or giving the birds a hiding spot from the hawks trying to eat them. Maggie finally passed the weight limit safety cut-off on the mower without filling her pockets with rocks, so we can get her out to bring down the grass to a manageable level while we worked in the bees. 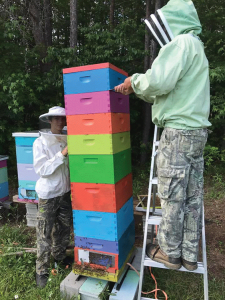 There was a little more interest in honey extraction this year. Annie Krueger, an intern on a two-year appointment with the Bayer Bee Care Center, had started a research project with the massive quantity of hive scales left over from other bee studies. She was giving them to local beekeepers with the expectation of keeping basic records on what happened to the hive (added a super, fed it, moved it) and uploading the data every Tuesday. She was taking the data, putting it into some sort of reasonable semblance of summary, and then explaining what appeared to be happening across the area. At the time, the largest hive in the project was around 270 pounds. I was pretty sure that one of the hives that I was babying would be larger than that, so I told Annie that I wanted to join her project. I can tell you if you haven’t guessed that Bobby was NOT excited. To better enjoy this description, please imagine Bobby’s reactions throughout these events. I gleefully took home a scale, only to realize I had not thought through some of the logistics.

Big Bertha was sitting on a hive stand in all her glory of four deep supers being used as brood boxes and four medium supers for honey. We came home, trying to beat a rainstorm, and realized there was no way we could lift the hive up to get a scale under it. The next option was to take it apart until we could pick it up and get a scale under it or move it over and set it back. I could not hold it and slide a scale under, so we moved it, put a scale down, then moved it back and put all the pieces back together. 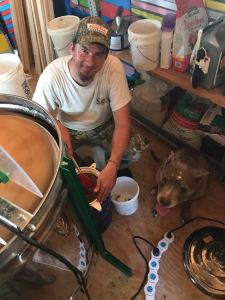 While you’re imagining Bobby’s fantastic facial expressions and otherwise disgruntled figure, keep in mind that rainstorm I mentioned was a very large storm and the clouds were already over us and the wind was picking up. Various pieces of yard trash from our neglect were rolling across the driveway like tumbleweeds. We’ve also taken apart a hive large enough to support eight boxes during a barometric pressure drop in rising winds. The bees were almost as happy as Bobby and starting to let us know it.

So, we get it ratcheted, and I realize that Big Bertha now looks like one of those playground toys where you ride a zebra attached to the ground by a spring. Bobby’s face now mirrors the oncoming storm as I tell him (yelling over the wind, actually) that we’re going to have to take it apart again and set the whole thing on the ground. We dissect the hive AGAIN and set the bottom most boxes on the hive scale, which is now relatively stable on cinder blocks. Or so I thought (which was wrong). We get Big Bertha back together, and realize the scale is still wobbly, but it’s because we need to move the entire hive over about a foot. Something that’s not level on a hive that’s three or four boxes high is not as bad as eight high. Instead of taking the hive apart for the third time, Bobby holds the hive “still” while I sit on the ground and kick cinderblocks under the scale to slide it over without picking anything up. I assure you, I was just chock full of great ideas that day. 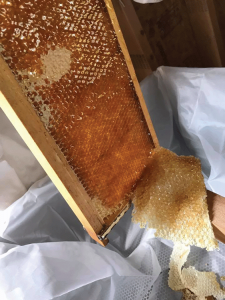 Finally, she’s on the scale, on the ground, and the wind settles in to pull in the storm. Big Bertha is waving like a surrender flag, trying to topple all our work. I took a hive weight just to confirm that the scale was working, but even if it wasn’t I would not have told Bobby right then. Big Bertha was starting at 320 pounds! While this was really cool, that’s a lot of weight not distributed well to withstand weather. Best idea of the day: moving our Ford Expedition to the side of the hive to ratchet it to the luggage rack. Not only did that pull too much, but it blocked off the other hives on that side and made them join the anger flight taking place around us. In the end, Bobby made some lean-to support beams that wedged into the ground to hold Big Bertha up against the wind and using her own weight to keep the beams in place on the slant. This didn’t do a lot to stop the swaying because the wind really picked up and maybe it had started the first taps of pelting rain. The last great idea of the day (probably my only good idea but a day late and a dollar short, as they say) was to take the top supers off, cover them with lids, and ratchet Big Bertha without them to make it slightly more aerodynamic and not top heavy until the storm was over. These bees were our best friends now, and wanted nothing more than to cuddle our faces with their stingers. This is probably the only reason Big Bertha survived that storm.

It was hard to leave the hive alone for the first few weeks because I wanted to go out every day and see what was happening. In some cases, she would grow around three to five pounds a day! I learned that according to the scale reader, the heaviest weight of the day is the 8:30pm reading because all of the foragers have come home but they haven’t been inside long enough to eat all the food stores from the day’s foraging. It wasn’t all weight gains though, because we have had such a crazy Spring and had about 15 inches of rain in April and May during the time that I was recording scale data. There were a few times that the bees were stuck inside the hive for days on end while it rained constantly. Those were disappointing days because the hive would lose so much weight sustaining a giant colony. 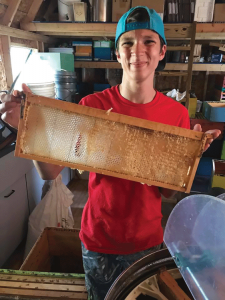 We eventually came to the day where we had time to do some honey extraction, which was when Big Bertha reached a little over 350 pounds. We knew not all the honey was ready, but we figured we’d give it a shot while there was time to do it. Charles in particular helps in the bees more than the other kids, and he came out to help for most of the day. Maggie and George even helped for a little while, but the bees learned how to get in the hole that runs an extension cord inside, and it was around a hundred degrees during extraction. They lost interest other than quick trips out to see how it was going. We took supers from Big Bertha and a handful of other hives and brought them into the honey house for extraction. Maggie, Charlie, and George all had a chance to try their hand at uncapping frames and watching the extractor. After a good 12 hours, we ended up with a huge mess and around 27 gallons of honey. Based on the weight loss, we took around 160 pounds of honey from Big Bertha, maybe reducing her to just “Bertha” by then. 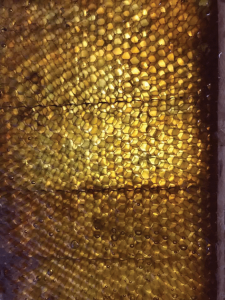 Since honey extraction, the hives have either vaguely held steady or slowly lost weight. We have scales on a few hives in other places to compare the honey flows in different areas. Honestly, we moved almost 50 hives to four other sites to reduce the competition for Bertha to grow. We now have hives in Caswell, Alamance, and Stokes county, although they will probably be consolidated for the Winter so we can manage them better with supplemental feeding and Varroa treatments. I don’t know how long Annie will keep her project going, and maybe she doesn’t know either, but it will be interesting to have a year’s worth of data to compare to next year and see how much it changes. We don’t really have a “normal” anything in the climate here so I don’t know how comparable the data will be. If you’re an NC beekeeper and you’re interested in participating in Annie’s project, or you want to read more about it and the weekly findings (updated on Wednesdays, usually) check out the website at: https://beehealth.bayer.us/bayer-bee-care/bee-care-research/hive-scale-research#phcontent_12_divAccordion.

Self Pollinating Almond A Reality In Australia From National Rural New, Australia. Written by Clint Jasper Fears about pests and diseases that could wipe…