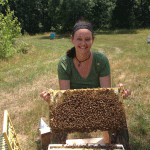 Shades of Blue and More

At the beginning of the year, I was super excited to plant a blue pollen garden. I was fairly sure that some of the flowers would just be blue instead of producing blue-tinted pollen, but it was still going to be GREAT. In the off chance that Bobby doesn’t know exactly how much I spent on seeds, I will neglect to mention the cost, but let’s just say that I ordered anything and everything that looked blue or promised blue pollen on any obscure beekeeping site. With the purchase of the tractor and complementary implements, our garden expanded substantially this year, but not necessarily for the better. 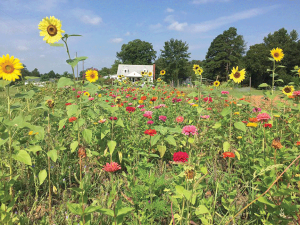 My best estimate would be that we planted about a quarter acre of pollinator-attractive plants to be blooming for most of the Summer. The first was a strip along the field in the front (about 0.2 miles) to be pretty coming down the driveway. There were plots of successive buckwheat, clover, sunflowers, and patches of random mixed forage. In the midst of this, we also had corn, beans, tomatoes, squash, zucchini, melons, cucumbers, and pumpkins.

Our clover pretty much was worthless. The crimson clover did okay, but it really should have been planted in the Fall. Our vetch from four years ago still comes back fairly well in front of the fruit trees, but this clover – it won’t be back. We did a round of sweet yellow and alsike clover, and we may as well have planted grass for all the blooms it produced. It was not really differentiated from the chicory because they all looked like weedy grass, except our weedy grass had flowers. 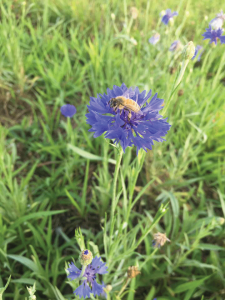 There was some success with borage, but it was fairly pitiful. The flowers that were produced were ravaged by the honey bees and bumble bees, but they were delicate and didn’t hold up well to our harsh
Spring storms. We didn’t have a particularly high germination rate in this patch. I believe we bought a half pound of borage seeds, and on a really good day of optimistic guessing, we might have had 50 plants blooming. Next down was the cornflower section, and it totally overshadowed the borage. While it wasn’t as successful as I had hoped, it filled in well and had lots of flowers. This was another half pound planting, and was pretty high up on the popularity ladder with the bees. It bloomed more or less continuously for about six weeks before tapering off. However, a second patch in a different section didn’t do well at all with a mix of other flowers. Neither the borage or the cornflowers produced blue pollen, but they were definitely bee attractive. 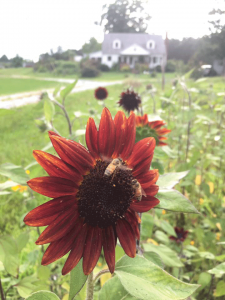 (about a foot tall at best) to a middling 4-5’ tall series of lemon, burgundy, and chocolate sunflowers. Everything in the yard loved the sunflowers, and they bloomed in a perfect synchrony where one variety started just as soon as the previous one ended. The weird thing was that some of them were mammoths, and nobody cleared five feet. There was a pollinator mix planted separately with mammoths, and they also didn’t even come close to being tall.

The highlight for my blue pollen was viper’s bugloss – because it was the only blue pollen I could verify. The bugloss surprised me because it did really well and topped out at around three feet with prolific blooming. It also did really well mixing with other flowers. I saw several types of bees visiting these, but honey bees only cared if it was in the morning. Later in the day, they would totally ignore it and go straight for the cornflowers and sunflowers. The bumble bees and carpenter bees were not as picky and would visit them all day. The plants started blooming the fastest of all of the seeds at around six inches tall, and continued to 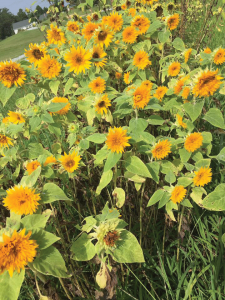 bloom and grow until late Summer. We had a few oddballs with white and pink flowers instead of blue, and they had light yellow pollen. It looked nice with the other flowers and added a good undertone of blue. In the end, the mixed plot for this section only produced something along the lines of bugloss, gomphrena, sunflowers, and a couple varieties of zinnia. I would consider it a success though because that spot is covered in butterflies and bees. There’s also a much larger contingent of small songbirds now, with black and yellow finches standing out brightly and nesting in the trees near the sunflowers. There have been at least eight species of butterflies and 10 species of bees in this flower patch that I’ve seen, even without particularly paying attention. Nothing seems to be overly attracted to the gomphrena, but they are outstanding with vivid colors so bright they don’t look real. I would plant them en masse again just for the color.

The mix section was meant to start up at the back end of a buckwheat plot, which did well as always. Buckwheat has been lauded before in my articles for its 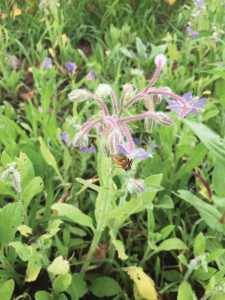 durability and stubbornness, but it really is a fantastic plant. We had two sections reseed themselves twice with enough viable seed to have 100% coverage in the same plot. It absolutely did not do well in a mixed flower planting. I thought with the way it grows that it would be fine, but apparently it does not like being social with other species of plants. Speaking of the mixed plot, the buckwheat was planted in mix plot #2, which was basically a total failure.

We’ve had a small garden of some sort in the same spot for the last few years, which is almost entirely flowers (sometimes some vegetables) because it’s in front of the fruit trees that block off the hives in the back. We put in a specific pollinator mix in this section, and we ended up with what appears to be a single sunflower, three echinacea plants, and maybe a dozen cosmos. All of those are covered in the most horrendous weed patch that was apparently better suited to the spot.

With all that being said, I’m sure it seems like we had a pretty bad attempt at 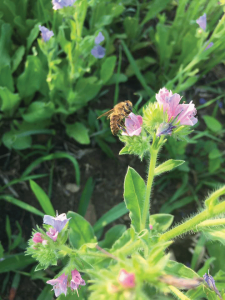 flower growing this year. I think it turned out a little better than it sounds, but certainly not good enough to keep me from being disappointed with the lack of variety. Here’s some of our practices and what might have been a hindrance or went wrong for us:

The Bermuda Triangle of Weather Patterns

Where we live currently has the strangest weather patterns that I’ve ever seen. We can go to the top of the driveway and watch the rain stop at the red barn a quarter mile away and be dry as a bone at our house. We had tons of rain until the end of June, then didn’t get a single drop of rain again (unless it was literally a single drop) until the end of July. We had about 10 days in the high 90’s with 70+% humidity and no rain in sight. When we did get rain though, it was monsoon season. We would get so much rain that the water would shoot out of the drainage and explode in an angry current down to our neighbor’s pond. Even a couple days after the rain, various patches would be squishy still. I don’t think the plants ever got used to this complete lack of pattern.

Our soil here is terrible with less than half a percent of organic matter. If you dig down a foot, I’d say you’ve made quite an accomplishment because the ground is so hard, but you won’t get much farther digging through the bedrock and clay without some heavy machinery. Bobby tilled in over $1,000 of compost amendments, and it was fairly obvious where those sections were. The plants either were burned from the compost, or they grew to what appeared to be almost a real plant size. The ground still looks horrible, but hopefully the green manure from this year being tilled in will add some nitrogen and make it less awful next year.

We had a lot of issues with stem borers building up over the years affecting our cucurbit crops, but most of our problems were not of the insect variety (except Japanese beetles. They are always a problem). We had raccoons murder our corn, possums and mice and rats eat our melons, and worst of all, the deer would nest in our flowers and beans like we had planted for the sole purpose of providing cushion for the entire local deer community. What wasn’t being trampled was being consumed. They crushed our tender pumpkin and melon vines while munching the sweet potatoes down to tiny nubs. We had a fence that didn’t fool them in the least and they pranced around and over it like it wasn’t there at all. The short term fix was to shoot fireworks at them at night to scare them away.

I do think this combination of unfortunate events led to a significant amount of germination failure in our seeds. Some of these things will be remedied shortly. We discovered the joys of electric fencing after the bear debacle with the bees, and have been chicken-murder free since the installation around the coop. The chickens didn’t have a problem navigating the wires, but no raccoons or opossums have managed to get in the coop. On that same line, we used the tractor, dug out holes, and put up an 8 foot fence around the entire front field. Bobby ran the same low wires to “discourage” (i.e. throw via electricity) raccoons and smaller vermin, while running the rest of the wires all the way up to keep the deer out of the area.

Our plan is also to dig a new well in the front for irrigation, and maybe also the house. Since the house is so old, it has an 80 foot hand-dug well and causes a lot of anxiety during a drought. If we put a good well in the front, we can run it to the house and use it to water the front and side gardens, while still using the old well in the backyard. We would have better water pressure and not be quite so dependent on the crazy weather patterns here.

Compost and topsoil additions definitely help, but I’m not sure we have enough money to pay our way out of that problem. For our flowers next year, we may have to resort to plain old fertilizer to boost them along, while slowly amending the soil. With some time, we may be able to get it up to par.

All of this was a little annoying and depressing, but it was really not a bad start for megasizing from where we were in years past. We have learned a lot from this in both successes and failures, and of course will try again next year. Here’s to better luck for 2017!